More hits than misses in this sequel. B 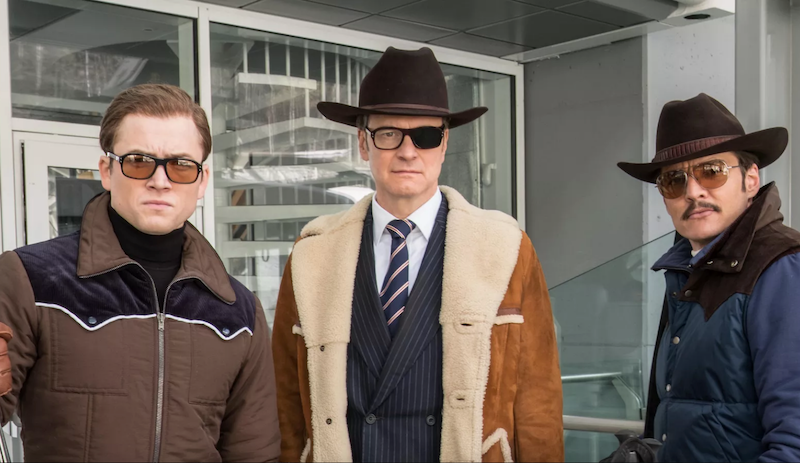 Kingsman: The Secret Service, the original film in the Kingsman series, which arrived back in early 2015, was something of a pleasant surprise. It was a British action spy comedy that was simultaneously parodying the James Bond iconography and reveling in it. Sure, the film was crass at times and rough around the edges at others, but it featured expert action from director Matthew Vaughn, a wonderfully counterintuitive villain performance from Samuel L. Jackson, and above all, a fun spirit.

The sequel, Kingsman: The Golden Circle, is like the first one, only more so, and I mean that in just about every sense. The action is still super-stylized, with some of the best-choreographed action-adventure scenes in recent memory. It’s also way too long, with about twice as much plot as necessary, quite a few elements that don’t quite work and multiple flirtations with bad taste.

What sets the new movie apart, though, is one great idea: While the first film was built on an exaggerated version of Britishness, the second does the same with Americana. Whereas The Secret Service was about James Bond, Scotch, and really nice suits, The Golden Circle is all about such American iconography as Kentucky distilleries, 1950s diners, and baseball.

Taron Egerton returns as Eggsy, the working-class kid initiated into the Kingsman society in the first movie. Now, after an attack on headquarters, Eggsy and his majordomo (Mark Strong) must head to America, where they’re introduced to Statesman, the society’s U.S. counterpart. Their agents include Channing Tatum, Halle Berry, and Pedro Pascal, doing various stages of Western cosplay. As for mentor Colin Firth, who appeared to die in the first movie, he’s back, but I won’t get into how and why.

Of the new characters, Pascal is the highlight, doing an extended Burt Reynolds riff while wielding a Wonder Woman-style lasso. As for Berry, she’s given less to do than the time she was an actual Bond Girl, while Tatum isn’t in the film nearly to the level that the ad campaign would have you believe. And the villain is Julianne Moore, doing a sing-songy voice as an incongruous drug lord, whose Kurtz-style Cambodian hideout is decorated like a ‘50s small town, complete with diner, salon, and theater.

What works and doesn’t is roughly in line with the original movie. The action is exemplary, some of the best-staged stuff in any film in recent memory. The style of the suits and headquarters is first-rate, and that goes for the new American locations too. The film, in dialogue and storytelling, is consistently funny.

As for what doesn’t work, aside from the muddled plot and inflated, 2-hour-and-20-minute running time, a certain scene involving the implantation of a tracking device is meant to recall the original movie’s climactic anal sex joke, but it comes off as disturbing and a little rapey. Moore’s part of the movie is a little too weird to work, while a plot point involving a worldwide disease looks way too much like an AIDS metaphor to work for laughs. An extended cameo by Elton John doesn’t really work until the end. And while the movie hints at having something to say about drug policy, its heart is pretty clearly not in it.

Still, if you’re a fan of the first Kingsman, you’re exceedingly likely to enjoy the second.

Ben Stiller Suffers Through Middle-Aged Jealousy in <i>Brad’s Status</i>. B+

For awhile in the early 1990s, especially at the heights of the grunge era, a huge amount of pop culture oxygen was taken up by the notion of “selling out”—who was doing it, who wasn’t, and who was pure enough to avoid it. A foundational text of this mindset was 1993’s Reality Bites, which Ben Stiller both directed and starred in, as a character we were meant to think was a detestable sellout mostly because he had a job at MTV.

Now, nearly 25 years later, Stiller once again examines the selling-out question in Brad’s Status. This time, Stiller’s on the opposite side: As a sad, middle-aged man who didn’t sell out back in the ‘90—but really, really wishes he had.

Brad’s Status, written and directed by the suddenly prolific oddball filmmaker Mike White, is a hugely cringe-inducing but still very poignant comedy-drama about a middle-aged man consumed with envy and jealousy. It’s one of those movies that’s going to strike closer to home for a lot of moviegoers than they would prefer to admit.

Stiller plays Brad, a guy in his late 40s who runs a non-profit, lives in a reasonably nice house, and has a wife (The Office’s Jenna Fischer) and son (Austin Abrams) who appear to genuinely like him. But as we learn from a nearly nonstop internal monologue, he’s fantastically bitter and jealous of the fame and success of his college buddies. Played by Michael Sheen, Luke Wilson, Jemaine Clement, and White himself, they’re people he never sees and only really checks up on via Facebook.

The plot has Stiller on a college visit to Boston with his teenaged son (Austin Abrams), a music prodigy with a shot at getting into Harvard or Tufts. Throughout, he thinks and talks about his old pals a lot, leading to an actual in-person meeting with a delightfully smarmy Sheen.

The best scene in the movie, by far, is the one in which Stiller is confronted by his son’s friend (Shazi Raja), who tells him what the majority of the people watching the movie are probably thinking. The film’s ending is also both unexpected and just right, and the whole thing is boosted by a first-rate score from Mark Mothersbaugh that doesn’t sound much at all like the composer’s work for Wes Anderson.

Stiller is wonderful here. Even in his hit ‘90s comedies, he was always somewhat put-upon, and lately (especially in Greenberg and While We’re Young, both directed by Noah Baumbach) those roles have taken on a more bitter asshole-like tone. Here, though, he’s more of a depressed sad sack, which is somewhat different for him. Stiller was in another movie, the underappreciated 2004 comedy flop Envy, with a similar conceit—that was the one where Stiller’s friend (Jack Black) becomes wealthy after he invents a spray that makes dogshit disappear, leaving Stiller stewing with jealousy.

The irony? Ben Stiller is, by any measure, much richer and more famous than any of the actors playing his supposed adversaries. But I still had no trouble believing in this character’s baffling, crippling insecurity.