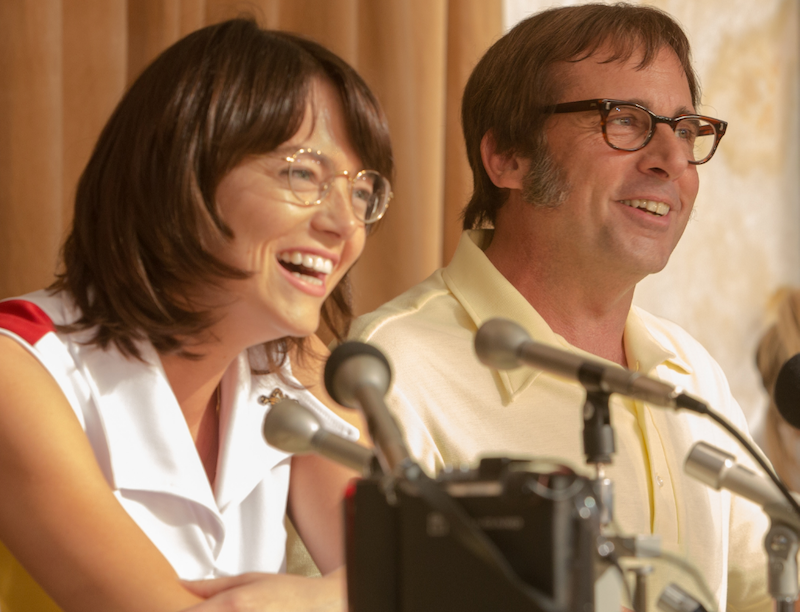 A sports story from the past gets told very well, yet again, in Battle of the Sexes, the new film about the famous tennis match in 1973 between female tennis champion Billie Jean King and male has-been-turned-hustler Bobby Riggs.

The film was written by Simon Beufoy and directed by the team of Jonathan Dayton and Valerie Faris (Little Miss Sunshine and Ruby Sparks). It follows King (Emma Stone), through her protest for equal play for women’s players and establishment of the Women’s Tennis Association, as well as her initial coming to terms with being gay, via a relationship with a hairdresser (Andrea Riseborough). This leads up to her matchup with Riggs, portrayed as a charismatic but pathetic hustler, who Steve Carell plays with more than a touch of Michael Scott’s combination of insecurity and grandiosity.

This isn’t just a history lesson—it’s an entertaining treatment of a well-known and important story. Battle of the Sexes lands the social import, but isn’t preachy about it—with a couple of brief exceptions—and aside from some slight fudging of the dates, it gets the history mostly right. And the casting, down to the smallest roles, is uniformly fantastic.

Battle of the Sexes reminded me a bit of Michael Mann’s Ali, from 2001, another historical sports film that got the period look just right, while emphasizing the social conscience of a superstar athlete, and ending with a faithful recreation of a famous matchup. The third act, consisting of the match, is especially well-staged, combining real archival footage with that of the actors; it also uses the real commentary from Howard Cosell. Also like Ali, the film does a great job setting the stage for that final match. There’s even an outstanding subversion of the training montage trope, in which we see King actually training, while Riggs just stages endless stupid photo ops.

While his resentment of talented female players was likely real, the film makes clear that Riggs was, at heart, a pro wrestling heel, a guy relishing a villain role and playing to the crowd on those terms. Andy Kaufman would bring a similar act to actual pro wrestling, with his “intergender champion of the world” routine, a few years later.

Stone, fresh off an Oscar win, may not quite disappear into the role of King, but she’s very good, as her chemistry with Riseborough is just crackling. Stone and Carell—who played father and daughter in Crazy Stupid Love—are kept apart for most of the film, but do get some witty repartee with each other.

Victoria and Abdul tells the story of an obscure, only recently discovered episode in English history, one that’s handsomely mounted and generally well-acted, especially by Judi Dench. There are a couple of major flaws, though, that nearly sink the film.

Directed by Stephen Frears, the story of Victoria and Abdul is probably more interesting than the movie itself: Abdul Karim, a Muslim from India, was brought to England to serve as an attendant to Queen Victoria in the late 19th century, and ended up becoming a close friend and spiritual advisor to the queen in the final years of her life. This arrangement, highly disapproved by essentially everyone else in the royal house, was kept quiet until the publication of a book 50 years later.

In the film, Abdul (played by Ali Fazal) comes to London along with his much more politically outspoken friend (Adeel Akhtar), to participate in a ceremony for the queen who, prior to the subcontinent’s independence, held the title Empress of India. Abdul and the queen strike up a friendship and soon she’s relying on him for spiritual guidance and calling him “Munshi.”

Victoria and Abdul is not to be confused with the other movie in which Judi Dench played Queen Victoria and had a scandalous, not-quite-affair with a younger man—that was Mrs. Brown, from 1997. This film, like the other one, is handsomely photographed and presents a monarch looking back on a long life with some degree of sadness. Dench’s multilayered performance demonstrates this admirably. However, it doesn’t give us nearly as much of a sense of who Abdul was, or his inner life. His wife and mother-in-law show up, but neither gets much of any characterization at all, while a subplot involving venereal disease especially makes little sense.

The film also takes the somewhat untenable position that the British Empire was a force of evil in the world, one of racism and imperialism, but that the queen herself, who had been on the throne for some 60 years at that point, had nothing to do with any of that, and was actually some sort of secret liberal. Still, the film is full of an extended cast of respected British actors, like Michael Gambon, Simon Callow, Olivia Williams and, in his final role, Tim Pigott-Smith.

My other favorite bit in Victoria and Abdul? We’re introduced to the prince and heir to the throne, played by Eddie Izzard as a spoiled jackass angling to take over the throne the moment his mother the queen keels over. Yes, the Queen of England, in the 19th century, had a Large Adult Son.