Before Sunrise With Barack and Michelle

On Southside With You. 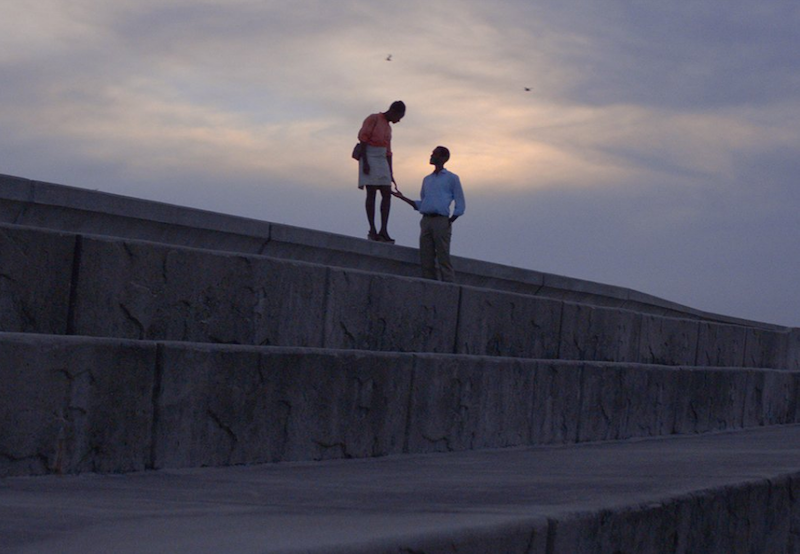 Writer/director Richard Tanne’s Southside With You is essentially Before Sunrise With Barack and Michelle: In just under 90 minutes, it’s the charming, cute, partially fictionalized dramatization of the current president and first lady’s first date.

The film, which bases some elements on published accounts from various biographies and fills in dialogue mostly based on conjuncture of what they might’ve said, is touching and smart, packing in not-so-subtle references to Obama’s political future, the way a superhero prequel might slip in Easter eggs about what’s to come. The performances, from a mostly unknown cast, are generally good, and most of what we see feels true. There’s just one scene, the film’s most ambitious, that misses the mark.

The action is set on one day in the summer of 1989. Barack Obama (Parker Sawyers) is a 28-year-old Harvard Law student and a summer associate at a law firm in Chicago. Michelle Robinson (Tika Sumpter) is a 25-year-old associate at the same firm and her future husband’s supervisor.

In a park, at an art museum, over drinks, and at a showing of that summer's lightning rod film Do the Right Thing—all shot on location on the South Side of Chicago—the two talk, about their parents, about what it was like to be a black professional at that particular point in time. Throughout, the two sound like a reasonable approximation of how the late-80s versions of Barack and Michelle might’ve talked and behaved.

As Obama, Parker Sawyers is convincing. He’s taller and darker-skinned than the real Obama, but he’s got the look and mannerisms down cold. The voice is off—more on that in a bit—but the intonations of speech are just right. As Michelle, Sumpter is less of a dead ringer looks-wise, but the voice is just perfect.

But there’s one scene that’s clearly meant to be the movie’s centerpiece but doesn’t measure up. Barack takes Michelle to a community meeting, held in a church on the South Side, where Obama had done a lot of work as an organizer a couple of years earlier. Times are tough, and the community is having trouble summoning the political will to get a needed center built.

From the start of this scene, it’s pretty obvious what direction it’s going: Obama is going to stand up, deliver a rousing speech, and use his considerable oratorical skill to move everyone in the room, all the while impressing his future wife. The idea of this scene—which is fictitious, from what I’ve read—is a great one. But the execution is just off, because we don’t hear brilliant oratory from Sawyers-as-Obama. The actor is great at imitating Obama’s speech patterns in one-on-one scenes, but in this particular instance? We’re told we’re watching a great speech, but we don’t actually see one.

The point that’s made over and over by the film is one big metaphor for the man's presidency: That Obama’s political skills are marked by his personal charm, pragmatism and ability to be different things to different people, but those skills aren’t perfect and don’t work every time. This is especially driven across in a confrontation with an older partner in the firm outside the movie theater.

Obama’s 1995 memoir, Dreams From My Father, remains a uniquely intriguing examination of the president, his upbringing, and his long struggle to come to terms with his unique racial identity. Southside With You, along with its effective romantic comedy elements, functions as something of a companion piece to Dreams.

We’re going to see a lot of movie portrayals of the 44th president in the coming years; perhaps Sawyers will end up playing Obama at various stages of his life, a la Michael Sheen and Tony Blair. If he does, I hope his next attempt of delivering a rousing Obama speech goes better than the one here.