Saving the World, Saving Us

What would I do without Steven Universe? 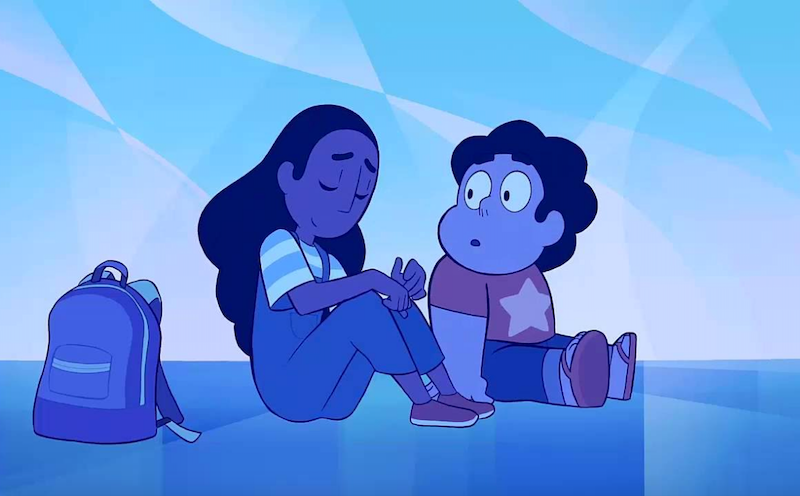 With the possible exception of Sailor Moon’s transformation sequences, I don’t think there’s a cartoon that can make me cry as consistently as Steven Universe. This show about a bunch of magic lesbian space rocks and their pet human is devastating in all the best ways, and last night’s episode was the most effective yet, featuring a song about intrusive thoughts, anxiety, and finding inner peace when your brain’s too fucked up to function.

Crash course: Steven Universe is about a kid named Steven who has a pink crystal in his belly button. That’s a trait he has in common with his best friends and guardians, the Crystal Gems, alien shapeshifters whose essences are stored in various kinds of precious stones. Steven and the Gems (along with Steven’s dad Greg, his best friend Connie, and other residents of Beach City) band together to fight evil Gems from “Homeworld,” which has begun hostilities again after losing a war on Earth thousands of years ago.

Also, all of the Gems are queer girls, Steven and Connie are able to fuse into a genderqueer, possibly intersex person known as Stevonnie, and there are frequent musical interludes which also advance the plot. Being a queer girl of the genderweird persuasion myself, you can imagine that Steven Universe gives me a lot of feelings simply by being a thing that exists, something I couldn’t have imagined in high school or even a few years ago. The first episode featuring Stevonnie set off a cacophony of sadness and joy simultaneously in my head; Garnet’s song about the empowerment she feels from being in love (while punching an asshole named Jasper in the head) never fails to perk me up—and even though I’m far from caught up on the series as a whole, I couldn’t resist watching the most recent musical number from last night, which sent me into a cascade of empathetic tears.

“Here Comes a Thought” takes place as Garnet and Stevonnie are meditating together, presumably as part of some Gem training. Garnet intones the title over a black screen, and then begins to sing as the scene commences: “Take a moment to think of just/Flexibility, love, and trust.” She’s seated in lotus position with Stevonnie in a dreamy blue landscape, and at first, it seems as though this will just be an audiovisual representation of how intrusive thoughts can make deep meditative states difficult to achieve.

But then we pan over to Garnet’s two halves, Ruby and Sapphire. Ruby is bopped on the nose by an iridescent butterfly and races after it, yelling so intensely that she begins to cry. Meanwhile, Sapphire is wrapped up in a cloud of similar butterflies, unable to see a way out. “You’re losing sight/You’re losing touch,” sings Garnet. “All these little things seem to matter so much/That they confuse you/That I might lose you.” Ruby realizes she’s crying and her anger turns inward; Sapphire, unable to see her beloved Ruby, collapses under the spiral of butterflies.

These words aren’t just about meditation; they’re about anxiety and intrusive, depressive thoughts. They’re the words I hear when I remember all the stares and casual misgendering I accumulate in my wake, the voice in my head saying that my friends hate me for innocuous statements and unknown slights. Stevonnie echoes Garnet’s words as Connie goes through something similar, remembering “something I did/That failed to be charming/Things that I said/Are suddenly swarming,” as butterflies again burst forth from Connie’s backpack. All these things do matter so much, Stevonnie sings, “that they confuse me/That I might lose me.” It’s even more impactful when turned inward; “losing” to anxiety implies a loss of self that’s terrifyingly feasible behind every corner.

If you don’t live with anxiety or a similar mental affliction, I’m not sure I can express how important this is to see in a massively popular cartoon for young people. Growing up, I couldn’t stop thinking about how other people thought of me when I wasn’t around, and developed intense feelings of inadequacy that I blamed on puberty and had no idea how to deal with in a healthy way. It means the world to me to know that young people watching Steven Universe might see themselves in this song, the same way some of them surely see themselves in the show’s queerness, and know that they’re going to be okay, that there are ways to chase away the fear and bitterness that sneak up on us and pounce. But honestly, I’m mostly glad that this show found me as a big kid, because I don’t know if Steven Universe will ever stop finding new ways to help me be okay with myself.