The new Mary Poppins film is better than it ought to be. 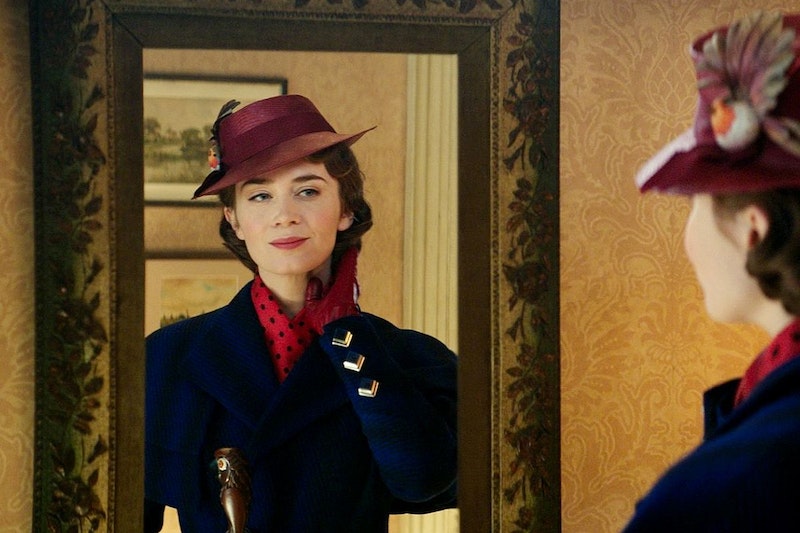 I wanted to take my children to see Mary Poppins Returns, but they’re 3000 miles away, and as they’re now in their 20s it probably wouldn’t be their thing. Still, it’s the thought that counts.

I’d like to report that the film is wretched, but actually it’s quite good, and I didn’t have more than two or three Harry Cohn fanny-squirm moments. It has a tight plot, which the original Mary Poppins didn’t. The new one is set in Depression-era London, and the Banks family is about to lose their wonderful terrace house at 17 Cherry Tree Lane. If that’s not an attention-riveting setup for Kids of All Ages (old Howard Johnson’s expression) I don’t know what is.

Emotional? You betcha; my eyes welled up a lot more than my fanny squirmed. Without giving away too much, I’ll tell you Colin Firth is the melodramatic bad guy, a crooked banker who holds the mortgage. And the good guy, the deus ex machina who pops up in the third act to save the family’s bacon, is our very own Dick Van Dyke: 93 years old but not at all enfeebled. He does a nice soft-shoe on top of a desk.

Dick isn’t onscreen for more than five minutes, but his little song-and-dance cameo redeems the film’s multitude of sins, which are legion but maybe unavoidable. You’re not going to leave the movie house humming the tunes, because the songs (by Marc Shaiman and Scott Wittman) are formulaic. The magic to the original Mary Poppins songs, by Richard and Robert Sherman, is that they’re boldly idiotic, and the songwriters knew how to write a good “hook” that repeats and repeats and repeats. (“Just a spoonful of sugar helps the medicine go down/The medicine go dow-owwn/Medicine go down…”)

Lin-Manuel Miranda, best known for Hamilton and Curb Your Enthusiasm, is a sort-of substitute for Dick Van Dyke’s chimney-sweep. He’s supposed to be a singing lamplighter. Apparently 1934 London still had Robert Louis Stevenson-style gaslights on its pavements. Lin is a decent song-and-dance man, but so is Jason “Costanza” Alexander, and Costanza is likewise not a guy I want to see substituting for Dick Van Dyke in anything more substantial than an SNL skit. Dick as male lead was a smooth, elegant racing yacht; the new guy is a tugboat, working hard but showing effort in every move and lyric.

And there’s something preternaturally foul and scruffy about Lin Miranda. Even when covered with soot, Dick never looked as dirty as Lin. There’s a perfunctory reprise of the chimney-sweeper dance, Lin with his multiracial fellow-lamplighters speaking rhyming-slang, and it’s pure fanny-squirm. Lin’s cockney accent is better than his predecessor’s, but that’s not really a plus. Dick’s awful locutions (“Allao Maary Pappins”) were part of the 1964 movie’s inadvertent comedy, a source of eternal delight to English folk.

As to the new Mary Poppins herself, Emily Blunt: well, she’s serviceable, and probably dances better than Julie Andrews ever did. But she lacks Julie’s charisma, even though she does imitate Julie’s chopping-board diction pretty well. And there’s a meanness about this new Ms. Poppins that suggests a sub-headmistress at St. Trinian’s more than a loving nanny.

The Banks household, on the other hand, is much nicer this time around. This is partly because there are three kids, as in Peter Pan, and the mother is recently deceased. So you get pathos, and a mischievous little brother who moves the story along. The setting is about 25 years after the previous movie, and instead of two regular parents we have the original kids, now grown up. This brother-and-sister arrangement is very congenial; it removes the taint of Albee-esque sexual tension that marred the original, in which it was plain that while the parents (neurotic feminist Glynis Johns and pie-faced martinet David Tomlinson) must’ve made love on at least two occasions, they didn’t really like each other very much. Or their children.

The actor playing the father, Michael, does a fine job of playing a wimpy dad, a bank teller struggling to hold onto his job. However I kept thinking, “But he’s gay!” This has nothing to do with the actor himself, Ben Whishaw. The last time I saw him was his excellent performance as Jeremy Thorpe’s (Hugh Grant) campy boy-toy in A Very English Scandal.

I made a point of seeing Mary Poppins Returns the day it opened partly to feel sorry for myself and to make up for one of my childhood’s outstanding omissions. I think I was the only child in the world who didn’t see Mary Poppins when it first opened around Christmas 1964. I did see it next time it came around, at Radio City Music Hall. In those days the Disney organization made you wait seven or eight years if you missed something the first time. I was probably stoned, since that’s how you watched movies in the 1970s if you were 17 or 18.

Not to say I didn’t know the full score of the movie long before. If you were a kid in the mid-60s you could pick up 90 percent of Mary Poppins or the latest James Bond flick by osmosis, at it were, just by listening to your friends, the ones who got to see films when they came out. I was in boarding school, and since one parent was in an insane asylum and the other one was never around, I was very dependent on the chitchat of schoolmates. I lied and talked knowledgeably about Goldfinger for years without anyone ever knowing the difference.

But the point I want to make about the original Mary Poppins is that it seemed to permeate kiddy pop-culture more thoroughly and permanently than any other film before or since. Twenty years ago I was astonished to find that every toddler I met knew the thing and could sing the songs. From videotapes, probably—but still.

Even the nuns at that boarding school in ’64 knew all the songs almost as soon as the film was released. They had the score, they had the fake-books, they coached us in glee club and chorale singing of “Chim-Chim-Cheree” and "Supercalifragilisticexpialidocious." Which now strikes me as weird, since Mary Poppins is not only devoid of nuns and nunneries—unlike, say, The Sound of Music—it’s a musical lacking any devotional tinge at all. The closest you get is a bag lady (Jane Darwell, The Grapes of Wrath’s Ma Joad) who squats on the steps of St. Paul’s Cathedral and cadges change from strangers on the pretext of selling them bags of crumbs to “Feed the Birds.”