The first in a series by Splice writers on the best and worst movies of the year. 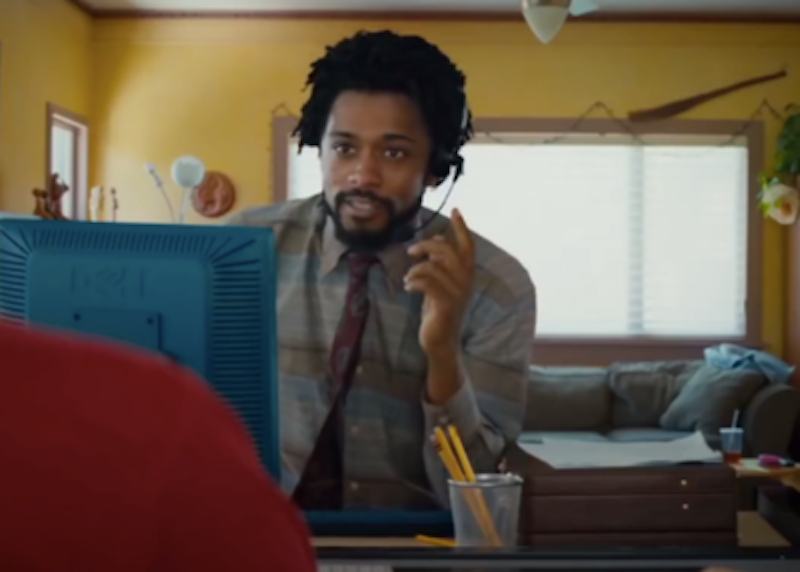 I say it every year, but it's no less true now: 2018 was a much better movie year than everyone says. For all the talk about the weird structural things going on in the movie business, the uncertainness about the future of the distribution model, and the industry's over-reliance on blockbusters, there's always a good-to-great movie playing, somewhere, at all times.

1. Sorry to Bother You. The debut film by 47-year-old rapper Boots Riley is audacious in so many ways large and small, before taking a huge leap in its third act and daring its audience to come along. Visually arresting, politically incendiary, and frequently hilarious, Sorry to Bother You captured the zeitgeist of 2018 like no other film this year.

2. If Beale Street Could Talk. Barry Jenkins followed up his Oscar-winning Moonlight with a film that's even better, adapting James Baldwin's novel of romantic hope and infuriating tragedy. The film's outstanding performances go about a dozen deep, but what's most striking is how beautiful this film looks, as Jenkins and his cinematographer, James Paxton, do amazing things with lighting.

3. A Star is Born. An old-fashioned Hollywood entertainment, with great performances from Bradley Cooper, Lady Gaga, and Sam Elliott, and an assured direction from Cooper in his debut film.

4. Roma. Alfonso Cuaron's semi-autobiographical story of his upbringing in Mexico is another that requires a leap of faith for audiences. It's long, in black and white, not in English, lacks movie stars, and it won't exactly be in its natural place on phones and tablets when it debuts on Netflix next week. But Roma is a visual marvel, featuring several of the year's most memorable shots and scenes. And that's thanks to Cuaron, who wrote, directed, edited, and shot the film.

5. Annihilation. All but dumped in February by a studio that didn't believe in it, Alex Garland's follow-up to Ex Machina is the most thought-provoking sci-fi film in a long time. Featuring a top-flight, mostly female cast that includes Natalie Portman, Gina Rodriguez, Jennifer Jason Leigh, Tessa Thompson, and Oscar Isaac, and combines ideas about identity and humanity with some truly striking images.

6. Can You Ever Forgive Me? Featuring career-best work from both Melissa McCarthy and Richard E. Grant, Marielle Heller's chronicle of the Lee Israel literary hoax wonderfully recreates 1980s Manhattan, especially the bookstores and bars of a bygone era. Bitingly funny, it’s the best film about literary fraud since World’s Greatest Dad.

7. Bisbee '17. Robert Greene's documentary about the centennial of the 1917 Bisbee Deportation is like an American The Act of Killing. Through re-enactments and interviews, the town today reflects on the events of a century ago, when 1300 striking mine workers were deported and left for dead. As you might expect in 2018, opinion is divided on whether the deportation was right. In an outstanding year for documentaries—there were at least 15 I would call great—this was the best.

8. First Reformed. Paul Schrader's best film in years stars Ethan Hawke as a pastor amid a personal and spiritual crisis, as his tiny and sparsely attended church marks its 250th anniversary. Probably the most heart-wrenching film of the year, First Reformed shows just what an accomplished actor Hawke has become in middle age.

9. The Hate U Give. George Tillman Jr.'s adaptation of the young adult novel tells a coming of age story against the backdrop of the Black Lives Matter movement, built around a superlative performance by Amandla Sternberg as a code-switching teenaged girl.

10. The Death of Stalin. Armando Iannucci, the man behind In the Loop and Veep, brings his satirical sensibility for the first time to real history, namely the Russian court of Josef Stalin immediately following his death. It's dark, even by Iannucci standards, but still hilarious.

1. Peppermint and Death Wish (tie). This year featured two different remakes of Death Wish, one official and one not, but both were witless defenses of unchecked vigilantism that tries to wed their sensibilities to MAGA politics, but couldn't even do that right. Peppermint, with Jennifer Garner, is the more nihilistic (and more overtly racist) of the two, but Death Wish stars a sleepwalking Bruce Willis and sported a lot more plot holes. Let's call it a tie.

3. Gotti. The worst Mafia movie of all time was shot in Cincinnati, directed by the guy who played E on Entourage, and had as its primary objective a need to pay endless homage to its murderous subject and the Gambino crime family in general. A model of incoherent storytelling—the mob is a very difficult subject to make boring, but they pulled it off—Gotti had no take on its protagonist other than total sycophancy.

4. Life of the Party. This year featured Melissa McCarthy's best movie ever (Can You Ever Forgive Me?), but also one of her worst, this dumbass high-concept comedy featuring McCarthy as a newly divorced middle-aged woman who joins her daughter at college. Almost entirely laugh-free, it's merely a 15-years-too-late knockoff of Old School.

5. The Darkest Minds. Amandla Sternberg was wonderful in The Hate U Give, but she also appeared this year in another, much worse young adult novel adaptation, one of the dregs of the post-apocalyptic YA genre. This one didn't have a single idea that wasn't already used in the X-Men or Hunger Games franchises, years ago.

6. The 15:17 to Paris. The idea of re-enacting the time in 2015 that three American servicemen foiled a terrorist attack on a train in France—with the three heroes playing themselves in the movie—probably sounded like a good idea when it was first proposed, especially with Clint Eastwood directing. The problem is none of the three are natural actors, and not a single interesting thing happens for the hour-plus before they get on the train.

7. China Salesman. Steven Seagal and Mike Tyson! In a movie together! And they fight! Except, neither of them has a lot to do with the main plot, the movie itself is essentially propaganda for the Chinese government, and the big fight scene is cut so aggressively that I'm not convinced Tyson and Seagal were ever actually in the same room.

9. Green Book. The sort of film I was hoping we were done with by now, the period racism movie in which the white guy is the hero and the primary stakes are that the white guy might learn to become less racist. It gets extra points for some of the most egregious stereotyping of Italian-Americans I've ever seen in a non-mob film. Of all of this year’s “Oscar films,” Green Book is the only one that’s truly bad.

10. Ready Player One. Steven Spielberg's adaptation of Ernest Cline's novel is the worst of the many films this year that combined lots of desperate intellectual property and used it for its own ends. It also hits a new nadir in Hollywood pandering to male nerds.