A look at four movies, one of which is much better than the other three. 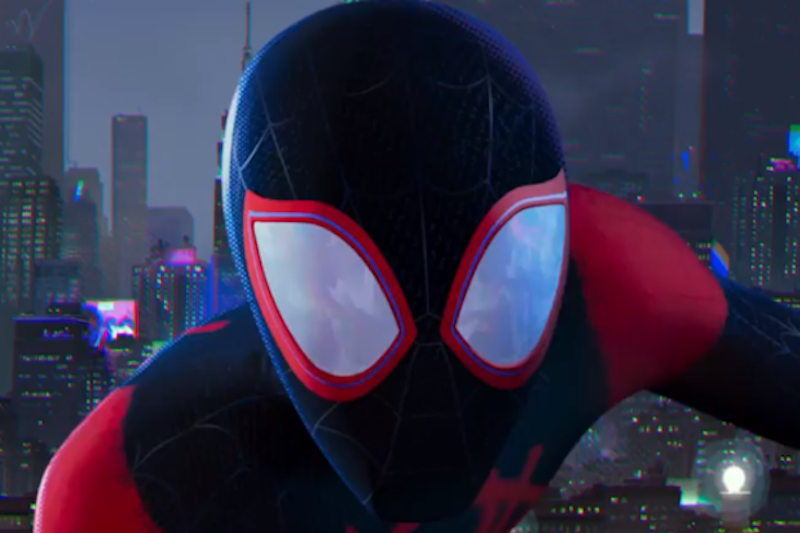 Spider-Man: Into the Spiderverse A-

When Disney and Sony reached an agreement a couple of years ago to allow Spidey into the Marvel Cinematic Universe, an apparent loophole allowed Sony to produce animated Spider-Man movies. Now they've exploited that, and produced the best animated movie of 2018.

By focusing on the black, teenaged, Miles Morales version of Spider-Man, introducing him to a half-dozen other Spider-Men (and women, and a pig) from other dimensions, and combining that with creative animation, directors Bob Persichetti, Peter Ramsey, Rodney Rothman have created the best Spidey film since Sam Raimi's 2004 Spider-Man 2.

The film is co-produced by The LEGO Movie auteurs Phil Lord and Chris Miller, with Lord getting a story credit, and there's so much to love here. The visual style. The depiction of New York City, where it's the present day, but at the same time (thanks to graffitied subway cars), it sort of feels like 1992. Excellent voiceovers by Brian Tyree Henry and Mahershala Ali as Miles' father and uncle, respectively. The characterization of an older version of the Peter Parker Spider-Man, voiced by Jake Johnson, which is surprisingly poignant. Even the Stan Lee cameo, usually an afterthought, is especially heartbreaking, following Lee's recent death.

Does Spider-Man: Into the Spiderverse suffer at all, as nothing less than the fourth launch of a new Spider-Man series since 2002? Not really. It's so different, and so expansive, that I didn’t mind.

Danish filmmaker Lars von Trier returns with The House That Jack Built, his first film in five years. It's a movie that's so consistent with the themes of the director's previous work—violence, narcissism, long-windedness—that von Trier can't resist including clips of some of his own past movies at one point.

Set in the 1970s in an unnamed part of the U.S., the film stars Matt Dillon as Jack, a prolific serial killer. We see several of his murders, carried out with varying degrees of depravity. But the film also spends much of its time on voiceovers, including an "interview" device that isn't explained until the end, in which Jack pontificates about art, architecture, Hitler, and why he hates women. Throughout, he sounds like a pretentious middle-aged man who just discovered the work of Jordan Peterson. If Jack existed in the present day instead of the 70s, he'd never kill anyone, because he'd be too busy with his YouTube channel.

Some think this movie is hilarious, but I'm not seeing that, except for a stunt-casting joke at the end that made me smile. I mostly found the film a gross, unpleasant slog, despite a capable turn from Dillon, who doesn't get used nearly enough these days.

It's been a long time since Peter Jackson last made a good movie, and the dry spell continues with Mortal Engines, which answers a burning question: What if Mad Max: Fury Road had sucked? Written and produced by Jackson and his wife Fran Walsh, and directed by Jackson protégé Christian Rivers, Mortal Engines is based on everybody's favorite: a fantasy novel with four sequels.

It's the post-apocalyptic future, and in a not-so-subtle allegory of imperialism, the city of London is now predatory, ambulatory and extremely steampunk, as a dictator type (Hugo Weaving) moves it around the planet in order to gobble up other places and civilizations. At the center of the story is Hester (Icelandic actress/discount Kristen Stewart Hera Hilmar), a young woman out for revenge against the bad guys. She's assisted by (Robert Sheehan), a poor orphan who really wants to fly planes.

Mortal Engines is an obvious rehash of George Miller's great 2015 Mad Max: Fury Road, minus just about every one of that film's positive qualities. The action is choppy and boring, the characters are terrible, the effects are garish CGI instead of practical and none of the stakes are compelling. And then, after 90 minutes, the film suddenly stops ripping off Mad Max and pivots to Star Wars, complete with a Death Star-like weapon, a Luke-style assault on it, and a score that's a brazen knockoff of John Williams.

The world-building is so piss-poor that the nuclear holocaust that kicks off the film is hardly explained and quickly an afterthought. It's never especially clear which direction the characters are going and what their motivation is. And probably the worst choice is that the film treats one character's death with wistful music and a treacly montage, when everything we've learned is that the character was essentially an abusive stepfather.

Mary Queen of Scots pales in comparison to The Favourite, and even to the otherwise mostly forgettable Outlaw King. A typically winning performance in the title role by Saoirse Ronan can't save a tepid, boring historical drama.

Directed by Josie Rourke, a first-timer from the London theater scene, Mary was written by Beau Willimon, who with The Ides of March and House of Cards has cornered the market across multiple media on mediocre works about political intrigue. The film tells the story of Mary (Ronan) and her feud with cousin Queen Elizabeth I (Margot Robbie.) Complicating things are that the two never met in real life, so the movie invents a meeting scene that's really the only time the film comes alive.

I get the point the film’s trying to make—both women faced pressures and challenges that they in no way deserved, especially Elizabeth, who is portrayed by a miscast Robbie as a smallpox-addled grotesquerie. But the lackluster script just can’t find a way to make any of this interesting. Opening this film at the same as The Favourite, which attempts most of the same things but does all of them much better, was nearly an act of studio malpractice.