Film Review: Aquaman Gets So Much Right

Unlike in Zack Snyder's Superman films, there's actually sunlight. B+ 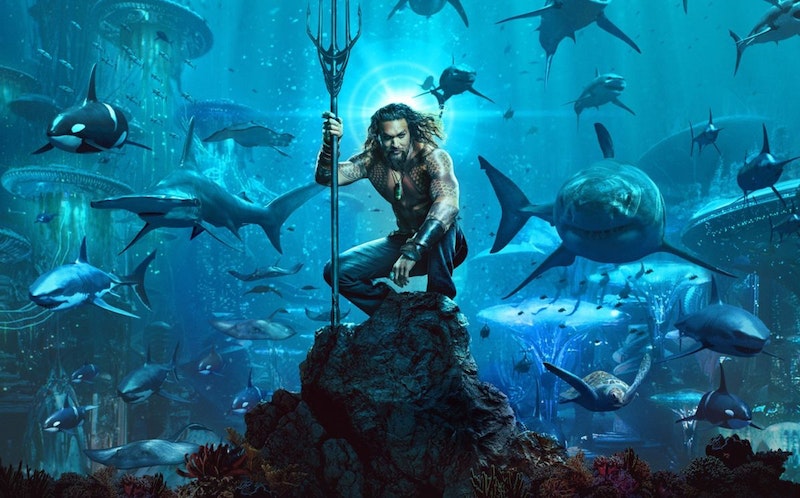 With Aquaman, the DC Extended Universe shows they may finally have their act together. After several years in which Warner Brothers' superhero franchise seemed incapable of cinematic magic when using any character other than Wonder Woman, they've struck gold again, with a visually stunning film about a character whose mythology was once considered un-filmable. There's a reason why there was never an Aquaman movie until now.

It's not easy to stage a superhero movie that's set largely underwater, but director James Wan has managed it. The world-building here is definitely the best of any non-Wonder Woman DCEU film, the action sequences are first-rate, and unlike in Zack Snyder's Superman films, there's actually sunlight.

The film is mostly an origin story for Aquaman (Jason Momoa), who appeared briefly in Justice League a year ago. The son of a human father (Temuera Morrison) and a mermaid-like sea creature mother (an impressively de-aged Nicole Kidman), Arthur Curry becomes a locally known superhero until he's pulled into a multi-faction civil war involving various underwater kingdoms. Don't expect to see cameos by the other DCEU super friends.

It's impressive how much Aquaman gets right. The action sequences are outstanding, and even the finale—almost always a disaster in DCEU movies—is well-staged. The screenplay, credited to David Leslie Johnson-McGoldrick and Will Beall, with story credit given to Beall, Wan, and DCEU head honcho Geoff Johns, is good at setting things up and paying them off down the line. Even the score, by Rupert Gregson-Williams, is one of the better ones of late.

In addition, the complicated politics and motivations of the different underwater factions are explained without too much confusion. As someone with not a scintilla of knowledge of the comic book source material, I was never lost or confused.

Momoa, a veteran of the early days of Game of Thrones, is charismatic, funny, and in command in the role, and he's also got fantastic chemistry with Amber Heard, an unconventional but successful choice to play the female lead, Mera. Patrick Wilson is a weak link as the main villain—he and Momoa are supposed to be half-brothers—although Yahya Abdul-Mateen II has a more compelling arc as a secondary villain, Black Manta.

Aquaman's also got the right director in James Wan, a versatile filmmaker who's a veteran of the Fast and the Furious universe, and it shows. One standout action sequence, in a seaside Italian village, is so well-blocked and goes in so many different directions that the Fast influence is apparent.

Minus the Afro-futurism, Aquaman's got a bit in common with the year's best superhero film, Marvel's Black Panther: There's a secret, underground, futuristic kingdom, with advanced technology, and the hero is called back there, where becoming king requires winning a physical fight.

While there's never been an official film with the character before, Aquaman was a pretend movie, 15 years ago, on HBO's Entourage, joining next year's Ernesto Ferrari biopic, as well as various films about Pablo Escobar, on the list of fictitious movies from Entourage that have since been produced in real life. Let's just say Momoa has more charisma and talent than the fictional Vinnie Chase ever did.

No one knows exactly what direction the DCEU is going next, especially with uncertainty over who's going to be playing Batman and Superman. Comic book movie competition remains fierce, with Marvel still chugging along, Fox doing good things with Deadpool, and even former also-ran Sony releasing both megahit Venom and one of the most inventive superhero films in memory with Spider-man: Into the Spiderverse. Aquaman shows that there may be hope going forward for DC's movie series after all.