On the ghosts and demons that invade What Lies Beneath (2000). 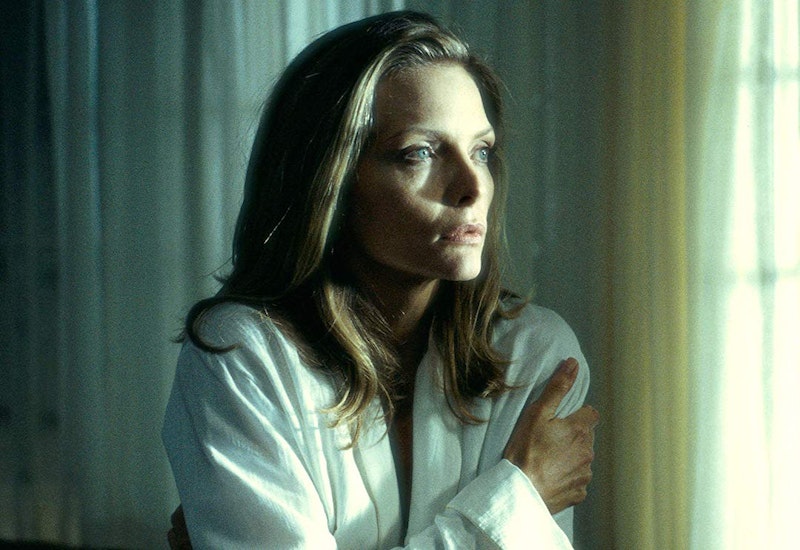 Ghosts that invade and haunt the old and creaky houses are a constant presence in literary and cinematic tropes. They can be horrific or comedic. They can also be done badly because it’s difficult to not slip into a clichéd artistic expression, creating a piece of work that’s not frightening or intentionally funny. But this isn’t the case with What Lies Beneath (2000), a film directed by Robert Zemeckis, with Harrison Ford and Michelle Pfeiffer in the main roles.

Zemeckis is mostly known as the director of Back to the Future trilogy. Most of his films have been action and adventure oriented with plenty of funny moments. In other words, Zemeckis’ directorial output can be described as distinctly blockbuster American, and he’s successful in that effort. Although What Lies Beneath was another popular film, stylistically, it was a departure for Zemeckis.

The story’s about a married couple, Norman and Claire Spencer (Ford and Pfeiffer), who seem to be living an idyllic life. Of course, there’s no such thing as perfection, and this is an indication that something will go horribly wrong. Zemeckis was very successful in development of the interior psychology of all the characters, particularly Norman and Claire.

Norman, a genetics researcher and a university professor, is a narcissistic man. Although he maintains the role of a supposedly good husband, he thrives on any attention, especially if it involves praise of his work in genetics. He suffers from a mild inferiority complex because his father, a mathematician, created a Spencer’s Theorem. This is especially obvious in the fact that, throughout the film, professionals in related fields keep confusing the father and the son, or they express their admiration for the father to the son. This mildly angers Norman and adds to his need to be recognized and worshipped.

Claire is fragile and as the film unravels do we find out why. She was in a car accident, which left her psychologically damaged, and now everyone treats her as if she were a rare porcelain figurine. This only adds to the submission and spell she is under created by Norman. He sees a weak woman when he looks at her, whom he protects but only insofar it feeds his own ego.

Strange and supernatural things begin to happen in their house by the lake. Doors open by themselves, radio and computers turn on out of the nowhere with letters “MEF” typed repeatedly, bathroom mirror steams up with messages like “you know,” images of a woman who looks almost identical to Claire appear in bathtub water. A married couple next door is either fighting or having passionate sex, and Claire is convinced that the man is an abuser who has possibly murdered his wife. She relays all these concerns to Norman but he dismisses it as mere rantings of a crazy woman.

The ghost of a young woman is unrelenting and slowly it becomes clear that the woman in question is Norman’s student with whom he had an affair a year before bizarre phenomena started in the house. It turns out that Claire knew about it but thanks to the car accident she experienced, a temporary amnesia prevented her from recognizing all the facts. This worked in Norman’s favor, and he nearly got away with it.

Zemeckis creates moments of fright that are both supernatural and psychological. The images are clearly inspired by Hitchcock’s sense of suspense but he doesn’t fall into the trap of replicating Hitchcock’s famous cinematic punctuations. In many ways, it honors the great master of suspense but adds other components that are either present (ghost of a young woman) or only suggested.

Hitchcock’s works are one of the obvious references that Zemeckis was going for, however, there are more subtle suggestions of other films. Claire’s disorientation that’s caused by Norman’s egotistical manipulations and the need to cover up his affair, are similar to the action in George Cukor’s Gaslight (1944). Charles Boyer plays a husband who manipulates his wife (Ingrid Bergman) into thinking that she’s going insane. Boyer’s character, just like Ford’s, is an oppressive force of a man, obsessed with covering up his own bad deeds.

What’s most fascinating about this psychological thriller is that underneath it all, it’s a feminist film, or a film that exacts revenge on philandering men. Eventually, Claire gains strength to confront Norman but that’s not the only indication of the exploration of masculine and feminine. Claire’s friend talks about how great it is to get rid of a husband and gain a brand new car, because “alimony is a beautiful thing”; Norman’s friend mentions a professor who got caught having an affair with a student and how “you can’t get away with it anymore”; Claire gave up on her career as a brilliant and successful cellist in order to marry Norman and support him in his career; and of course, the ghost of Madison Frank, the woman who had an affair with Norman, that is the force behind Claire’s final strength to gain control over Norman.