Bong Joon Ho’s Parasite is the most accessible late capitalist class warfare movie yet. A- 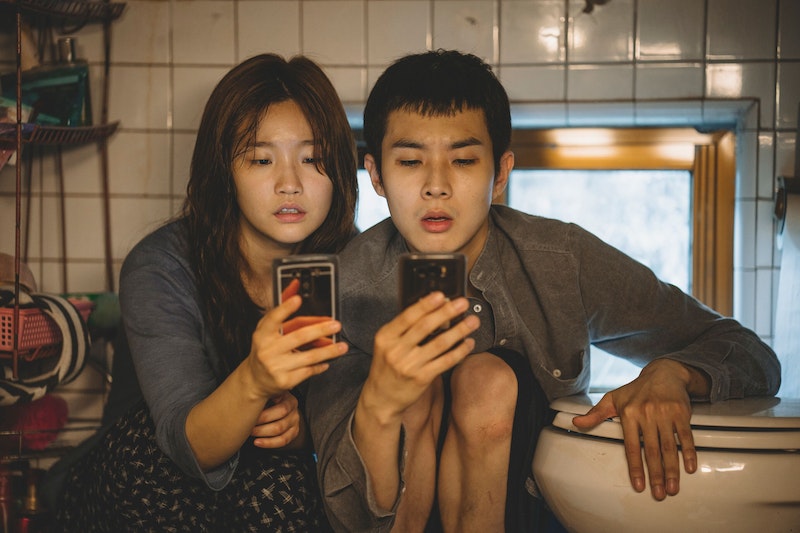 “It’s so metaphorical.” Tricking rich people is easy, especially when their children are involved. Bong Joon Ho’s Parasite, more than anything else, shows how meaningless and corrupt higher education is. Diplomas mean nothing but signify everything to the rich, who look at alma maters and listen to recommendations before making any hiring decisions for themselves. Parasite won the Palme d’Or because it’s Bong’s turn (he’s the first South Korean director to win the Palme d’Or), and for its message, all but illuminated in bright neon lights—“EAT THE RICH.” Bong’s film mines the same veins as Joker, but unlike Todd Phillips, Bong’s politically aware and knows what he’s doing. Arguably, that’s less impressive than blaming the “far left” for comedy’s decline after accidentally making a potent class warfare movie.

In Seoul, wealth stratification is severe: the Kims live in a basement apartment, all precarity workers who depend on unprotected WiFi to get onto WhatsApp so they can make ends meet for another day. They’re all smart and clever in their own ways, with a complete skillset to service the rich: a driver (Song Kang-ho), a housekeeper (Jang Hye-jin), and two tutors (Choi Woo-shik and Park So-dam). The Parks live a parallel life, walled off from the overflowing slums of Seoul and enjoying life in an opulent apartment on top of a hill. Mr. Park (Lee Sun-kyun) is in tech, and absurdly wealthy. There are echoes of Kurosawa’s underrated class noir High and Low, but in Bong’s Parasite, we see and hear from below, and no one is arrested and no families are torn apart by bureaucracy, as in Kore-eda’s thematically similar Shoplifters

Mrs. Park (Cho Yeo-jeung) is a busybody housewife with nothing to do and everything to worry about, and the Kims play her like a fiddle. Ki-woo (Choi) is first on the swindle, following a recommendation from a connected friend who services the rich. Ki-woo (or “Mr. Kevin” as Mrs. Park impulsively dubs him, like a pet) gets a job as an English tutor for the Parks’ teenage daughter, but it’s Ki-woo’s sister Ki-jung (Park) who really ups the ante, conning a clueless mother into paying extra for “art therapy sessions” for her “severely troubled son,” Da-song (Jung Hyun-joon). Ki-woo plants the seeds (saying that while Da-song’s “artistic sensibility is Basquiat-esque,” he has dense concentrations of “schizophrenia zones” in his drawings. It’s all bullshit, but delivered with enough calm confidence and pseudo-academic vernacular, the purses always open up). The Kims manage to get the rest of the house staff fired, and only once they have the house to themselves do they discover the abject, subhuman conditions of the basement and who lives down there.

Parasite has already set record per-theater averages in America, and barring an upset, it’s a shoo-in to win the Oscar for Best Foreign Film. As noted, it’s Bong’s time: first South Korean film and director to win the Palme d’Or, coming only two years after the acclaimed but beleaguered Okja (produced and released by Netflix, the movie was booed at Cannes in 2017 and still hasn’t received a home video release), and Parasite is hitting at just the right moment. People who were scared of seeing Joker missed a mediocre movie that nonetheless nailed our country’s bipartisan anti-rich sentiment, and though they did reasonably well, Shoplifters and Lee Chang-dong’s modern masterpiece Burning just didn’t reach as many people as Parasite has and inevitably will. I think Lee’s film is better paced, more ambiguous, more lyrical, but more contained and experimental. Parasite is a crowd pleaser, which is really saying something for the matinee Roland Park blue hair audience that sat rapt last Saturday afternoon at The Charles in Baltimore (at one point, Mr. Park says, “People on the subway have a special smell,” and one woman behind me, missing the point entirely, chortled and said very loudly, “Isn’t that the truth.”).

It’s that contempt for and disgust at the poor that does Mr. Park in: without breaking down and explaining an ending and a setup that felt more complicated than it needed to be, Mr. Kim stabs Mr. Park to death because he couldn’t stand the smell of a dead homeless man. If you’ve seen the movie, you’ll know, and if you haven’t, why are you reading this review? Go see Bong Joon Ho’s Parasite this week and show American distributors that Korean cinema is in bloom. It’s a movie urgent as Burning and American Honey, but without their experimental languor, and without the grim realities of the ending of Shoplifters. The events in Parasite are exceptional but also completely plausible, a condemnation that no self-righteous monologue could ever convey.