The Irishman is a major achievement. A 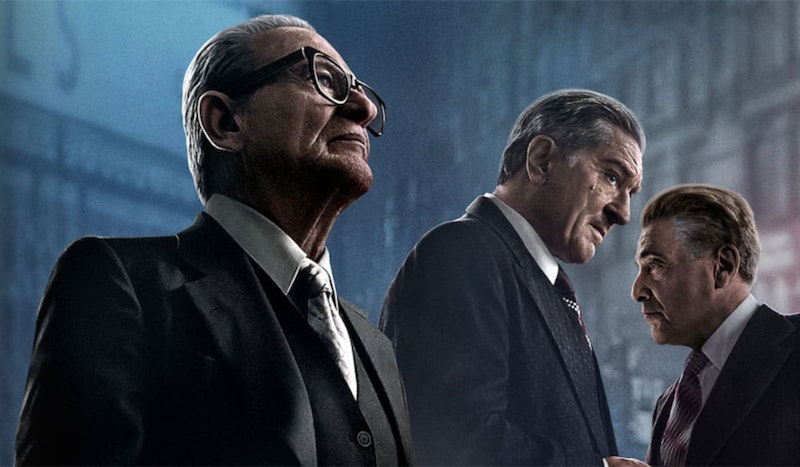 There have been endless debates about whether movies "glorify" the gangster lifestyle. This has been especially been directed at the crime cinema of Martin Scorsese, from Mean Streets, all the way through Goodfellas, Casino, and eventually The Departed and even The Wolf of Wall Street.

Most of the time this is true to a point. It looks at first like Henry Hill and Jordan Belfort are having a great time while living the criminal lifestyle. But the key is that the characters in those films tend to face their comeuppance at the end, whether through death, jail, or the promise of a lifetime of boredom.

Scorsese's latest, The Irishman, isn't going to lead to that sort of misunderstanding. The film, which reunites Robert De Niro with both Al Pacino and Joe Pesci, is as clear as any Scorsese crime film to date in arguing that organized crime is a dead-end life that will almost certainly lead to either a violent early death or a lonely late one. Not only does Scorsese spend the final movement of the film depicting his protagonist's sad final days, but he shows us throughout, with onscreen titles, exactly how each mobster died. Most of those demises weren’t pleasant.

The Irishman, which logs in at three hours and 30 minutes, is an adaptation of I Heard You Paint Houses, Charles Brandt's 2004 book in which Frank "The Irishman" Sheeran, a former Teamsters official and prolific hitman who claimed to have carried out dozens of mob murders, including the long-unsolved disappearance of legendary Teamsters boss Jimmy Hoffa. Sheeran is a Scorsese protagonist who, much like Henry Hill and Ace Rothstein before him, is the non-Italian, non-made guy outsider in the mob organization.

Covering a time that extends from the 1950s to Sheeran's death in 2003, the film covers decades of American political, labor, and mob history, in cities extending from Philadelphia to New York to Miami to Detroit, with a special focus on the intersections between the Teamsters and organized crime. The film is very funny at times, although it's more slowly paced than Goodfellas or Casino—possibly because the plot is completely free of cocaine—before taking a hard turn into full-on sadness.

(An important caveat: Frank Sheeran almost certainly lied through his teeth about everything in Brandt's book and there's a good chance he never killed anyone at all, so you probably shouldn't treat the events of The Irishman as pure truth.)

Scorsese's brought out the big guns: De Niro plays Sheeran, Pacino (somehow, in his first-ever Scorsese film) is Hoffa, and Pesci—retired from acting for most of the last 20 years—plays Northeast Pennsylvania mob boss Russell Bufalino. These men are all in their 70s and are in their fifth or sixth decade of professional acting. The actors are de-aged in the early scenes through an expensive, very impressive process that's always believable and leads to no uncanny valley problems. Plus, the casting leads to lots of fun scenes between actors with decades of cinema history between them. Pacino and De Niro, of course, were in both The Godfather Part II and Heat, while De Niro and Pesci headlined Goodfellas and Casino. Even Harvey Keitel, whose Scorsese history runs from Mean Streets to The Last Temptation of Christ, shows up for a couple of scenes, as Philly mobster Angelo Bruno.

All of the actors are outstanding, with De Niro giving his best screen performance in many years. Pacino does a lot of yelling, but at least it's in a role that calls for doing so. And it's so great to see Pesci again—he's not playing the out-of-control hothead, but rather a Mafioso who merely orders murders calmly. In the non-legends division, the cast also includes Bobby Cannavale, Stephen Graham, Jesse Plemons and Ray Romano.

Those complaining that film has little use for female characters have a point. For example, Anna Paquin, as Sheeran's daughter, has what's nearly a non-speaking role. About two hours in, she says her first two or three words of the film, and then Sheeran immediately says, in a voiceover, "My daughter never spoke to me again, after that day."

The Irishman premiered last month at the New York Film Festival and is now moving throughout the festival circuit; I saw it this week at the Philadelphia Film Festival. The film will have a theatrical release at the start of November, before hitting Netflix on November 27. It’s Scorsese’s longest movie, if you exclude his musician documentaries. But the Netflix connection is more natural than you think. Scorsese fans have been watching his three-hour crime epics on cable for years, and Netflix viewers are used to sitting on the couch and watching crime sagas for hours at a time. If you're worried it's too long as a movie, pretend it's a TV series.