We Thrive in the Gutters and Play with the Taboos

Basking in the depravity and playful perversion of Pasolini. 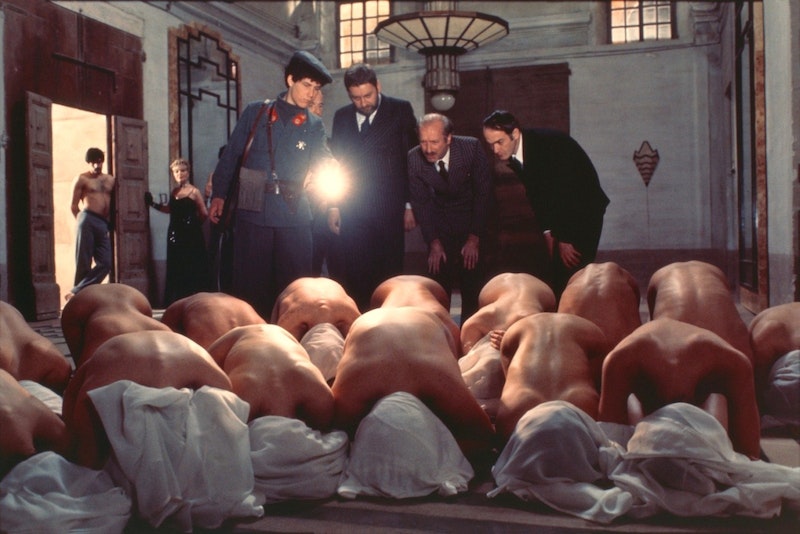 I discovered Pasolini a decade ago while assisting photographer Tina Schula with some of her personal projects in New York City. It was no-pay, but I was happy to help Tina, setting up strobes and reflectors in exchange for watching her create art with her Mamiya RZ67. Tina taught me how to load film in medium format cameras, use strobes, and how to get people to do your bidding in front of the camera. The hours were worth it, and at the end of the job, I got to keep her backup medium format —a Pentax 67—for a fraction of its eBay price.

Back then, a recent graduate, still young and eager to please, I tried to fit in. Tina, an immigrant from Vienna with a background in filmmaking and 10 years my senior ,  was my complete opposite and sensational in every sense. She didn’t care about societal norms, or regard them with anything but indifference or contempt. I’d never met anyone like her before. My peers in college —fellow starry-eyed engineering students —never heard of, let alone cared about Pasolini. Thanks to Tina, I met people I would never have otherwise. I never imagined I’d be at an apartment in Greenwich Village, helping her photograph an ex-Crimsonite turned NYU professor of Theology—or inside a pigsty on the other side of NYC, photographing an ex-Princetonian turned bookstore owner in Queens. It was their conversations with Tina that captivated me. They knew and talked about things that were alien to me.

Every day, I’d look at photographs made by Paul Graham or Anders Peterson. It was around then when I overheard a conversation between Tina and one of her friends, and subject of her photoshoot—the (likely) bed-bug harboring bookstore owner. They were talking about Teorema — one of Pasolini’s movies, and I knew what I was going to do that night as soon as I returned home to my tiny room near Prospect Park—my temporary, scorching abode that summer in 2011.

Salò’s most sensational aspects—including coprophagia, cannibalism, and incest—are still taboo, something Armie Hammer is learning the hard way. Around the time I first saw Salò, I saw Keira Knightly smacked in the bum in A Dangerous Method—this made my friend Ben chime in: “Some women like to get raped—they really want it, you know!”

Pasolini didn’t care! Which eventually got him killed, but who’d ever take death over freedom? I’m not questioning his courage or creative choices, but I want to underline a fundamental problem in our society—the assumption that erotica is in poor taste. If not, then why do most critics talk about his politics, his poetry, or his language, and conveniently sum up the erotica as a way for him “to cock-suck the world”?

If the “message” is his truly focus, Pasolini’s wasn’t unique. Take the parallel stories told in Pigsty — one of an enormously wealthy and dysfunctional family, the other of a cannibalizing pack of bandits feasting on anything that doesn’t kill them. Kill or be killed—if not by a predator, then by hunger or nature. That’s the nature of modern-day capitalism, and Pasolini portrayed that more successfully than any other director. These parallel stories are still (unfortunately) relevant.

But what made Pigsty more riveting for me than others wasn’t its “message.” It was watching a man chomping on a raw snake still writhing in his mouth. It was watching a severed human arm roasted and eaten. It was the sincerity with which the protagonist describes his feelings for the piglet in his dreams. That’s what sticks with you when you watch Pigsty, not any allegories for fascism or capitalism.

It’s the same with Salò. Take away the shit-fest, the butt-struct, the objectification of young boys and girls nude, parading in front of the worst kind of cretins, or the brutal murders, and what you’re left with is wealthy people taking advantage of those without power or privilege for nothing other than sheer amusement. It’s Marques de Sade’s vulgar erotica spun anew with material from both Fascist Italy in the 1940s and the failure of the counterculture of the late-1960s and early-1970s.

If you acknowledge humans aren’t one-dimensional creatures, then it isn’t difficult to accept that Pasolini, on one hand, was a master filmmaker, and someone with a flair for obscenity and erotica that reached beyond human genitalia, into a space outside of time or history. In an interview with Oswald Stack, Pasolini described his start in film:

“Unfortunately, I can’t remember the first film I saw because I was too young. But I can tell you about my first relationship with the cinema, as I remember it, when I was five years old —which was a bit weird, and certainly had an erotic-sexual facet to it. I remember that I was looking at a publicity folder for a film showing a tiger tearing a man to pieces. Obviously, the tiger was on top of the man, but for some unknown reason it seemed to me with my child’s imagination that the tiger had half-swallowed the man and the other half was still protruding out of its jaws. I terribly wanted to see the film; naturally, my parents wouldn’t take me, which I bitterly regret to this day. So this image of the tiger eating the man, which is a masochistic and perhaps cannibalistic image, is the first thing that remained impressed on me. Though obviously, I saw other movies at the time, I can’t remember them.”