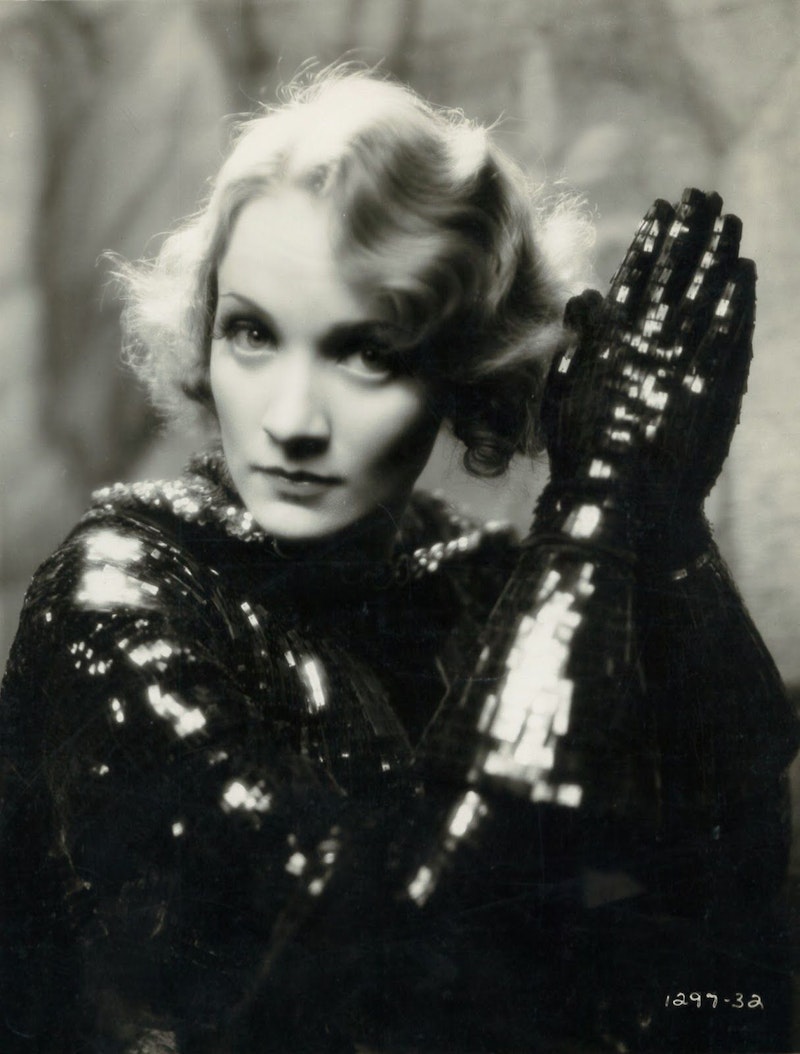 The third film collaboration between Marlene Dietrich and Josef von Sternberg, Dishonored (1931), continues on a similar path to The Blue Angel (1930) and Morocco (1930), namely a woman caught in various forms of love. Von Sternberg was clearly fascinated by Dietrich’s womanhood, as well as her acting ability to embody masculinity and femininity, and Dishonored is another example of a woman’s subtle power.

In Dishonored, Dietrich plays a widow (Marie Kollograd) of an Austrian soldier who found herself in a new profession—prostitution. Von Sternberg is a master of opening scenes, and here too the mystery and beauty of Dietrich’s entrance is captivating. She stands in front of a building, drenched in rain, adjusting her stocking. Her legs are the focus of our attention, as well as the tapping heels, an impatience already revealed.

Outside of the building, people have gathered as a body is carried out—another prostitute has committed suicide. Dietrich is untouched by this tragedy. The onlookers tell her that she’ll meet the same end, but she’ll have no such thing because she’s not afraid of death or life. This is overheard by a man, who turns out to be in the Austrian Secret Service and ends up recruiting Marie to become a spy, known as X-27.

At first, Marie is successful as a spy. She outs a traitor, who commits suicide before he’s captured. Her charms seem to be working. But as the plot progresses, Marie becomes emotionally involved with another turncoat officer, whom in her capacity as a spy, she’s meant to defeat. At first glance, this would appear to be a weakness but not once does Dietrich show this emotion. This is what makes Dishonored a fascinating look at feminine coldness, and Dietrich certainly projects this control. She’s surrounded by men at war (one would argue one of the most masculine pursuits and acts), but her womanhood is untouched by it.

The acting, particularly Dietrich’s, may seem mechanical at first, especially compared to The Blue Angel and Morocco, but this wasn’t unusual. As Imogen Sara Smith notes in her essay, “Mistress of Ceremonies,” Dietrich’s “acting was choregraphed to an inner metronome: von Sternberg instructed her, for instance, to count to six and then look up.” This is seen in Dietrich’s dialogue as well—she says a word, pauses almost unnaturally, and finishes her sentence. But we must ask, is there anything truly “natural” about von Sternberg’s cinematic vision? His style simultaneously embraces naturalism and abstraction, and this is why his films (particularly those he made with Dietrich) are akin to paintings.

Dietrich’s continuously frozen on screen, as if von Sternberg’s a captor and she’s a prisoner. Yet in this seemingly uneven relationship, they communicate with each other with a certain strangeness of eros only known to them. We’re not privy to this difficult union and its traces are tantalizing. This is the violent beauty of von Sternberg’s cinematic paintbrush—a play between reality and fantasy, a mask and a face. He makes use of a masquerade in the film, in which Dietrich is seducing the suspected traitor of the Austrian army. The foolishness of this game is juxtaposed with Dietrich’s indifferent stares. Her eyes and false eye lashes move as if she were a doll, yet in the moment of this artificiality, we sense a woman coming alive with her own will and power.

Dishonored deals with a dark subject but it’s also a funny film, albeit in a rather unsettling way. There are traces of silliness: the Chief of Austrian Secret Service member is perpetually annoyed, following every statement with “Hmph”; macabre dolls are hanging in Marie’s apartment, which are an occasion for laughter but also lend a trace of darkness that permeates the entire film.

Perhaps the pinnacle of this twisted and highly European humor comes in Dietrich’s disguise of a plumpy, zaftig Bavarian or Russian maid infiltrating the Russian military headquarters. Here, Dietrich doesn’t speak, only responds with a few grunts and sounds that reside somewhere between a mute imbecile and a cat. It’s in this odd moment that Dietrich wears no make-up. Her face is fatter, her hair is done up in braids, and there are no chiseled features that make her fully “Marlene Dietrich,” the erotic persona that she is. Paradoxically, it is with the removal of the elaborate make-up that Dietrich becomes someone other than herself. For her, the theatrical mask is the human face. This phenomenon alone appears to be at the center of Dietrich/von Sternberg relationship and it’s the existential understanding they have with one another.

Just like in Morocco, there’s a symbolic repetition of music. In Dishonored, Dietrich is a pianist and the sounds of “Waves of the Danube” (1880), composed by Iosif Ivanovici, are played mostly by Dietrich. She expresses her sadness, frustration, and anger in the music only. The flow of the waltz is in a fight with the mechanical and metronomic expression of Dietrich’s words. For von Sternberg, the music becomes a way to hypnotize the audience or by contrast, to wake them up. But here lie the many aesthetic and purposeful contradictions of von Sternberg’s vision—are we in an abstract or a realistic painting?

The feminine control remains in Maria’s/Dietrich’s hands. Unable to carry out the task of a spy to the end, she’s captured and sentenced to death by a firing squad. But even here, the men have no hold on her. She requests a piano to one last time, and her clothes she wore as the lady of the night. The suspense continues—will she truly be executed?—to the end. A soldier screams out that he can’t kill a woman but he’s quickly removed from the premises. Before she’s executed, Dietrich lifts her veil and applies lipstick in the last act of feminine coldness. The death, it seems, was her own choice after all.