Ilya Naishuller's new film, starring Bob Odenkirk, at first seems like a Death Wish or Liam Neeson ripoff, but it's a really impressive and enjoyable action movie. B+ 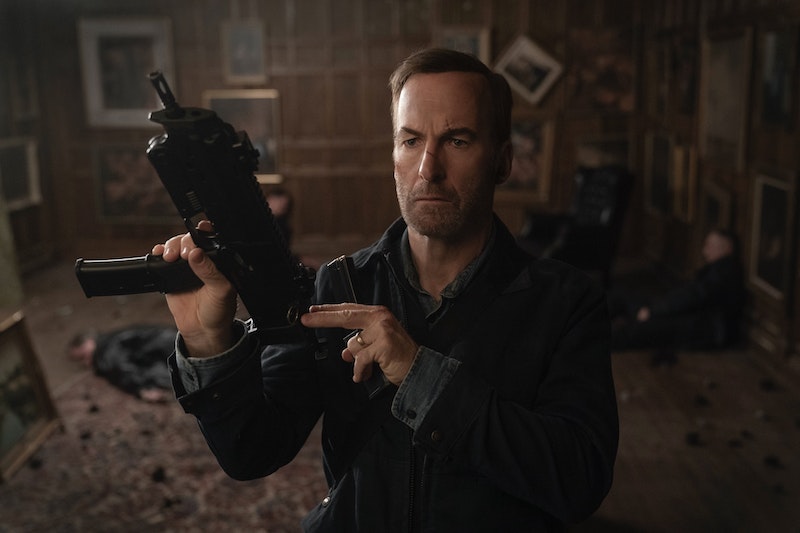 Nobody, directed by Ilya Naishuller, arrives in theaters on Friday, with a VOD release to follow in April. It comes across at first like yet another half-assed, unofficial remake of Death Wish. It also borrows more than a few elements from the Liam Neeson old-guy action canon, as well as Breaking Bad, the show in which its star played a supporting role.

It's another movie in which a guy in late-middle age successfully kicks the asses of groups of hardened criminals who are decades younger, and manages to reclaim his masculinity while doing so. But once the first act is over, Nobody suddenly gets better. Nobody stars Bob Odenkirk—in his first-ever starring studio movie role at age 58—as Hutch Mansell, who appears at first glance a meek family man. One night, criminals break into his home and he does nothing to fight back, causing Hutch's wife (Connie Nielsen) and kids to lose respect for him. But then it delivers a dynamite action sequence. And another, and another.

It starts when Odenkirk fights off a bunch of muggers on a public bus, in a much more effective homage to the Bernard Goetz incident than the one in Joker two years ago. This kicks off the main plot, as one of those criminals was the brother of an exceptionally crazy Russian mobster (an uproarious Aleksei Serebryakov, from the acclaimed 2014 Russian film Leviathan, which I likened at the time to “A Siberian A Serious Man.”)

The film has some of the best fight scenes in memory, expertly blocked and always clearly shot. There’s creative hand-to-hand combat in the fight scenes; David Leitch, the director of John Wick and Atomic Blonde, is listed as a producer. And the screenwriter is Derek Kolstad, who also wrote all three John Wick movies.

Naishuller, also Russian, is the director, best known previously for Hardcore Henry, that strange, much-maligned 2015 action movie that was filmed nearly entirely with GoPro cameras. The presentation here is much cleaner and more visually pleasing. Odenkirk, whose original background was in comedy, is a natural for this sort of role, mostly playing the straight man while doing a lot of incongruous violence. The film knows its premise is somewhat ridiculous, and uses that to its advantage. And beyond that, the film is consistently hilarious, using non-traditional music cues like Sammy Davis, Jr.'s "I Gotta Be Me," and "The Impossible Dream," with the "Man of La Mancha" song even sung by the Russian mobster bad guy.

There are obvious similarities to Breaking Bad, a show on which Odenkirk co-starred, and which spawned the spinoff Better Call Saul, in which he plays the lead. There’s an elderly man who figures prominently in the violence. Instead of the old guy with the bell, it's the 82-year-old Christopher Lloyd, as Odenkirk's dad, whose quiet supporting performance leads up to a glorious payoff.