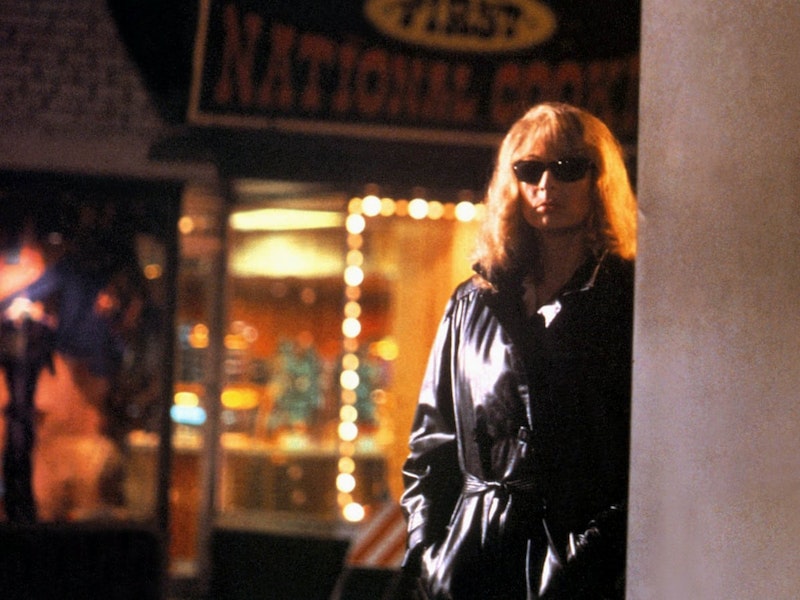 Brian De Palma’s 1980 thriller Dressed to Kill is notoriously anti-trans. It’s also not a good movie. Still, it was released as film number 770 in the prestigious Criterion Collection, and included in the Criterion Channel’s “Frame of Mind” collection of films about psychiatry. You can understand what Criterion was thinking. The movie has fascinating moments. Whether that makes up for the laziness at the core of the plot, and its unthinking transphobia, is up to the individual viewer.

I say “laziness” because the psychology De Palma presents for his killer comes off as a filmmaker substituting his own neuroses and fears for research and lived experience. Sometimes that works. Here it emphasizes how much of a mess the movie is—a collection of sequences, some of them effective in themselves, that never cohere into a larger whole. The lack of a credible psychology for the killer is a symptom of the film’s major problem: despite having a keen visual sense and a few thematic motifs, De Palma has no control over his material.

A call girl, Liz Blake (Nancy Allen), witnesses the killing and so becomes the next target for the killer. Miller’s teen son Peter (Keith Gordon), a scientific prodigy, joins Blake in a quest to bring the killer to justice. The killer turns out to be Miller’s therapist, Robert Elliott (Michael Caine) who is trans and apparently also has multiple personality disorder—we’re told at the end that a persona named Bobbi kills women who sexually arouse Elliott.

Structurally even this synopsis shows the resemblance to Psycho: a woman who seems to be our protagonist is murdered at the end of the first act, there’s a mentally-disturbed killer with a blurred gender identity, there’s a wrap-up at the end in which the killer’s psychosis is analyzed. There are various other echoes (Dressed to Kill opens with a shower scene, and closes with one as well), but none of them amount to much. There’s no emotional or artistic point to the movie’s obsession with Psycho beyond saying “Hey, Psycho was a pretty good movie, wasn’t it?”

Dressed to Kill breaks down into a series of set pieces with only a casual connection to each other and a lack of suspense that comes from a poor development of the thriller plot. Nominally a mystery, there’s a complete lack of red herrings. It’s not a spoiler to reveal that Elliott’s the killer—there aren’t any other possible suspects. Yet the movie can’t be accused of moving straightforwardly to its climax, as Blake’s search for the killer and her relationship with Peter move in fits and starts through awkward subtext. The capture of Elliott’s an anticlimax, and then is followed by a pointless dream sequence.

You could call the whole movie dreamlike—plausibility and logical cause-and-effect take a beating. There’s arguably a sense of latent emotional power. But that power remains latent since it isn’t developed coherently; inventive and visually striking scenes don’t build on each other to develop any theme from the start of the movie through to the end. Most notable of these sequences is a nine-minute wordless sequence in which Kate Miller wanders through a museum and engages in a cat-and-mouse seduction with a strange man. What could’ve been a straightforward narrative beat (Kate meets stranger, sleeps with him) is strung out into a cinematic scene with its own mood and internal structure, developing Kate’s emotional landscape and building her up as a character, as well as emphasizing the movie’s preoccupation with sexuality.

De Palma’s often viewed as a cerebral filmmaker who consciously deploys lurid elements, pulling audiences into a story with sex and violence while keeping them outside it by subverting expectations. That fits with the glossy, romance-movie museum sequence, and with the way Kate’s both the central character of the first part of the film and also given only a couple of scenes with a significant amount of dialogue, a character with no development. You could, I suppose, argue that by making her the focus of narrative identification the male director and presumed-male audience that gazes at and through her are undermining fixed gender, adopting her persona as a transgression against default maleness.

If so, that ends when she’s killed, as though the film was punishing its viewers for taking on the female point-of-view. The complexity of gender’s too much for the movie to handle, and it falls back on archetypes of transgression and punishment. The director’s not in control of his themes but is controlled by them, producing a half-digested Hitchcock pastiche that lives in set-pieces and archetype.

So sex is central to the film, not a healthy adult sexuality but a weird horrific landscape of obsession and consciousness of sin. Elliott kills out of a sense of guilt at being aroused by a woman. Kate begins the movie fantasizing about sex outside her marriage, makes that fantasy real, and is murdered for it after finding out that her lover’s tested positive for herpes. Sex is followed by punishment. Liz is chased by a killer because she witnessed a murder after an assignation with a client: sex leads to seeing a forbidden thing, leads to the violation of taboo.

Peter, the teen genius, reflects at the end of the movie that instead of building computers he could build a woman. There’s a sense, maybe, that this is what De Palma was doing with his story, trying to build a character and build a killer. But he failed, for the same reason Peter would: organic complexity exceeds and undermines mechanical logic. De Palma’s slickness and craft collapses faced with the emotional content of his narrative. The resulting film is sporadically fascinating, and occasionally unpleasant in ways De Palma probably didn’t intend.