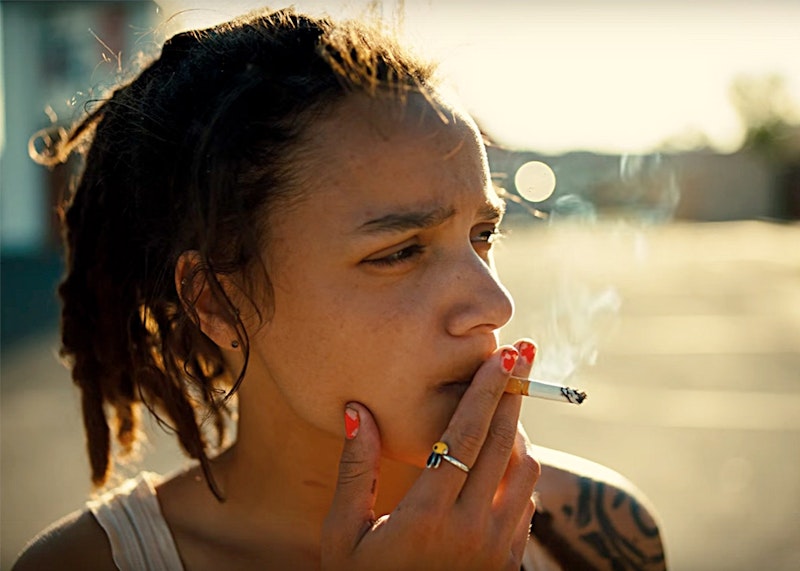 In the fall of 1996, I fell in love with a foreign-exchange student from El Salvador. It wasn’t meant to be, we’re still friends, and she strongly resembles actress Sasha Lane, which complicated the experience of watching American Honey, a feature film so naked and naturalistic that it feels like an apocalyptic documentary. For two and a half hours, Honey trails Star, a rootless teenager portrayed by Lane, through a recognizable America. The verisimilitude that captures writer/director Andrea Arnold’s attention should be familiar to all: the towns on life support, the anonymous strip malls, the dead stares, insects and mammals everywhere, wriggling and full of life.

Tough and pragmatic, Star drifts; we tag along. A babysitting gig falls apart, so she bails, falling in with a van of dispossessed youth who are crisscrossing America, peddling—wait for it—magazine subscriptions. That’s ridiculous, definitely, but no more ridiculous than the pitiful range of futures available to 18-year-olds today. So Star climbs on board and joins a business mimicking a makeshift family, one destined to become more nefarious and dispiriting and Lord of the Flies the more one opts to dwells on it.

Everyone’s damaged and everyone’s getting fucked up, but 25 percent of all the subscriptions you can sell is still 25 percent. Star’s co-workers are the classmates you kinda worried about back in high school. Resplendent in eyeliner and a succession of trailer-trash get-ups, is Riley Keough’s Krystal the crew’s mogul, or its bored, trapped middle manager? Her deputy, played by Shia LeBeouf, may or may not be a manipulative dick, but his and Lane’s feral romantic chemistry electrifies American Honey; much like in the real world, what seems like true love is capable of distracting us from how bleak and transient things are. Kids disappear, there are always new ones ready to replace them, and Arnold’s willingness to allow her audience to locate submerged subtext is among this movie’s many strengths. Tears welled up on occasion in my eyes, the first ones in quite a while, shocking me.

When the movie wound down, abandoning us at dusk in a lake by a campfire, I slowly rose from my seat and drifted out of the theater and into the cold. It was election night, and though no one knew where the returns would lead us, there was a quiet sense that all was well, that everything was gonna come up aces. Love would conquer. I felt hopeful.