Waiting for That Black Swan

The Black Marble and Carter-era American films that tried to split the difference between national disillusionment and slapstick comedy. 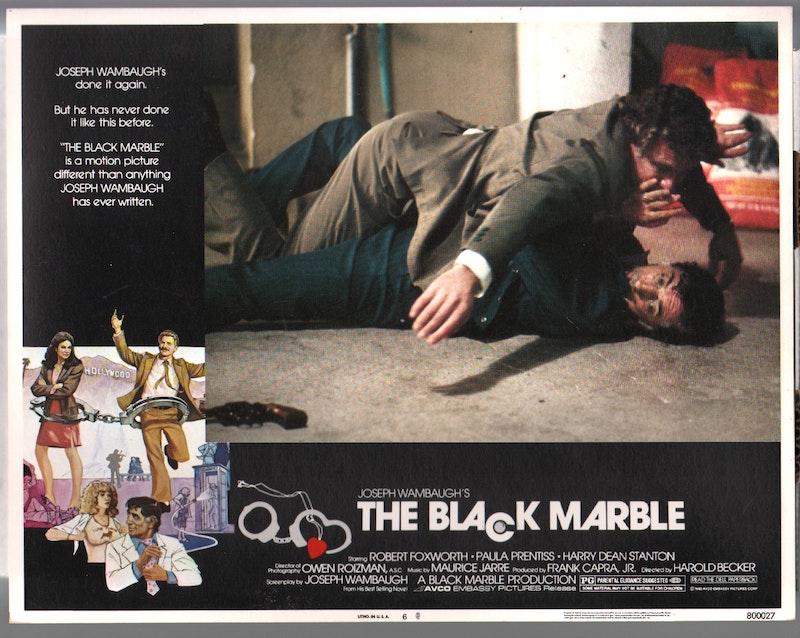 A wave is going to break, a black swan will appear, and everything is going to be completely insane again—soon. Despite the events of the last year and a half, it doesn’t feel like the eye of a storm. Something really bad is about to happen. I’m basing this entirely on my appendectomy scar: like the animals, it knows before we do. Unfortunately my body is unable to tell me any more than that, and rather than dwelling on possible pain in the future, let’s redirect our focus to dreadful years that have already passed.

The Black Marble, directed by Harold Becker and adapted by Joseph Wambaugh from his novel, came out in early-March 1980. Michael Cimino’s Heaven’s Gate was still three seasons away, but a tide had already turned against cynical and fatalistic movies after Rocky and Star Wars. Naturally this extinguished paranoid CIA-inspired thrillers like The Parallax View, Three Days of the Condor, and The Internecine Project, but even Robert Altman’s acerbic and formally challenging films gave way to the work of his more easy-going apprentice Alan Rudolph, as well as Altman’s own run of duds like Quintet, A Perfect Couple, and the shelved HealtH, a political satire meant to come out during the 1980 summer conventions that got shelved and thrown into the Film Forum a year later, never to be screened again besides a few film festivals here and there.

I haven’t bothered watching the copy of HealtH currently on YouTube only because it’s in the wrong aspect ratio, and I can wait another 10 years for a “lost” panoramic Altman film near his prime run. But if it was as accommodating and self-effacing as The Black Marble, 20th Century Fox would’ve put it out. At the same time, The Black Marble didn’t do well—it still came out, but this late-1970s, early-1980s strain of tempered (or diluted) dramatic comedies didn’t have much more commercial potential than something like Night Moves or Cisco Pike. Becker and Wambaugh’s film is filled with people and details that litter others like The Big Fix, Between the Lines, and Cutter’s Way, an visible ennui a decade after the tragedies of the late-1960s and the demoralizing 1970s.

Robert Foxworth and Paula Prentiss star in The Black Marble as two LAPD detectives assigned as partners against their (her) will. Sgt. A.M. Valnikov (Foxworth) is a hapless, weepy drunk: we meet him at a Russian Orthodox Church that he leaves in a drunken stupor, only to slip on wet stone stairs with his handcuffs fastened tightly around his balls. Some little old ladies get a peek and scream. Besides the stock premise, Wambaugh’s dialogue sounds ripped from a dime store police paperback. “Some people always pull the black marble…” This almost never works in film, and even admirable experiments like Rian Johnson’s Brick are hard to take. It’s not French Exit bad, it’s not that stilted or dysfunctional, but this is the kind of dialogue and characters that work on yellow pages and have less to offer in the flesh.

Prentiss plays Natalie Zimmerman, and of course after a couple predictably rocky weeks together looking for a show dog kidnapped by Harry Dean Stanton, she ends up in bed with Foxworth. And of course his partner (“Charlie Lightfoot”) was killed in a “hunting accident” and he drinks to excess to dull flashbacks to Charlie’s autopsy. What begins as a very broad, sitcom style performance does turn slightly into a compelling, if not terribly deep, picture of a traumatized middle-aged man in crisis. Again, this particular balance of drama and comedy—about half and half—has never been common in American movies, and people often don’t know how to take it because they’re not used to it. You don’t have to look long for the particularly stupid criticism that a movie “didn’t know what it wanted to be.”

The Black Marble belongs to this strange sub-genre of Carter-era cinematic sighs: a weight has been lifted, but what now? It’s such a short period in American pop culture, and the more material I watch, read, and listen to from the late-1970s and early-1980, I’m reminded of where the world is now. In films like The Black Marble and The Big Fix, you see “serious filmmakers” dipping their toes into slapstick and, for the first time since the mid-1960s, holding the hands of the audience. Not all along the way, and the crotch trauma (Stanton ends up a eunuch by the bite of a fight dog) sits right alongside fully earnest romantic sequences, love scenes, and examinations of addiction and PTSD.

People rightfully pine for “movies made for adults,” but a middle ground was offered at the end of the 1970s. Nobody wanted anything diluted or adulterated, and so Beverly Hills Cop was one kind of movie, and Absence of Malice was another. Going back just three years from that Sydney Pollack film to his own Tootsie in 1982, there’s a difference you can feel in your gut, with a movie that not only allows itself to be different things but succeeds.

The Black Marble is not that kind of success, and like other “feel-good-downer” films of this strange sub-genre (The Late Show, with Art Carney and Lily Tomlin, is another good one), you can feel the void of anything to believe or invest in leading directly to Ronald Reagan and the massive changes in pop culture and American life in the 1980s. They’re films without homes, belonging comfortably to neither decade, hanging in the air with hope, humor, and little else. No wonder movies like Airplane! and The Verdict won the decade—who wants stepped-on stock? Curios now, it’s no wonder audiences had little enthusiasm for films like this that tried to split the difference between profound national disillusionment and ball jokes.