The Blows of Rocco

Luchino Visconti's Rocco and His Brothers (1960) is a work of operatic cinema worlds away from his own hysterical The Damned (1969). 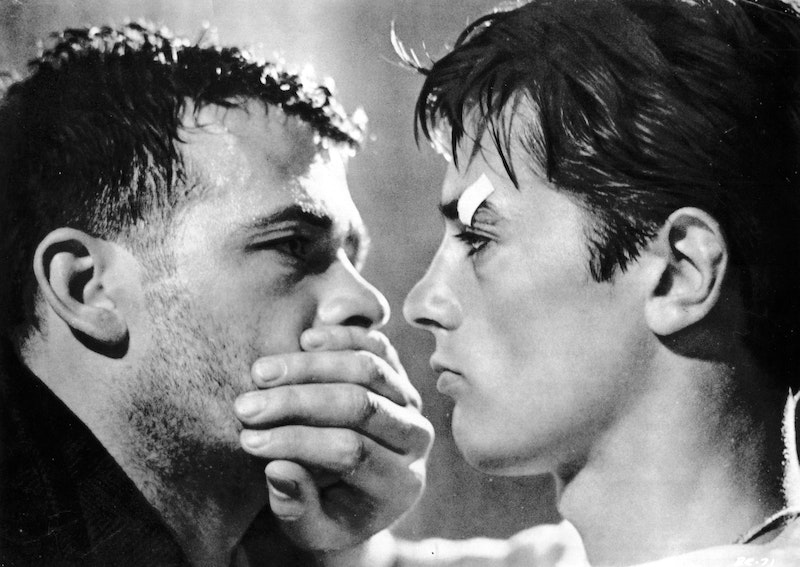 Luchino Visconti’s films are known for their operatic qualities, especially visible in his 1969 The Damned. There, Visconti creates a world of hedonism, ideology, and homoeroticism characterized by over-the-top performances bordering on campy. His earlier film, Rocco and His Brothers (1960) fits into the category of operatic cinema but the difference between that and The Damned is striking.

A film worthy of comparison to Giuseppe Verdi’s great operas and Dostoyevsky’s moral and spiritual sagas, Rocco and His Brothers focuses on joy, sadness, and troubles of the Parondi family. Leaving her home in a Southern region of Italy—Lucania—Rosaria Parondi and her four sons arrive to the grand city of Milan. The patriarch of the family has died and their life in Lucania was one of misery and poverty. Rosaria’s oldest son, Vincenzo, lives in Milan and is about to be engaged to Ginetta (played by the beautiful Claudia Cardinale). Rosaria and Vincenzo’s brothers (Simone, Rocco, Ciro, and Luca) burst in on the celebration, which turns sour.

They find themselves practically homeless, missing their beloved Lucania. At the beginning, they find some ways to flourish: Simone trains to be a boxer, Rocco (Alain Delon) enters the army, and Ciro completes his schooling and finds a job at a near-by Alfa Romeo factory. The contrast between the seemingly idyllic peasant life in Lucania and an increasing coldness of the industrialization adds to the family’s longing to be back home.

The family appears to be tight-knit until Simone begins his descent into debauchery and alcoholism. Although he’s a talented boxer, he lacks discipline to get better and win. He’s a thief, who regularly scams women. Simone develops a relationship with a prostitute, Nadia (Annie Girardot) but this love affair is doomed from the beginning. Nadia’s a jaded woman, who considers her relationship with Simone transient. He’s just a place holder until another man comes along.

During Rocco’s time in the army, Nadia’s arrested and spends time in jail. They run into each other, and exchange a few words at the café. But something deeper happens in this moment. Rocco breaks through her indifferent demeanor and tells her to not be afraid. He’s at peace with his life, and assures her that one can choose the life one wants to live. Despite Nadia’s skepticism, she finds faith in Rocco and the two begin a love affair.

In the meantime, Simone finds out about this affair and decides to enact violent justice against Rocco and Nadia. Catching them in an embrace, Simone’s enraged and demands an apology. In a fit of pure hatred, he fights his brother and rapes Nadia, while Rocco’s forced to watch.

This is the breaking point not only for Rocco and Simone but also for the entire family. Rocco sacrifices his relationship with Nadia in order to preserve the family structure. In addition, he becomes a slave to boxing in order to pay off Simone’s debts, who ends up going to jail for Nadia’s murder. Ciro maintains strength intent in finding success in Milan, and Luca, the youngest, vows to return to Lucania with Rocco. This longing is one last hope that peace will be restored in the Parondi family.

Rocco and His Brothers is a gripping film (it serves as the great inspiration to Martin Scorsese and Francis Ford Coppola). Delon’s Rocco is innocent, just, honorable, just some of the characteristics that render Delon’s performance sublime. But this inherent wisdom and moderation Rocco has disappears when he tries to (honorably!) save the crumbling foundation of the family. The ethical act turns into passionate aimlessness that results in his own private emptiness.

Visconti’s vision is primarily about belonging. The Parondi family is uprooted in every possible way, and one bad choice leads to more destruction. They’ve lost their foundation, and the soil they stand on is one of concrete jungle as opposed to the land where olive trees grow. Rocco’s the one who sees both sides of the world, and is highly adaptable. Delon plays him in such a way as to reveal a man who’s an ascetic, dedicated to God. He’s dedicated to Nadia, but decides that a sacrifice is needed in order to set the family on a straight path again.

Rocco’s naïve. His sweetness and belief that people are essentially good and that the strong should uplift the weak (even if it means sacrificing themselves) becomes the very thing that ends up destroying his life. Rocco and His Brothers is essentially a religious film. Although it barely mentions God, and occasionally shows some Italian peasant superstitions, the story of the Parondi brothers is similar to Cain and Abel.

In Genesis, chapter 4, God looks favorably upon Abel and because of this Cain is jealous. God asks Cain why is he “angry and dejected?” Cain lures Abel into the field and kills him. In verses 9-12, God asks Cain, “Where is your brother Abel? He answered, “I do not know. Am I my brother’s keeper?”/God then said: What have you done? Your brother’s blood cries out to me from the ground!/Now you are banned from the ground that opened its mouth to receive your brother’s blood from your hand./If you till the ground, it shall no longer give you its produce. You shall become a constant wanderer on the earth.”

Although no brother dies in Visconti’s film, the textual allusions remain. The opposite to Cain, Rocco considers himself to be his “brother’s keeper.” For him, justice means that he’s responsible for his brother, yet he misplaces this responsibility into personal accountability for Simone’s vile actions. Rocco “turns the other cheek” as it were, and sees Simone as one who suffers the most.

Yet, in the end, Rocco’s sacrifice is meaningless, despite its good intention. He remains caught up in his holiness without even recognizing the goodness in himself. The city of Milan is the untilled and barren soil for the Parondi family, and they’re lost in the new world they inhabit. Will Luca, the one whose innocence is still not overtaken by experience, return to the soil that gave him life? Or is he too, much like Rocco, doomed to be “a constant wanderer on the earth?”