If you hate entertainment that re-imagines familiar stories through a "woke" lens, there's a good chance you’ll hate the new Cinderella, but I think it's a joyful, mostly enjoyable revision. B 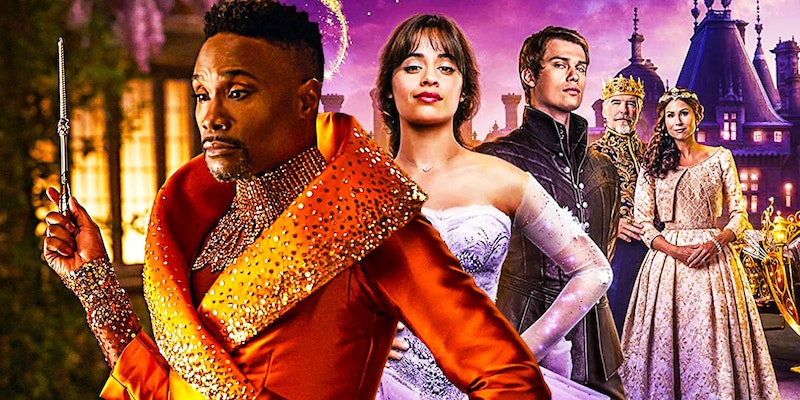 If you hate musicals or entertainment that re-imagines a familiar story through a "woke" lens, there's a good chance you’ll hate the new version of Cinderella. I think the new Cinderella is a joyful, mostly enjoyable revisiting of the familiar tale, one boosted by some well-executed musical numbers and a winning lead performance from singer Camila Cabello. The film's pretty simple: It's the traditional, centuries-old Cinderella tale, but with a distinctly feminist makeover, which is the same thing Disney did with its recent live-action reboots of Aladdin and Beauty and the Beast.

Cinderella (Cabello) is a still an orphan living with her wicked stepmother, but now she has career ambitions, to be a dressmaker. She still has a romance with a prince (Nicholas Galitzine's "Prince Robert"), but she's in no hurry to get married or become a princess. There's also a king and queen (Pierce Brosnan and Minnie Driver), whose arc proceeds as if the queen discovered The Feminine Mystique halfway through the movie, and they have a young daughter (Tallulah Greive) with her own plans for governance of the kingdom. Even the Wicked Stepmother (Idina Menzel) is humanized, and given thwarted dreams of musical stardom.

And there's more racial diversity than Cinderella movies typically offer—and the "fairy godmother" is a man, played by Pose star Billy Porter. Does the very thought of this piss you off ? Does it make you decry the decadent, woke perfidy of the alliance between Hollywood and Big Tech, as demonstrated in this Sony production, which Amazon released? If so, wait until next week's Everybody's Talking About Jamie, Amazon's triumphant musical movie about a British teenager who dreams of becoming a drag queen. The movie's promoters, meanwhile, probably didn't help matters with that viral video of the movie's cast—including Corden in a mouse costume—blocking a highway in Los Angeles while dancing.

Cinderella was written and directed by Kay Cannon, a former 30 Rock writer who was a primary auteur of the Pitch Perfect movies, writing all three and producing the last two. She wrote and directed 2018's Blockers, a fantastic, raunchy comedy that also had a feminist twist. Cannon's Cinderella, at least musically, takes a similar approach to the Pitch Perfect series: It's a musical, but most of the songs are pop standards. There are elaborate, well-staged numbers out of Janet Jackson's "Rhythm Nation," Queen's "Somebody to Love," Ed Sheeran's "Perfect," and a montage of Salt-N-Pepa's "Whatta Man" and the White Stripes' "Seven Nation Army." There are also some original songs, which are forgettable.

Most of what makes the movie go is Camila Cabello, in her first major movie role after several years as a pop star. She's an immensely appealing performer. Obscure English actor Nicholas Galitzine is fine as the prince, although Nicholas Hoult's glorious turn as Emperor Peter III on the Hulu series The Great was a much better version of the Royal Failson performance that Galitzine was going for here.

Bresnan is hilariously boorish as the king, with Driver getting her best part in years as the queen—and it turns out she can sing. (Brosnan, as anyone who remembers Mamma Mia, can’t, but at least this movie plays it for comedy.) And the Broadway legend Menzel shows once again why she’s one of the best current musical performers.