In praise of gay schlock. 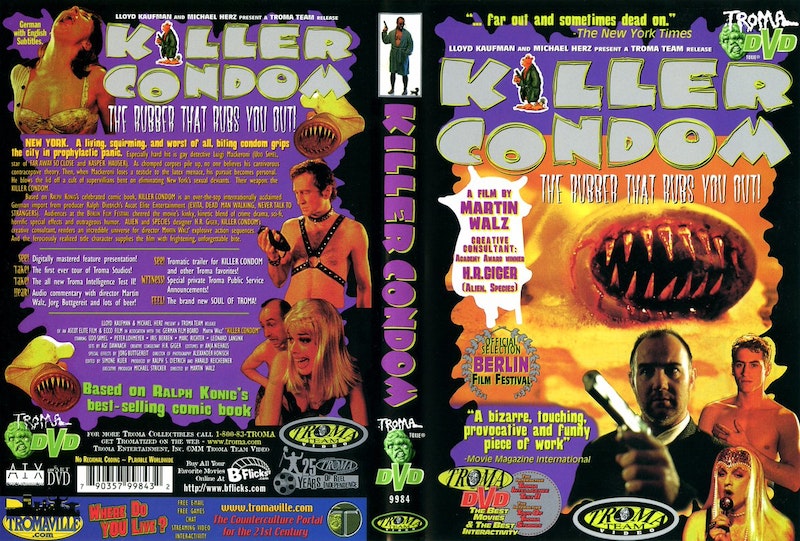 In the 1996 classic Killer Condom, directed by Martin Walz, hardboiled Detective Luigi Mackeroni (Udo Samel) is investigating the ludicrous case of a monstrous condom biting off the nether regions of seedy men in downtown New York (where everyone, bafflingly, speaks German).

During the investigation, the chain-smoking Mackeroni falls for gorgeous rent boy Billy (played by Marc Richter), who along with a colorful set of transvestites and hookers, aim to track down the source of “the rubber which rubs you out.” Distributed by Troma Entertainment and based on the comics by Ralf König, Killer Condom is an example of an underrated subgenre of LGBT cinema: gay schlock.

In Killer Condom, we jump straight from hot and heavy scenes of salacious sodomy between Detective Mackeroni and Billy to gruesome scenes of the pernicious prophylactic (designed by H. R. Giger) chomping off willies. Gay schlock is wonderful mix of homoerotic smuttiness and the very best of splatter and exploitation cinema. Homoeroticism has always been part of gory horror flicks. Films such as A Nightmare on Elm Street 2: Freddy’s Revenge (1985) and William Friedkin’s Cruising (1980) are now seen as gay classics.

The 1990s saw a brief mainstreaming of gay schlock within what was called New Queer Cinema—an attempt to merge gay liberation politics with the nihilistic punk scene. Greg Araki’s “gay Thelma and Louise” film The Living End (1992) follows lovers Luke and Jon on the run after they kill a homophobic cop. In Todd Verow’s Frisk (1995) we watch as our protagonist Dennis pushes his sadomasochistic desires to their ultimate conclusion, capturing and killing twinks.

A clear miss was Douglas Langway’s Raising Heroes (1996) which told the story of a gay couple fighting back against predatory mobsters. The film itself suffered from a low budget and overt seriousness, however the title’s tagline “This time the gay guy’s got the gun!” is quintessential gay schlock. Canadian filmmaker Bruce LaBruce may be the most consistent gay schlock director, particularly when he’s at his most pervy and least art house. Whether it’s a skinhead penetrating disgorged intestines in Otto or Up With Dead People (2008) or the infamous “stump fucking” scene in Hustler White (1996), LaBruce is the master of mixing dicks and dissections.

What defines gay schlock isn’t necessarily its transgressive or horror elements (staples of LGBT cinema since the heyday of John Waters) but the complete absence of “camp.” Camp has always been a crutch for gay filmmakers, an attempt to ironically distance audiences from the mischievous glee experienced from sleazy sex and violence. Gay male filmmakers are at their best when toxically masculine—having their young male actors stripped down and dissected for their own amusement. Camp tries to cover up this perversion, always winking at the camera to pretend this is all a disingenuous show.

It’s for this reason that popular gay directors, such as American Horror Story creator Ryan Murphy, never quite achieves heights of gay schlock. Murphy splatters his shirtless twentysomething actors with buckets of blood, but only ironically. Every attempt at schlock by Murphy is ruined by his jokey dialogue designed to re-establish his morally and politically progressive “queer” bona fides. It’s a trap for other gay filmmakers as well.

Paul Etheredge-Ouzts’ 2004 film Hellbent was advertised as the “first gay slasher” but was a forgettable entry in the weird early-2000s attempt at gay genre mixing. The problem with Hellbent was its reliance on pretty faces and quips. It lacked the courage to feed its hard-bodied male cast into a meat grinder.

More recent attempts at gay slashers, such as Midnight Kiss (2019), a segment in the Into The Dark anthology series, similarly rely too heavily on tiresome Californian in-jokes about drag and Gaga and too little on quality kills. Here’s hoping a new generation of gay male directors can embrace Detective Mackeroni, and appreciate the sleazier side of homoeroticism and violence without ironic distance.