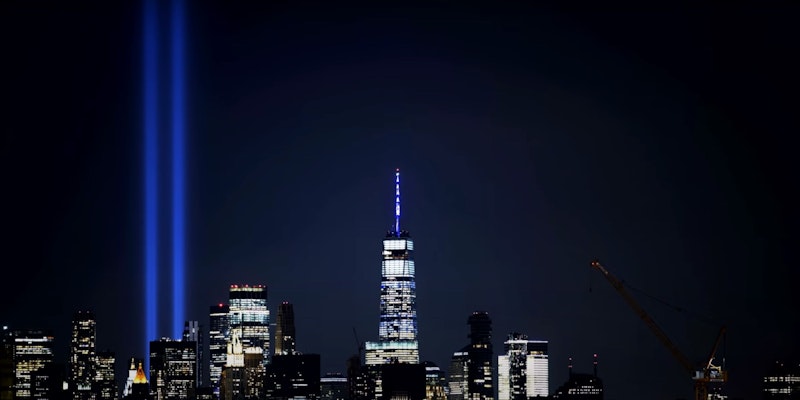 The 20th anniversary of 9/11 is tomorrow, meaning we're seeing a lot of the Towers falling, Bush Administration veterans, and chin-stroking introspection about the effects of U.S. foreign policy. This has been demonstrated in an endless series of new documentaries, looking at 9/11 from about every imaginable angle. I didn’t, for instance, watch the one that caught up with the now-grown kids who George W. Bush was reading to that day, nor did I see the separate docs told through the eyes of the FBI and the CIA.

But I did watch those four 9/11-related docs:

NYC Epicenters 9/11-> 2021½: Spike Lee’s on a roll, with some of the best work of his career, like BlacKKKlansman and Da 5 Bloods. Lee's new documentary on HBO, NYC Epicenters 9/11-> 2021½, might be Lee at his most Lee-like. It's a four-part, eight-hour documentary about New York City seen through the prism of the attacks, the coronavirus pandemic, and everything in between. Lee's known for his messiness, and that's the case here. The film jumps back and forth in time, covering those two major topics, as well as dozens of others, from the George Floyd protests to various lows of the Trump Administration to the January 6 Capitol riot to the Andrew Cuomo scandals to the Central Park Karen incident.

Lee interviews hundreds of people, from famous actors and politicians to survivors of both 9/11 and the pandemic. He’s all over the film, seen on camera and heard during interviews, while sprinkling in various personal stories and clips from his own work. Some of the segments are powerful, especially those about the 9/11 attacks themselves and about the Capitol riot. But the film doesn't tell us much that we haven't heard already.

The stories about what hospitals were like during the pandemic are inspiring, but nothing new. We get rehashes of both the 2002 Jules and Gédéon Naudet documentary about the attacks, and of the World Trade Center tightrope walk from Man on Wire, as if we haven't seen both of those movies already. Lee also treats it as an important, watershed moment that rapper Busta Rhymes, at the Grammys in 2017, referred to Trump as "Agent Orange," as if giving him that nickname had any effect on anything.

Too Soon: Comedy After 9/11: Too Soon, which debuted on Vice September 8 along with some in-theater showings, is directed by Nick Scown and Julie Seabaugh. It's both a history of how the comedy world responded to the 9/11 attacks, and a documentary think piece about what's funny, appropriate, and where the line is when it comes to 9/11 humor.

It hits on all of the comedic touchstones of that era: The Gilbert Gottfried roast, but also Howard Stern's famous broadcast on the morning of the attacks, the Onion's post-9/11 issue, the returns of Letterman and SNL, George Carlin's Complaints and Grievances special, and the initial rise of Jon Stewart's Daily Show. Too Soon is like a 9/11 version of The Last Laugh, the documentary from 2014 in which Mel Brooks and other comedy luminaries attempted to establish an ethical framework about the appropriateness of humor about Nazis and/or the Holocaust.

Too Soon also looks at those who landed on the wrong side of that line, starting with Bill Maher, who was fired from ABC for a statement about cruise missile attacks that was accurate, not a joke, and considerably less offensive than the smug drivel that makes up the bulk of Maher's act these days. The film ably captures what that moment was like, and provides some insight. Too Soon avoids the off-putting smugness that's often endemic to documentaries about comedy, with comics declaring themselves the world's last, most necessary truth-tellers. That said, I don't know that the documentary including a vintage Louis C.K. masturbation joke was a wise idea. Yes, it’s still too soon for that.

9/11: Inside The President's War Room: If you're making a movie or TV show in which you're trying to sell Republicans as respectable to a primarily liberal audience, Jeff Daniels is the guy you get. Daniels played James Comey in a Showtime miniseries, and his character on Aaron Sorkin's The Newsroom, while never sounding like anything besides an Upper West Side liberal, would occasionally mention that he was a Republican.

Now, Daniels is the narrator for 9/11: Inside The President's War Room, a new Apple TV+ documentary about the executive branch's response on the actual day of September 11. The documentary is useful as a tick-tock of the day; I recognized a couple of people who played themselves in Paul Greengrass' United 93. But the rest of the time, it's more an exercise in score-settling and butt-covering by various Bush-Cheney veterans. I was hoping the one-two punch of the Afghanistan withdrawal and the anniversary would put a stop to the George W. Bush nostalgia, and if any good comes from this documentary, it's how ridiculous the defenses and rationalizations sound coming from Dick Cheney and Ari Fleischer.

In the Shadow of 9/11: Director Dan Reed's last film was 2019’s Leaving Neverland, about the sexual abuse allegations against Michael Jackson. When Jackson's online fandom reacted to its release with extreme vitriol, Reed likened them to "religious fanatics" and "the Islamic State of fandom." Now, Reed has made a documentary about people who don’t deserve to be compared to terrorists, even though their own government did just that. The In the Shadow of 9/11 doc, which aired in August on PBS as part of the Frontline series, isn't about 9/11 per se, but it’s about something that happened not long afterward, and has happened repeatedly in the years since: The government busting of a "terrorism plot" that was anything but. There have been several instances in which a supposed terrorism plot was in fact the creation of government informants, and the case of the Liberty City Seven was one of them (another documentary, 2014’s The Newburgh Sting, was about another).

The plot, which the government “busted” in 2006, concerned a group called the Universal Divine Saviors. They were a cult of weirdos that didn't have anything to do with radical Islam, terrorism, or violence, and were arrested after approached by an informant, who they were trying to scam. A lot of what we were told about the War on Terrorism in the years after the attacks wasn't exactly true; see Spencer Ackerman's brilliant new book Reign of Terror for more on that. In the Shadow of 9/11 is another example.