Creative Control is a sharp send-up of modern tech. 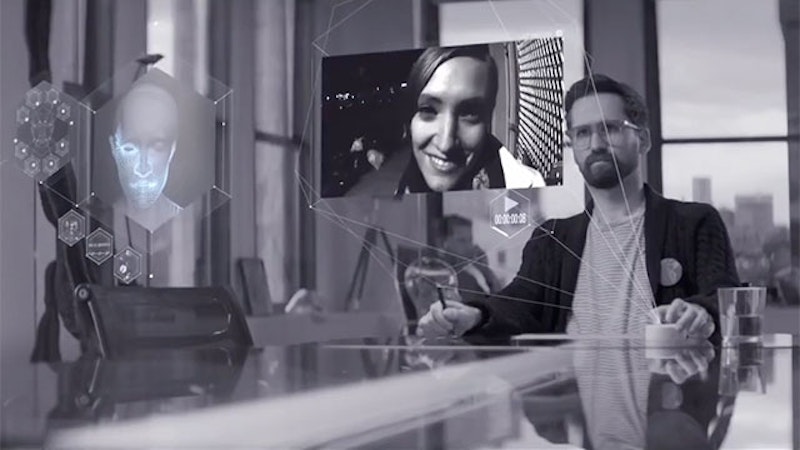 Creative Control is a rare cinematic treatment of modern technology that has something to say, without getting heavy-handed about it. It’s an enjoyable effort, with statements to make about everything from tech to the male gaze—and it’s got its share of laughs, too.

Directed and co-written by Benjamin Dickinson, who also stars, Creative Control is set in Brooklyn in the not-too-distant future. Dickinson plays David, an executive with an upstart advertising firm who’s tasked with a new product that resembles a less invasive, more functional version of Google Glass.

As any technological invention will almost immediately be put to pornographic purposes the technology, called Augmenta, allows the exec to create an avatar of a comely fashion assistant named Sophie (Alexia Rasmussen), and more or less have an affair with it. Complicating things? Sophie is the girlfriend of David’s best friend (Dan Gill), a Terry Richardson-like creepy fashion photographer, a guy taken to texting his pal nude photos of his various conquests.

Oh, and David already has a gorgeous yoga instructor girlfriend named Juliette (Nora Zehetner), who spends most of the film lamenting her stalled career.

Not many of the stars here are all that familiar; Rasmussen starred in the underrated indie horror film Proxy, while Zehetner played Marc Maron’s girlfriend on the comic’s IFC series. Reggie Watts plays an even more weirdo version of himself, as the firm’s client, while Vice founder Gavin McInnes, of all people, is David’s boss.

Creative Control is Dickinson’s second feature as director; his first, 2012’s First Winter, focused on a yoga retreat that’s reprised here. He creates an effective world, shooting mostly in black and white with the exception of the virtual reality scenes. The score, meanwhile, is heavy on the classical canon, also throwing in some original music from Drazen Bosnjak.

There are a lot of ways this could’ve gone wrong. It could’ve devolved into a tiresome jeremiad against hipsters and/or millennials. It could’ve made evergreen points about the emptiness of the advertising business. It could’ve been an earnest, heavy-handed plea for us all to put down our cell phones, and start interacting with each other for real.

Instead, Creative Control comes at its material with both visual creativity and inventive storytelling. The final scenes, especially, are hilarious, both bringing together the film’s David and Juliette halves and making the case that the nonsense of the technology and the hippie-dippy worlds aren’t all that different after all.