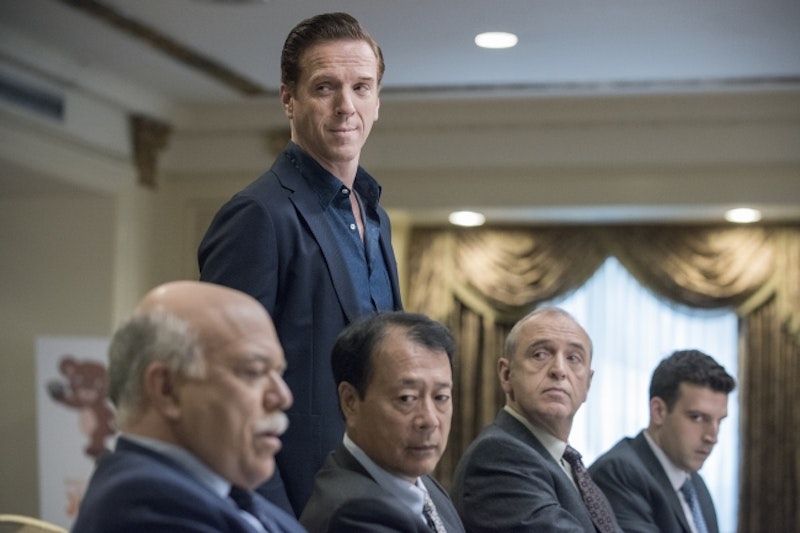 I just reluctantly finished the eighth episode of Showtime’s new star-vehicle Billions. The show follows Damian Lewis and Paul Giamatti—playing a hedge fund manager and a district attorney, respectively—as they try to outdo one another, disregarding the law and any rudimentary sense of morality, attempting to win this season-long pissing contest. Billions is not subtle, and the show’s intentions are clear: there are no “good guys”; ultimately, everyone is corrupt and selfish. It’s ostensibly a takedown of both Wall Street greed and prosecutorial moral superiority.

Wall Street narratives are usually misinterpreted. A generation of wannabe financiers took Gordon Gekko’s “greed is good” speech out of context and used it as a personal mantra. Michael Lewis considered his book-length cautionary tale Liar’s Poker a failure after it unintentionally inspired more people to become brokers than, say, art historians. Jordan Belfort is now a frat house hero thanks to The Wolf of Wall Street.

The excess of The Wolf of Wall Street sets the tone for Billions: Lewis’ Bobby Axelrod is a unconvincingly brilliant fortysomething hedge fund manager who dresses like a techie and spends money like Jay Gatsby; Giamatti’s Chuck Rhoades is a district attorney with a trust fund and a stubborn streak. The premise is fascinating enough, but the show itself suffers from sensory overload. “Axe” buys a $100 million Hamptons mansion. Chuck visits a BDSM club. Axe commissions a private Metallica concert. Chuck wants to become governor of New York. Axe pays another $100 million to buy the naming rights to the show’s version of Carnegie Hall.

The worst part is that Billions has become lost in its own profligacy. The show revels in—not chronicling—Axe’s greed and Chuck’s thirst for power. In response to an insider trading accusation, Axe shrugs, saying, in effect, “Everyone in my business does it.” There’s no character, no action, no directorial cue to contradict his statement.

I saw (and enjoyed) The Wolf of Wall Street as a condemnation of Belfort’s fraudulent empire, but plenty of people I talked with about the movie—dudes, exclusively—thought it was a lionization of a folk hero. The money, the drugs, the women; it was a roided-up episode of Entourage for them. In this regard, The Wolf of Wall Street can be considered a failure, conveying the wrong message to a large group of viewers.

Billions, on the other hand, hasn’t failed at anything. It’s finance-porn, and nothing more than that.