London Has Fallen is gratuitous and clichéd. 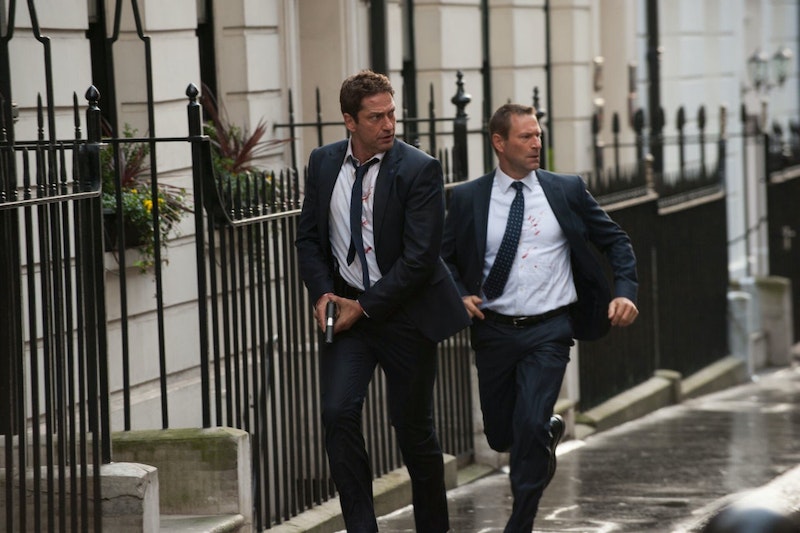 No one believes that Middle Eastern terrorists could turn a Scotland Yard official traitor, surreptitiously swarm London by the hundreds, secure police and military uniforms and vehicles, arm themselves to the teeth, fake the British Prime Minister’s death to necessitate a funeral to be attended on short notice by international heads of state, and then lay waste to the city—all so that they can kidnap the U.S. President and behead him on YouTube. Yet London Has Fallen holds this out as a damning possibility, ushering us into an alternate reality where iconic landmarks combust in CGI conflagrations and foreign leaders die amidst everyday punters.

Predecessor flick Olympus Has Fallen positioned itself as a redemption story, with Banning single-handedly rescuing Asher from North Koreans compromising the White House after he failed to save the First Lady from a car wreck; a lot of people died gratuitous cinematic deaths. But director Babak Najafi angles for a more “buddy comedy” approach, with Banning as a sort of America, Fuck Yeah! Riggs and Asher as a hesitant Murtaugh who occasionally wastes a bad guy and wisecracks everywhere. And since we know that neither of them is gonna bite the big one—Banning’s got a baby on the way, for chrissakes, this is supposed to be his last Secret Service hurrah—there’s little to care about here beyond inventive ways of dispatching foes, the question of whom among the flat footed authorities our heroes can trust, the day players pretending to represent the American national security apparatus freaking out then struggling to find the terrorist stronghold in London, the rampant unreality at work everywhere. Morgan Freeman drone-strikes a dude while on the phone with him! Banning becomes a dad and doesn’t retire! There are worse ways to spend a Friday night, probably.