The frightening “San Junipero,” from the third season of Black Mirror. 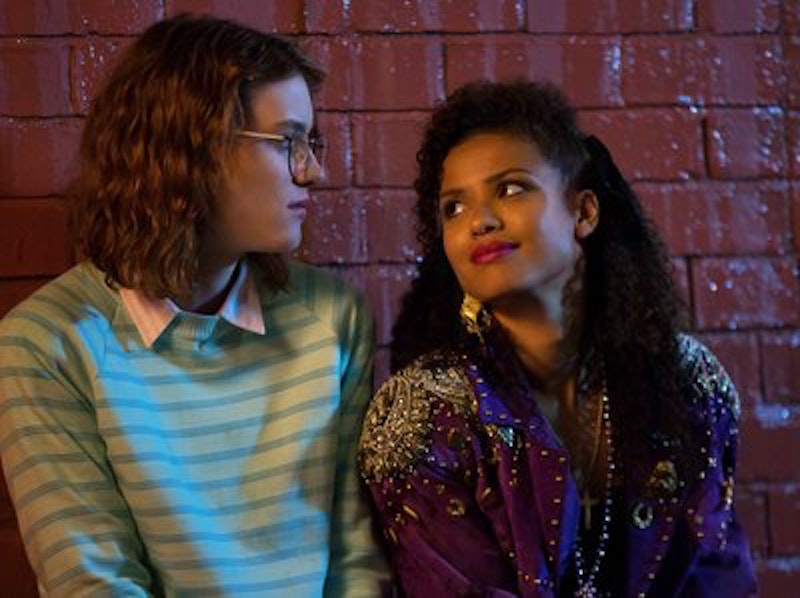 Kelly (Gugu Mbatha-Raw) and Yorkie (Mackenzie Kelly) sit, side by side, as the club rages around them. Kelly just convinced Yorkie to lie—that Yorkie only has a few months left to life, that she and Kelly are old friends—in order to dissuade the affections of Wes (Gavin Stenhouse). The ruse was successful. Everyone in the venue appears to fall somewhere in that sweet spot between 21 and 30. Kelly is styled like a Saved By the Bell refugee; Yorkie resembles a slightly less cloistered version of Mare Winningham’s character from St. Elmo’s Fire. Kelly is drinking, and soon, she will encourage Yorkie to join her, but first, Kelly draws back slightly, appraising Yorkie, who’s as shy and retiring as Kelly is hyper-confident, bold, brassy.

Yorkie isn’t sure how to absorb this attention. “What are you doing?" she asks. “I’m regarding you,” Kelly replies, in the manner of a much older woman. This moment is our first inkling that, perhaps, the scene is not actually unfolding at night, in a seaside resort town, in gaudy, neon-soaked 1987. Things aren’t what they seem, and “San Junipero” doles out hints during its first half hour as Kelly and Yorkie slowly fall in love: the Cinderella-esque conceit that ends each evening at midnight, the fact that both women can only visit town on Saturdays, the fact that they’re also able to materialize in a variety of whens. Anyone who came of age during or just before Ronald Reagan’s presidency will feast upon or recoil from a buffet of period pop and fashion; on a certain level, this may as well be a mild John Hughes movie.

I’ll level with you. This is the point in the review when the critic either spoils the episode outright or pirouettes around what occurs. As is probably common knowledge even among the uninitiated, “San Junipero” is the quintessential Black Mirror Episode Everyone In The Office Can Agree On: it’s bubbly, it’s bright, it’s funny, it’s light, it’s retro without being too obnoxiously Stranger Things, and there’s a relatively happy ending. This sucker, in other words, is fun. So let’s fast-forward to the end and explore why this episode is darker than any writer is willing to acknowledge in print.

In short, “San Junipero” is a virtual reality the elderly in this particular future may visit for five hours weekly. Upon death, users may opt to take a leap into whatever the Great Beyond holds, or spend eternity—or some of it—as ones and zeros in a simulation where pain doesn’t exist.

“The Last Question,” a science-fiction story by the late Isaac Asimov, exists in Asimov’s “Multivac” continuum, wherein humanity has built itself a supercomputer to—essentially—serve as our God. In this particular tale, people in various eras ask Multivac whether entropy is reversible. Again and again, the computer can’t provide an answer, but by the story’s end, our consciousnesses have merged with a more powerful version of Multivac that arrives at a solution that’s chilling my blood as I type this sentence.

In its penultimate section, “The Last Question” imagines individual people as wisps of awareness, freed from earthly bodies, spirits haunting the furthest reaches of space. Even if this actuality is inevitable, it’s unlikely that anyone alive today will be around to experience it. “San Junipero” is potentially more frightening, because its souls are not cast outward, but fed into the cloud, the data banks of glowing servers in a vast, robot-tended warehouse.

But consider this, as our heroines begin their life together in “San Junipero”: data can be corrupted, data can be lost, manipulated and repurchased. What if there’s an earthquake, a missile strike, a terrorist attack? Are there regular data backups? Is there a restoration protocol in place? At whatever point in time this story takes place, this shared virtual reality—for the living, anyway—is regulated for physiological reasons. If we’ve learned nothing about libations and technical advances, they’re never limited to their target audiences, and it isn’t impossible to imagine a further future where the ability to tune out the real world is easily too available to anyone, with disastrous results. (One could argue that, given the all-in-one nature of smart phones, this is already happening on a minor scale.)

Consider this, as well: San Junipero is the ultimate vacation, and vacations wear out their welcome. Life is grit and grin, peaks and valleys, and we define ourselves in large part by how we manage that balance. When we leave them behind, Kelly and Yorkie are in a world with no grit, no pain, no injury, no struggle, no need to earn, no obstacles to overcome: the beach house is just there, whatever frocks they want to wear magically appear, there’s no need to even eat. Given all of this, how long can Kelly and Yorkie remain happy, together in paradise, assuming there are no data breaches and infinite server life? And, of course, the biggest question of all: what is an afterlife, anyway?