Twist and Pout: Narrative Misdirection in Westworld and Arrival

Storytellers trick us by guiding our focus. 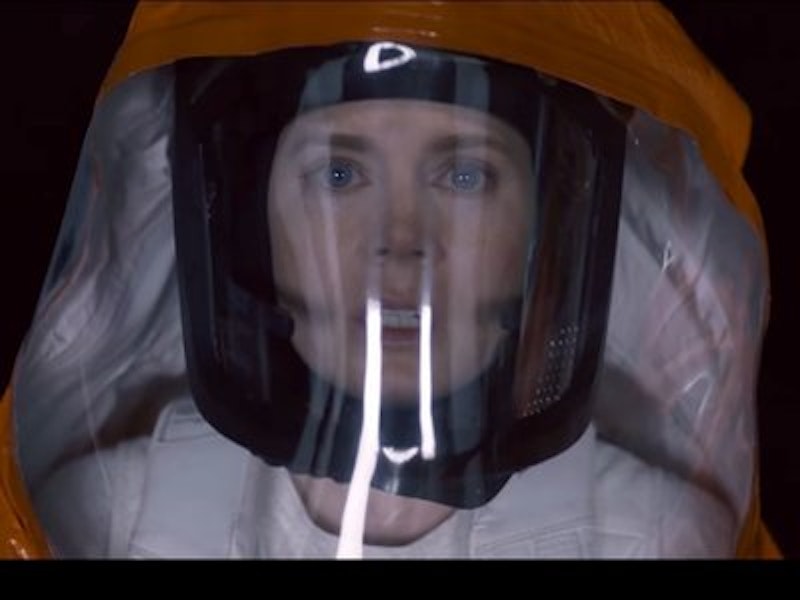 There’s nothing like a good twist—except for a good story, that is. In two of the most talked-about works of science fiction in recent memory, HBO’s Westworld and Denis Villeneuve’s Arrival, narrative backflips don’t just enhance the narrative; they provide the stories with their entire raison d'etre.

The craft is clever, but does it mean anything? Upon closer inspection, do Westworld and Arrival offer anything but dissatisfying misdirection?

Both works achieve their twists by manipulating assumptions about temporality and film grammar. Westworld cuts back and forth between two parallel storylines, and we fail to consider that one of them is a flashback featuring the same protagonist. In Arrival, our minds are trained to interpret sepia-toned inserts as flashbacks, when really they’re flash-forwards. Both pivots occur at the level of structure and form, each a well-oiled mechanism for leading the viewer astray.

In addition to structure, the storytellers trick us by guiding our focus. Both works feature human encounters with a mysterious other—extraterrestrials and androids—that have the shrewd effect of drawing our attention away from the human element itself. We’re more concerned with the mystery of the other, what the heptapods are trying to say or whether the androids can feel, than with the human experience idling at the sidelines. But the human sideline is where all the narrative trickery takes place.

In Westworld, we’re more fascinated by the subjects of Bernard’s study, his sophisticated behavioral coding and knack for android psychoanalysis, than Bernard himself. When he’s revealed, obligatorily, to be an android, the point isn’t that we’ve lost connection with someone we thought we knew. Rather, Bernard’s artificiality is just one more quantum of evidence indicting Ford’s overall cruelty and duplicity. Likewise, Bernard’s sentimental backstory is not mourned as some beautiful fiction, a true lie, but rather represents another peg in the graceless theme that android consciousness is constituted and authenticated by personal suffering.

Michelangelo supposedly said, “I saw the angel in the marble and carved until I set him free." Westworld’s narrative technique felt much the same. Rather than a story with its own sense of momentum, the writers started with a concept, buried it in obfuscations, and reverse-engineered the season using the pen as a chisel. For over 10 hours we sat perplexed as the writers chipped away at the exorbitant block of narrative marble in front of us. But by the end, the form they revealed looked less like an angel and more like an android. The technical flawlessness of its cultivated unreality couldn’t mask its artificiality.

Ultimately, Westworld comes across as a fastidiously constructed prism of misdirection, but not much else. It’s occasionally smart, always brutal, and never tender. It fetishizes its own intelligence and forgets its humanity in the process. High-concept fiction discards the distinction between story and idea. Consider Westworld high-end concept. Rather than tell much of a story, Westworld painstakingly reveals an idea. Ruthlessly committed to precision in pleasure that signifies only pleasure in precision, the show lacked precisely that top chunk of Arnold’s pyramid. In other words, Westworld had so many expensive parts but couldn’t purchase a soul.

Arrival does better on that count. It does have a soul. But I’m not sure we saw enough of it. The twist in Arrival shifts the story of Louise’s relationship and family tragedy from the past to the future. What we interpret as backstory is repurposed to retroactively imbue Louise and Ian with the élan they were missing the first time around.

Throughout the film, Ian in particular is flat and anonymous. As physicist and as plot element, Ian plays a perfunctory role as he loiters around the military tent alongside Louise. She seems to be doing all the real work, and relates to Ian as a generally dependable co-worker. But the end of the film tells us that Louise and Ian were falling in love all along. That insight appears only retroactively and, as such, unconvincingly. Remove the time-shift and Louise probably was just not that into him.

If Westworld conceives of twist as technique, Arrival presents twist as teleology. The twist doesn’t happen so Louise and Ian can fall in love. They fall in love so the twist can happen. Instead of showing the emergence of a human relationship, the twist cuts to the chase. We don’t need to see them fall in love because with linear time collapsed, they already have. The heptapod language sublates Louise’s relationship with the arrow of time itself, but for viewers it’s just a perspective shift allowing for an interpassive stance vis-à-vis the love story. We don’t have to enjoy Louise and Ian as a couple because the narrative mechanism enjoys for us.

Doubtless, I’m interested in vibing about what Arrival says about the general human condition. It’s great to see a decently budgeted movie invite viewers to ponder life and meaning with such confidence. The film’s belief in totalizing harmony, its pantheist trust in higher orders of understanding, its insistence that peace is a tangible potentiality, and its benevolent offer of life-affirmance in the face of unspeakable sadness—all of that works.

But the human experience at the center of those big themes doesn’t work. Arrival prioritizes the metaphysics of alien linguistics over the simple horror of two people who lose a child and then each other.

In both Arrival and Westworld, human experience is subordinated to heavy concept via narrative misdirection. Perhaps it’s too much to ask for both.