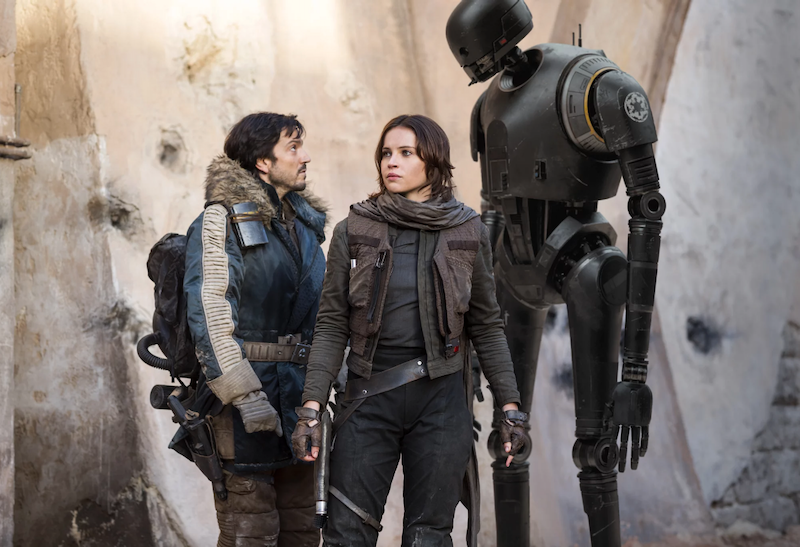 Rogue One: A Star Wars Story, the first of what’s likely to be an endless series of “stand-alone” movies in the now Disney-controlled Star Wars universe, starts off slow, features mostly underdeveloped characters, and looks at the halfway point like it might go down as a huge failure. But luckily, it boasts a fantastic third act and a very satisfying ending.

It’s not as strong overall as last year’s The Force Awakens, which gets the edge for establishing several outstanding new characters that we're looking forward to seeing again. But even though there’s no opening crawl, just one lightsaber, and R2-D2 and C-3PO only briefly cameo, the film does get what’s great about the original Star Wars movies without following them beat-for-beat, like the 2015 movie did.

Set in the period after the prequels and immediately prior to the events of the original Star Wars trilogy, Rogue One’s focus is on a plot by the Rebel Alliance to steal the plans to the Death Star, therefore making Luke Skywalker’s mission in Star Wars possible.

Carrying out the mission is a crew of characters we’ve never seen before, led for the second movie in a row by a female character, this time named Jyn Erso (Felicity Jones). In addition to mentor character Forest Whitaker, the crew also includes characters played by Diego Luna, Riz Ahmed, Donnie Yen, and Jiang Wen—it’s practically a Star Trek crew, in a Star Wars movie.

The problem is, there’s little development given to any of these characters, especially Jyn—the film has no idea who she is or what she’s supposed to represent. Skilled as Luna, Ahmed and Whitaker are, they’re given characters to play with one dimension, if that. The only ones that really pop are Yen’s blind, Force-wielding marshal artist, and a wisecracking robot named K-2SO (Alan Tudyk), who steals every scene he’s in. There’s also a certain character from the older movies, played by a dead actor who’s brought back to life, although it’s hard to tell why doing so was preferable to just casting a different actor.

But it all comes together, as the best Star Wars movies do, in a great third act, with simultaneous battles going on in space, on ships, and on planets/moons. Due especially to creative blocking of the space scenes, and the mechanics of how exactly the plans are stolen (an approximation of a vending machine claw, and a mass email) and a pair of surprisingly climactic scenes, the ending salvages the film.

The Force Awakens, it was frequently pointed out, took advantage of practical effects, and didn’t put millions of dollars of CGI on screen every second. Rogue One goes in the opposite direction—it’s computerized as hell, although to a much greater effect than the Lucas prequels.

In addition, there are some really good ideas that haven’t quite been tried before in the Star Wars universe: Rebel Alliance leaders who are feckless incompetents. A villain (Ben Mendelsohn) who rather than a fearsome Sith lord is more of a middle manager in the Empire. And best of all, repeated, horrifying demonstrations what it’s like, from the inside, for a planet to be attacked by the Death Star.

The new movie also closes a plot hole that’s stood for almost 40 years about why exactly the Death Star had such an easy vulnerability, although I honestly prefer Family Guy’s explanation (“It was aesthetic choice, by the architect… we need to be thinking about resale.”).

Rogue One was directed by Gareth Edwards, who’s best known for the indie horror film Monsters and the 2014 blockbuster version of Godzilla. That film actually had a lot in common with Rogue One; creativity brought to a long-running series, an amazing third act using CGI to marvelous effect, paper-thin characters, and no shyness at all about killing them off.

There are going to be Star Wars movies every December for the foreseeable future, and chances are there’s going to eventually be a dud. But two movies in, even though both films replaced their screenwriters and Rogue One conducted months of reshoots, it appears Disney knows what they’re doing with the new films: hire smart, talented directors who understand what Star Wars is about, and turn them loose on it.