The Smug Gods of Westworld

Do androids dream that they're impressed with themselves? 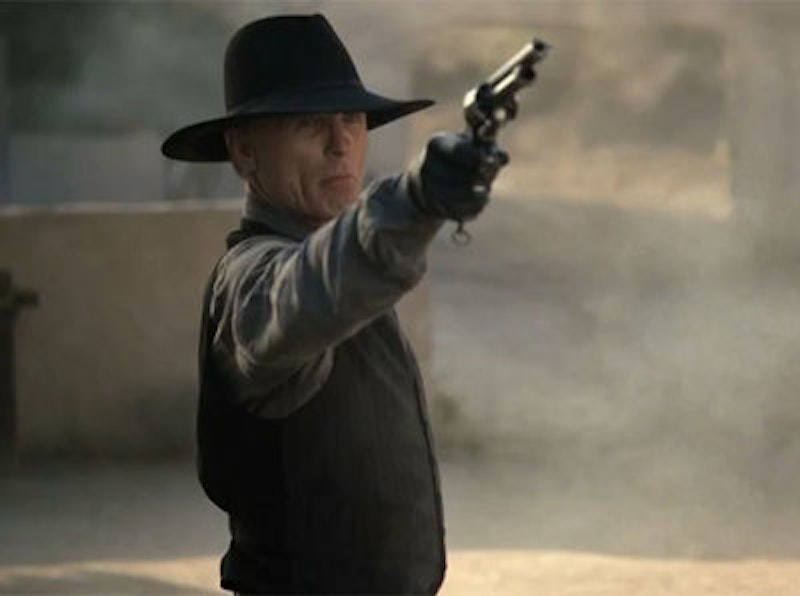 Westworld is complicated. Much of the fun of the HBO series, set in a future sci-fi robot adventure theme park, is following the intricate contortions of the plot, wandering through the maze of false backstories, Easter eggs, trick memories and multiple-time-line reveals.

The complexity is also the show's claim to the status of serious art and quality television. As such, Westworld has not one but two overarching heavy metaphors. First, it's a commentary on slavery; the androids, or "hosts," in the park struggle to gain consciousness and freedom as they are raped, murdered, and exploited for entertainment and profit by their own creators and the callous human guests. Second, the show is a meta-commentary on HBO itself. The Western genre theme park entertainment brimming with violence and sex is a Western genre television show brimming with violence and sex. Westworld is Westworld, catering to the quality television audience just as it caters to the theme park tourists.

The intention, presumably, is to have these two metaphors complement each other. Westworld is meant to comment on both real-life violence and on-screen violence. HBO viewers tune in each week to watch murder, rape, and mayhem, and that’s linked to the way that real life people inflict murder, rape, and mayhem upon the weak and marginalized. Westworld implicates the viewer.

Or at least it's meant to implicate the viewer. Despite its memory loops and Byzantine plots, or because of them, the show never makes it clear how violent entertainment translates into actual violence. A film like Quentin Tarantino's Inglorious Basterds (2009) is carefully organized to show how anti-Nazi World War II films use narrative tropes of revenge and cleansing violence beloved by the Nazis themselves; fascists fantasizing about the glorious deaths of their enemies and anti-fascists fantasizing about the glorious deaths of their enemies are nearly indistinguishable, one from the other.

Westworld, though, doesn't connect the Western genre narratives to, for example, America's love for imperial invasion, nor does it link stories about killing evil Indians to actual treatments of real native peoples. The show, and the park, are hermetically sealed; what happens in Westworld stays in Westworld. Narratives about violence, therefore, can't be related to actual real-world violence, because the show never visualizes anything outside its own backstage and environs. Violent assaults on robots are presented as immoral not because violent narratives lead to violent ends, but because the robots are secretly conscious. The show doesn't think through ethical connections between art and life. It just plays a shell game with its metaphors. HBO television exploitation is like slavery because… the people on screen are actually slaves? You might as well tell me I'm going to hell for kicking a chair because chairs secretly have souls.

The intellectual and moral incoherence of the show is most painful in its much-touted surprise finale. Through much of the series, Robert (Anthony Hopkins), the chief engineer and creative force behind the park, is presented as a scheming supervillain. He loves power, and manipulates humans and robots alike to maintain it—even to the point of murder.

The secret reveal is that Robert the sadistic control freak has actually been plotting all along to help the robots attain consciousness and free them. The cataclysmic conclusion of the series has him manipulating android Dolores (Evan Rachel Wood) into attaining sentience, and then getting her to shoot him in the head. The old white sadist slave owner is revealed to be a conflicted, self-aware good guy, without whose beneficence the slaves wouldn't even know they were slaves. The slave rebellion is secretly orchestrated by the slave master. That's a white savior narrative with a vengeance.

The problem is that there's a third metaphor which most excites the showrunners—that of showrunners as god. Robert is an all-seeing, all-knowing creator, moving his characters and plotlines around the screen with absolute authority. Westworld is his story; it’s the story of his all-knowing creativity and cleverness. No one—not the bureaucrats above him, not his own sentient robots, not his partner or his rivals—ever manages to outthink Robert or out-plan him or even morally checkmate him. He always has answers ready; he's always able to show that he's thought of objections first, and rejected them or resolved them.

Robert's plots and Robert's mind are so all-encompassing that the moral issues the show raises shrink in comparison. The questions about slavery and exploitation, the concerns about the relationship between violent art and real-world violence, are turned into further glorification of the cleverness behind it all. Robert emancipates the downtrodden and simultaneously punishes himself for his own sins, demonstrating his absolute mastery even in his own death. At the center of the maze, there sits a smug simplicity. Westworld is violent, self-aware, and complicated. Therefore, Westworld is good.