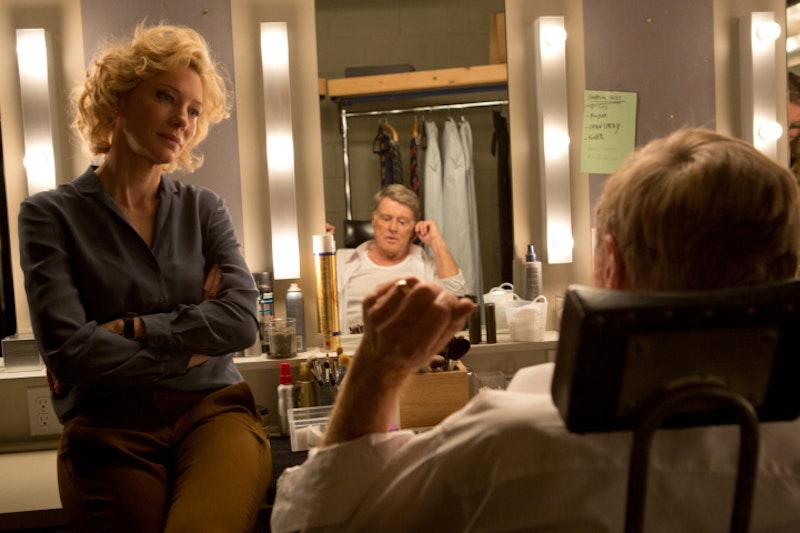 According to Dan Rather, “This movie is less about me, or Mary Mapes, or even George W. Bush—what it’s about is what’s happened to the news, why it’s happened, how it’s happened, and why people should care.” He’s talking about Truth, the movie starring Cate Blanchett, Robert Redford, Elizabeth Moss, Dennis Quaid, and Topher Grace about the Killian documents controversy. In September 2004, 60 Minutes II aired a report about then-President Bush’s service in the National Guard and how he went AWOL for a year from that much coveted cocoon rather than serving in some Southeast Asia jungle. The documents obtained by CBS were quickly questioned and dismissed as easily forged. A breathless segment on Rachel Maddow’s show pointed out how regularly the story appeared in the media throughout 2004, but it was that episode of 60 Minutes II that led to Rather’s resignation, and the firing of Mapes and the entire team that worked with her to bring the story to air. Mapes was misled by Bill Burkett, a veteran with an axe to grind and a few marbles missing. As the final title cards of Truth point out, Mapes hasn’t worked in television news since 2004.

That’s followed by a title card that reads: “Based on Truth and Duty: The Press, the President, and the Privilege of Power by Mary Mapes.” But of course. The whole thing is such a melodramatic pity party for Mapes, who lost her job because she went to air with a story that her team didn’t have enough time to verify. She undoubtedly helped Bush get elected a second time, because after September 8, questions about the president’s service were beyond reproach, and the conversation stuck to liberal bias in broadcast news. Along with the Swiftboat Veterans video against John Kerry, Mapes’ fuck-up was a gift for the GOP, the party of patriots. It’s well-known now that Bush, like other sons of the elite, got into the National Guard because of family connections, and that his whole unit was comprised of fortunate sons and political scions. But by rushing the story, Mapes and her crew left themselves wide open to accusations of bias and opportunism.

So the ostentatiously-titled Truth, overlong and overdramatic, fails to clear Mapes of anything the GOP accused her of in 2004. They jumped the gun, and they were left without a leg to stand on. Contrary to what Rather said on The Today Show, this movie is about Mary Mapes. It gets weirdly personal, and the most cringeworthy thread running through the thing is Mapes’ relationship with her abusive father, who beat her for asking questions. Naturally, she pursues a career in journalism. Even more on the nose, when the whole world is tearing apart her story and her credibility, there’s a scene where Mapes’ father calls Fox News and basically calls his daughter a lefty skank. Mapes’ husband gets him on the horn, threatening to break his arms, when Mapes comes rushing out into the backyard, grabs the phone, and begs her father to stop. Truth is not about how the news has changed—it’s a siren song from someone who’s been blacklisted for over a decade. Sadly, it proves every Republican accusation about its subjects to be true—that they were biased, self-obsessed, and believed the president to be guilty until proven innocent.