But would it matter if he was? 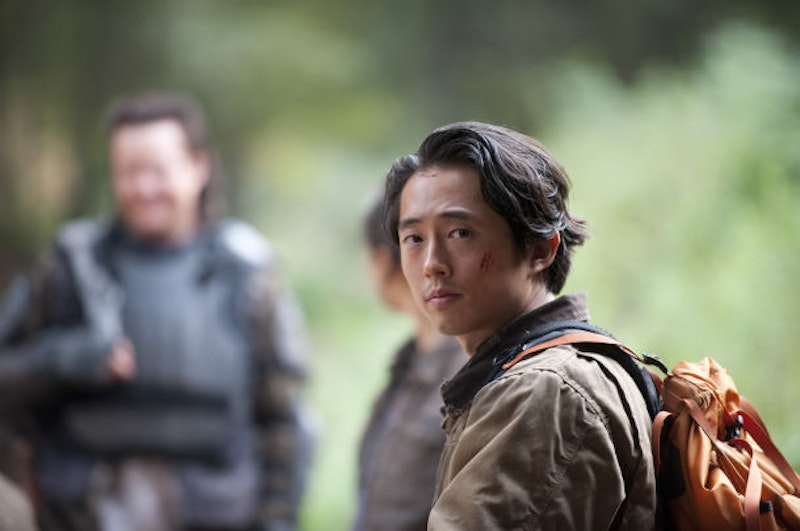 The most inadvertently hilarious line from Monday night’s AV Club Walking Dead video recap: “I don’t know how [much] necessarily I was attached to Glenn, but…” This from Josh Modell after he’s given his not-so-far-fetched explanation of how Glenn actually made it out of an alley full of zombies (despite the bloody entrails you see devoured on screen). Modell rightly says that it would be a “huge, ridiculous cheat” if Glenn survived, but a statement from executive producer Scott Gimple all but admits that’s exactly what happened. “In some way,” Gimple writes, “we will see Glenn, some version of Glenn, or parts of Glenn again, either in flashback or in the current story, to help complete the story.” This, along with actor Steven Yeun’s failure to appear afterwards on Talking Dead (a now-recurring feature whenever a character is killed off), as well as leaked set photos that show Yeun filming scenes that have yet to air, have pretty much convinced everyone that Glenn’s okay.

The more important question is: Who cares? Sure, if Glenn is dead, it’s “shocking” insomuch as TV still rarely kills off long-established characters (Glenn has been around since the first episode), but to what extent does WD even have characters? It makes sense that Modell is conflicted about his attachment to Glenn, because even after fives seasons, what do we really know about him? He’s Asian, he dates Maggie (are they married?), I think he used to deliver pizza, he’s kind of a nice guy (in comparison to, say, The Governor or one of the Wolves). Really, he’s just another poorly-sketched assemblage of ideas about a character named Glenn.

Last night’s episode highlights all the problems I’ve had with WD since season two or three. Besides the totally improbable escapes (if not Glenn then Rick), there’s the egregiously contrived plotting—like when the zombies in the pet store stock room start banging on the door just as the herd out front is passing by, despite the fact that Michonne & co. have been in the store, making far more noise, for God knows how long. Let’s not forget that Rick is always proven right. The random Alexandrian who questions whether Rick knows what he’s doing is almost immediately killed; and, even though Heath takes exception to it, indeed, “They’re not all gonna make it.”

By the way, did anyone else wonder why Glenn and Nicholas left the pet store to set the fire, when other random Alexandrian who was already bit by a zombie could’ve done it? Or, how about Michonne’s reluctance to leave anyone behind? Assuming they stay quiet, you can come back for them later. The whole “we stay together” thing didn’t work out so well for twisted ankle girl. And if Morgan could run to Alexandria in a few minutes, why can’t Daryl drive there on a motorcycle in less than an hour? Add in a lot of exceptional bleakness and excessive gore and you’ve got one of the most popular shows on TV.