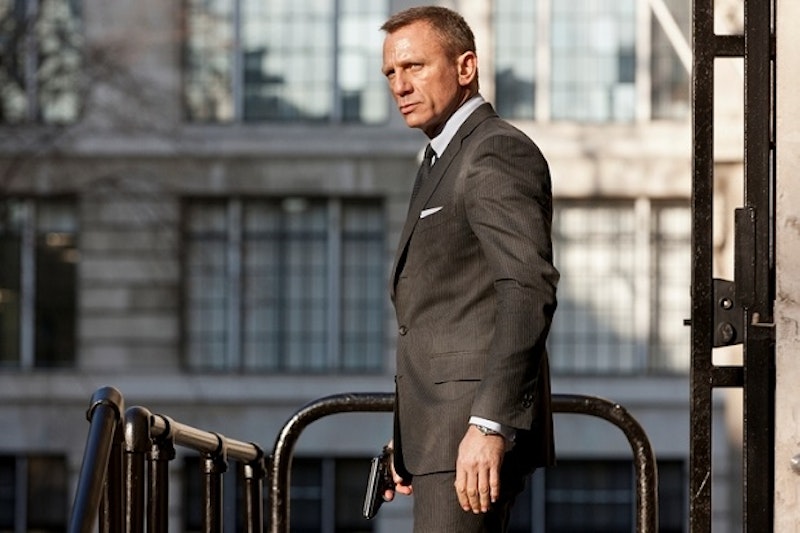 In Spectre, there’s an astonishingly violence sequence in which James Bond (Daniel Craig) and Mr. Hinx (Dave Bautista) fight inside of a moving train. Like the fencing face-off from Die Another Day—one of few redeeming aspects of that film—these are scenes where you breathe a sigh of relief that everyone has SAG health insurance at the very least. Your eyes pop, too, because Bautista, a former WWE wrestler, is exciting here, strong and sure with eyes that bore through the screen. (All of this despite having next to no dialogue.) In contrast to almost everyone else in this cast, he’s a genuine presence. If I’m hopeful about anything Bond post-Spectre, it’s that Hinx will continue to turn up in future Bond installments in the same way that Jaws (the late Richard Kiel), who was also large and imposing and silent and battled Bond on a train, did.

Bond movies tend to follow what might be called comic-book logic, where myriad implausibilities pile up, dialogue is winkingly horrible, and real-world costs aren’t tallied. Bond movies and comic books are inherently geared to young male teenagers. The difference is that comic books are generally monthly and can afford to have a few slow or awful issues per year without risking audience flight. Individual movies, on the other hand, are outrageously costly cottage industries saddled with cross-promotional initiatives. Whether a Bond movie thrills, isn’t impressive, or plain sucks, it will gross an unimaginable amount of money no matter what anyone writes in a review or tells friends who may or may not want to see it. My opinion doesn’t matter, and neither does yours; nothing does.

Reviewers drawing parallels, recently, between Christopher Nolan’s Batman trilogy and Casino Royale, Quantum of Solace, Skyfall, and Spectre are reaching. The Dark Knight Rises was no masterstroke, but at least it felt like something was at stake and striking performances were there to redeem and elevate it into something mildly affecting. Spectre’s more of brazen shrug. So, what’s good? The Day of the Dead opening in Mexico, even if that goes on a bit too long; the aforementioned train throw-down; Bond’s sexing of Monica Bellucci as a Spectre widow, which briefly re-injects some of that kinky pre-PC misogyny that simmers in the series’ DNA. There’s the Spectre meeting Bond infiltrates, this very sinister cabal orchestrating international crime, which I wish had somehow expanded to become the entire movie, excluding Bond, MI6, everything else. Because wouldn’t it be fascinating to explore how such a cabal operates, buys politicians, uses and discards its own members? There’s the scene when Bond goes out in search of Mr. White and finds him dying, in a basement, watching the world burn on multiple television screens; what a powerful image, stranded in a movie for whom he’s a mere plot contrivance. I want a movie about that guy and how he’s arrived at this point in his life, about how Spectre destroyed him.

But this ain’t that movie. This movie is about controlling information (see also, Tomorrow Never Dies, or better yet, don’t), saving MI6 from destruction, and wearing out Christoph Waltz’s already tenuous cinematic welcome. I won’t spoil the ending, but the screenplay wraps things up so neatly one might suspect Spectre is where the Bond series concludes. (It isn’t; there’s too much money to be made.) Will you be nostalgic for the breath of relative fresh air Casino Royale represented? Probably: I definitely was. I don’t expect the same things from action movies that I did when I was 15, either. Yet, I now kind of want pre-Casino Royale Bond fare back. I want tons of secret agents operating at cross-purpose with stupid names. I want plots that have no immediate connection to the prior films. I want awful double entendres. I want a James Bond who wants to be in the movie; here, Craig seems to be as disinterested as much of the audience will be, and the rumors that he’s departing are welcome.