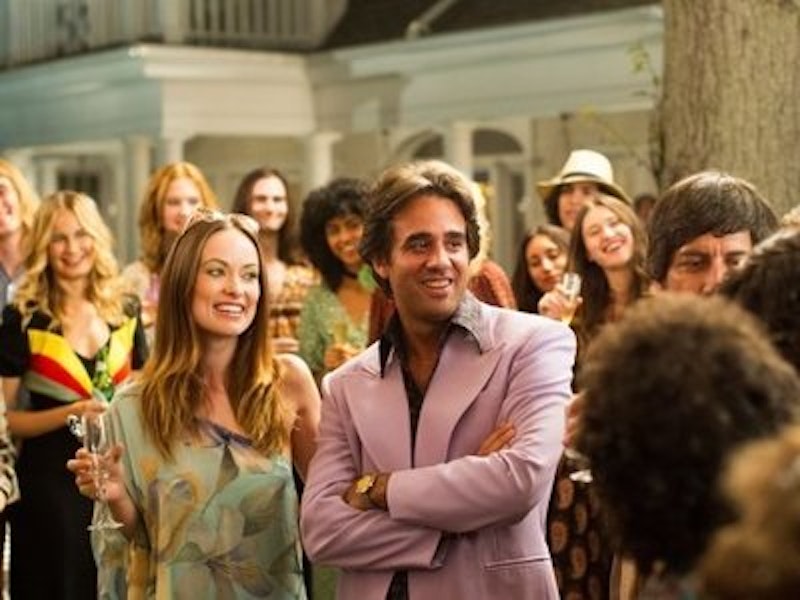 Andrew Dice Clay is really quite good. He plays a radio station mogul who makes the other characters in Vinyl look classy and restrained. Even when he’s talking, he’s bellowing. When he bellows outright, he overflows like a volcano. When he overflows (or detonates, or erupts), a vast roomful of Long Island 1970s decor seems to vibrate until it becomes murk. Reviewers have been blasé about the ex-comedian’s contribution to the show; “scenery chewing” is a phrase that comes up. I’m blasé too, but not because I found him hammy or unreal. He was convincing, as was a great deal else about HBO’s new series. But enough is enough, and we’ve had plenty of volcanic lowlifes on our screens. Vinyl trots out a familiar crew. Oh look, this one is getting his head banged in. That one is going back to cocaine.

Reviewing the show, ancient punk rocker Richard Hell instructs us that cocaine doesn’t really jerk people’s spines and pop their eyeballs. But it does when Martin Scorsese is directing. Apparently the drug has the same effect as the kind of editing Scorsese prefers. Cocaine operates the same way as a conversation between Scorsese characters who don’t see eye to eye: furniture leaves the ground, throat tendons emboss themselves. There’s a lot of that in Vinyl. I didn’t find it unconvincing, just redundant.

What’s really good about Vinyl? Sets, costumes, the arrangement and behavior of extras. Elements of the mise-en-scène, as we say in France. You may want to see New York City in 1973. I did, and when I watched Vinyl I got what I wanted. For one thing, the scenes feel like confirmation of what anybody who leafs through rock books has always suspected: the people in the photographs looked like idiots. The costumes people put on for a show or even the office, the feathers and floppy hats and rambunctious lapels, were bedraggled and forlorn. Trapped between the muttonchops were the usual dumb schmuck faces we all have to live with. That feels real to me. I had trouble looking away just because I felt like I was there, and that’s one of the best feelings a movie or TV drama can give you.

On the other hand, the script suffers from a bad case of wanders and the story is centered around the dullest aspect of the era it covers. The early- to mid-1970s was many interesting things, but it was also the period when aging young men began to moon over rock music and its lost destiny. Wealthy Britons released product with “rock” or, worse, “rock and roll” in the title (“Long Live Rock,” “Rock and Roll,” “It’s Only Rock and Roll,” “Rock ‘n’ Roll”). Witless fans were hectored about their indifference toward the rootsy black blues men who never made a ton or banged groupies. Fellows with typewriters and saggy jeans hammered out pieces explaining why joyous adolescent noise (and similar phrases) was so good and how now it was all gone. Maybe bubblegum was the answer, said some daring souls. Maybe more pythons and spangled ladders for the stage shows. Maybe listening attentively to the fly-in-a-matchbox sound produced by Robert Johnson recordings. Maybe enduring the assault of toothless, spavined yobs who kept their solos short and jagged. Turned out that last one did the trick, at least for a while.

Vinyl’s hero (Bobby Cannavale, and he’s fine) has been designed as a man of his era. The boss of American Century Records sold out a rootsy black blues man to get where he is. But he’s not going to stay there unless he gets hip to a boss new sound, and we all know what that is. His company’s sandwich girl and drug runner (Juno Temple) discovers a group of Brit proto-punks called the Nasty Bits. Apparently something will come of this. Meanwhile, the boss’ wife (Olivia Wilde) acts like a wife on a TV show: she looks after the kids and scolds him about getting swacked. The boss’ sidemen (Ray Romano and P.J. Byrne, both funny) drip sleaze from their sideburns.

Eventually everybody will find their way to the true sound, the righteous noise of revivified rock. In effect this means that you, the viewer, have to keep reminding yourself of how great Joe Strummer and Mick Jones would be in the late-70s and early-80s. That’s the recipe for enjoying Vinyl: look at the costumes, ignore the dialogue, and think of the Clash.