Dirk Bogarde reached new heights as an actor in Joseph Losey's The Servant (1963). 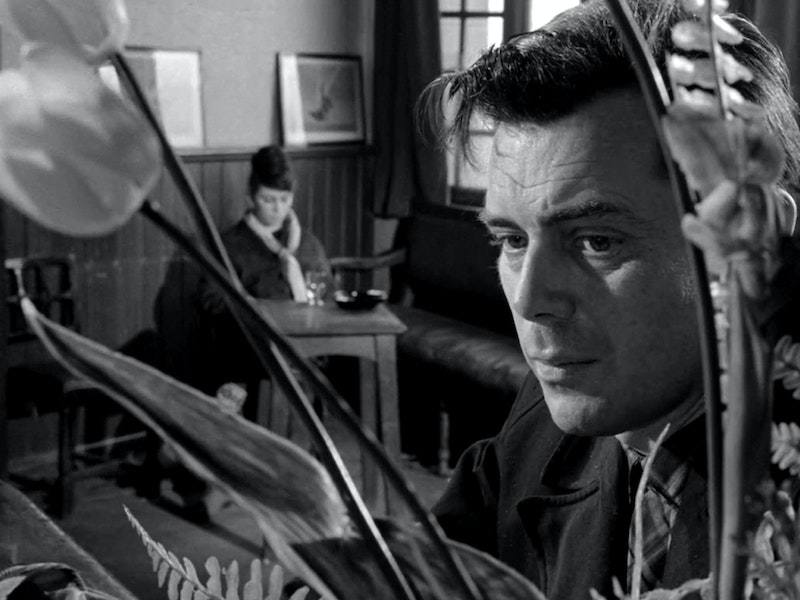 Joseph Losey’s The Servant (1963) begins innocently enough. A middle-aged man by the name of Hugo Barrett (Dirk Bogarde) takes up a post as a manservant for the wealth and appearance-obsessed younger man, Tony (James Fox). Barrett seems a perfect butler, navigating through the British class system well. Like any butler, he hides his real self to be of complete service to his master. Such relationships in British literature and film have been generally treated as a matter-of-fact reality (E.M. Forster’s Howards End and Kazuo Ishiguro’s Remains of the Day are some of the most obvious examples), while exploring the subtle undertones of British societal divide.

The Servant, based on Robin Maugham’s 1948 novella, is an outlier in this genre. This isn’t a humorous story of Jeeves and Wooster but of a complete psychological breakdown of Tony and Barrett. It’s a story in which the lines between the master and servant are not only blurred but outright negated and morphed into bizarre and sketchy relationship.

Almost immediately, Barrett becomes possessive of Tony. The interloper of the relationship that Barrett is trying to change and save is Tony’s love interest, Susan Stewart (Wendy Craig), who immediately expresses disinterest and disdain for Barrett. She practically laughs at Barrett’s little idiosyncrasies that go with being a manservant: white gloves, wine pouring, and distant chit-chat between master and servant. Susan is resisting this high-class society, despite the fact that she belongs to it as well. She finds it laughable that Tony would seek out such a “companion.” In many ways, this is reflective of British attitudes toward the aesthetics of class structure, which was already disappearing after World War II, let alone during the 1960s.

Barrett oscillates between a butler who dotes on his master’s every need and a man who’s concocting some kind of scheme, whose specific details are yet to be revealed. As if taking over the house, he decided to bring in Vera (Sarah Miles), whom he introduces as his sister (this turns out to be untrue especially given the fact that Barrett and Vera engage in a sexual relationship).

As Barrett’s power and ascent grows, Tony’s weakness and descent begins as well. After Vera seduces Tony, and after it’s revealed that she is Barrett’s fiancé, they’re both ordered to leave (although the veracity of Barret’s and Vera’s engagement is called into question since Barrett can’t be trusted). It would appear that Tony is asserting his authority in this case. Perhaps this is the end of these toxic relationships. But after Barrett leaves, Tony’s lost. Instead of embracing the freedom from strangeness of his relationship with him, he masochistically wants it back. His pathetic wish comes true when he runs into Barrett in a pub and, after some inauthentic sob story told by Barrett, Tony invites him back into his house.

It’s at this point that their relationship takes an even stranger turn. They’re living like two men companions (whether this is supposed to be a thinly-veiled commentary on homosexuality in Britain at the time is, at least for me, open to discussion), who bicker about the state of the house and what a pigsty it is. Like a nagging wife, Barrett complains that he has to do everything around the house, but then they seem to metaphorically “kiss and make up,” as Tony comments on the stew that Barrett made. He insists that it’s delicious, while Barrett demurely says that it’s slightly salty. If things were weird and uneasy before, then they’re stranger now. Who are these two men and why are they stuck on and with each other?

Occasionally, Susan tries to penetrate the fortress that Barrett’s sadism and Tony’s masochism have built but she’s unwanted. The disdain that Barrett and Susan have for each other is visceral, often emerging in terms of misogyny and misandry. But ultimately, it’s the jealousy that Susan is possessed with, and which brings her entirely down. She’s too tired to fight. Barrett’s in full possession of Tony. As a final goodbye, Susan manages enough strength to physically strike Barrett. Bogarde’s expression is sublime in its powerlessness, meekness, and sudden submission. But he remains victorious, even in that moment of seeming defeat.

Barrett and Tony take on the roles of the master and servant interchangeably but throughout this entire, bizarre ontological dance, it’s clear that Barrett is always in control. Bogarde’s Barrett is not an insane maniac but a man who won’t allowed to be subdued. He’s fighting the class system even as he is being part of it. Bogarde’s acting range of emotion is astounding. One moment, he is a servant who cowers and speaks softly, and then, in another room and another space, he’s a self-important, careless, and undignified member of another class.

The black and white cinematography, as well as its use of the distorted mirrors and anxiety-inducing staircases, adds to the toxicity of the relationship between Barrett and Tony. There’s a sense of claustrophobia precisely because Barrett and Tony are isolated from the rest of the world. They are the makers and sufferers of their own drama, and Harold Pinter’s crisp dialogue moves the action swiftly through the waters of descent and ascent.

Even Barrett’s losing a sense of self-composure yet his personality always towers over Tony, as if he’s finding existential failures in Tony. After all, Tony is a pretender, a man who affectedly and aesthetically wants to be part of the upper class, and it’s Barrett who shows him the absurdity of his inauthentic existence. The end culminates in Tony’s absolute stupor, induced by alcohol and a constant supply of prostitutes. He’s unable to be in control of himself and lacks any kind of dignity.

As Barrett shows Susan out and ascends upon the stairs, Tony’s face is half-illuminated behind the balusters. He’s imprisoned in a world that’s as unreal as the one he tried to create aesthetically. In the final analysis, both Barrett and Tony are holding onto the existence that simply doesn’t function outside of the claustrophobic and toxic environment they are in. They remain in the dark womb of existential poison, of perverse comfort that only exists in the relationship between master and servant.