The Criterion Collection reissues the classic. 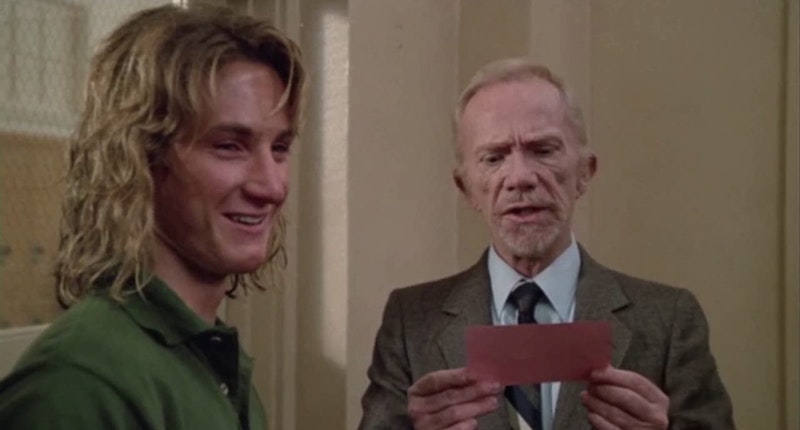 That’s the line Sean Penn delivered to Ray Walston in 1982’s classic Fast Times at Ridgemont High. Penn was playing Jeff Spicoli, a surfer and stoner, and Walston Mr. Hand, a tight-assed history teacher. The two clash when Spicoli’s late for class. Mr. Hand sends him to the principal, and Spicoli reacts by calling Mr. Hand a “dick.”

Not in the final film is Penn’s effort to get Walston truly riled up and add some genuine tension to the scene. As the camera panned over to Walston, Penn dropped the bomb about Hand being a red-faced MF’er. Walston wasn’t pleased.

That’s one of the bits of trivia found on the new Criterion Collection edition of Fast Times at Ridgemont High. It’s one of the best teen movies of the 1980s and deserves inclusion in the highbrow Criterion Collection. The film’s success and continued relevance is mostly due to director Amy Heckerling. Although the movie is based on the book by Cameron Crowe, it was Heckerling who fought the studio to capture the tone and stye of the film. Heckerling suggested Fast Times be set mostly in a mall. She refused to put any adults in the film. She rejected bland conventional choices for music, insisting the Go-Gos “We Got the Beat” open the film, a perfect choice.

With Heckerling at the helm, Fast Times was going to authentically capture teen life. In the early-1980s this meant kids having a lot of adult concerns and responsibilities. During filming the studio, Universal, sent out memos saying that Fast Times was going to be a disaster. They were hoping it would be overshadowed by the other film shooting at the same time, The Best Little Whorehouse in Texas. A guard at Universal didn’t recognize Crowe, telling him to be careful not to park in Burt Reynolds’ spot.

Fast Times was a huge hit and a cultural touchstone. The film, unlike anything else at the time, reflected the truth. In the audio commentary, Heckerling observes that the teens in the movie were like “little adults.” She notes that while the kids struggle with issues like sex, abortion and drugs, most of them also have jobs. About half the scenes take place with characters at work, and the closing credits show the places where they all have jobs shutting down for the night—a tone Heckerling says was inspired by Mean Streets.

What gives Fast Times its energy, even decades later, is that the characters are young but negotiating a grown-up world. “It’s about sex when you don’t know what you’re doing yet, and work when you don’t know what you’re doing yet,” Heckerling says. The characters are uneasy adolescents, wanting and not succeeding in sounding like experts about everything. The cast is outstanding, and many went on to become huge stars: Penn, Jennifer Jason Leigh, Judge Reinhold, Forest Whitaker, Phoebe Cates and Nicolas Cage. One big surprise: Jennifer Jason Leigh, who plays the innocent Stacy Hamilton, pushed harder than anyone for the film to contain explicit sex and earn an X rating.

Heckerling claims that Fast Times has more in common with I am Curious (Yellow), Easy Rider and other challenging experimental films of the 1960s and 70s than, say, Back to the Future. She’s partly right. Although Fast Times is remembered for its edgy themes, not to mention Phoebe Cates coming out of a pool in a bikini, viewed today the lessons of the film seem conservative, even heartwarming. It doesn’t have the cynicism of Risky Business or the nihilism of River’s Edge. Especially in light of today’s woke guidelines strangling filmmaking, Fast Times represents a genuinely free vision—and also, ultimately, a decent one. Jennifer Jason Leigh’s character wants to lose her virginity and picks the wrong guy to do it with, but in the end chooses to be with the nice guy who wouldn’t sleep with her but genuinely loves her.

Audiences still delight in the battles between Spicoli and Mr. Hand, forgetting the heart and even tenderness of the final scenes between the two, when Mr. Hand comes to Spicoli’s house to give a final exam and let the stoner know that yes, he’ll graduate on time. Unlike the wretched and narcissistic St. Elmo’s Fire, which would come out several years later, these are likable kids. Heckerling is right in pointing out that Fast Times has a lot of 1960s and 1970s revolutionary Hollywood in it, but in important ways it reflects the ethos of a man who was an important figure in the 1980s and whose name comes under some criticism in the film's commentary track—Ronald Reagan.