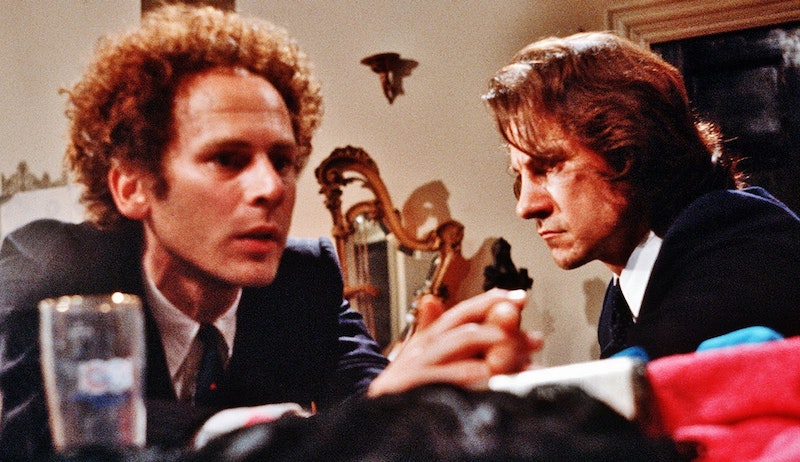 It’s the middle of the night in Vienna at some point circa 1980, and an ambulance takes a critically wounded woman to a hospital. As doctors try to save her life, her lover, an older man, relives memories of their relationship. And a dogged Viennese inspector tries to understand exactly what happened before the ambulance arrived: is this a failed suicide, or an attempted murder?

That’s the start of Nicolas Roeg’s Bad Timing. Released in 1980 (and sometimes known as A Sensual Obsession), it stars Theresa Russell as young wild-hearted Milena Flaherty, Art Garfunkel as reserved psychoanalyst and professor Alex Linden, and Harvey Keitel as Inspector Netusil. It’s streaming on the Criterion Channel as part of their films about psychology, and it’s one of their more interesting selections—ambitious formally and thematically, it wrong-foots the viewer. It hints at complexities that don’t exist in the actual plot, as a way to insist on the complexity of character.

Netusil’s investigation in the present is a subplot that contrasts with Alex’s memories of his past with Milena. It’s an effective structure, though occasionally jarring: Alex’s recollections unfurl in a roughly chronological sequence, from his meeting Milena through the rise and fall of their relationship to their final night, except that occasionally Roeg inserts moments out of sequence. If that’s an attempt to replicate a true stream of consciousness, it fails: the movie’s fundamentally linear, not a jigsaw.

But it works nevertheless. Partly because the performances keep things coherent: Keitel’s surprisingly convincing as an Austrian police inspector, while Russell gives herself wholeheartedly to the role of Milena. If her performance makes the movie, Garfunkel’s Alex is more ambiguous. The point of the character is that he’s reserved, so it’s difficult to criticize Garfunkel for underplaying. But there’s little chemistry in their interaction.

Casting a rock star as an alienated, isolated character is something of a Roeg hallmark (Jagger in Performance, Bowie in The Man Who Fell to Earth) and you can see some of his other themes in this movie as well: altered states, tragedy and manic love, foreigners navigating an old European city. And graphic sex—the movie was rated X, and somebody in its own distribution company described it as “a film made by sick people for sick people.”

It isn’t, really, though it is a film that consistently doesn’t do what you’d expect. At its heart, it’s a story about two people drawn to each other, battling each other for control of their relationship, and then unable to accept winning. But it’s also filled with red herrings, ominous hints of espionage plots that turn out to be artifacts of paranoia.

This works because paranoia is a major theme of the film, a defining aspect of Alex and Milena’s relationship. Setting the story in Vienna, so close to the Iron Curtain, gives that paranoia another dimension. This is a Cold War film, in a way that might be difficult for younger viewers to grasp. Politics and espionage are subtext that Roeg carefully keeps from boiling over into text.

Instead the Cold War becomes a reflection of Alex. He’s a psychoanalyst and professor, and at one point we see him delivering a lecture about secrets and spying. “The guilt-ridden voyeur is usually a political conservative,” he declares, and there’s irony there. Partly because we see him working with the United States military to create a psychological profile of a man who turns out to be Milena’s husband. But mainly because the point of the film is that Alex is a controlling, manipulative personality, who can never monitor Milena closely enough to satisfy himself.

Alex isn’t necessarily a political conservative, except perhaps in the sense of having a patriarchal desire to control the woman who attracts him. But he’d conservative by nature, buttoned-down and orderly; the film makes a great point of contrasting the neat precision of his apartment, with its muted color scheme, to Milena’s messy and colorful home. Almost twice Milena’s age, Alex is psychologically abusive and fearful of her freedom. She can never give him enough assurance that she loves him and is faithful to him.

So Alex’s lecture on spying becomes an important part of the film and of his character development. We don’t see him analyzing a patient, but his ideas about human psychology inform the film. The movie’s about relating to the other, about fear and dominance, and Roeg’s thoughtful enough to understand that he’s dealing with mental processes.

There’s a depth of reference in the film to match the complexity of its ideas. The opening credits play out over Alex and Milena separately looking at Klimt’s paintings in a museum. This nods to Vienna’s history as the cradle of modernism, and also establishes visual motifs later echoed in Milena’s clothing; she’s a work of art that is perhaps beyond analysis. Alex reads Blake on the lineaments of gratified desire but doesn’t seem to understand it. Most bluntly, he and Milena, touring Freud’s home, make out on Freud’s analytic couch, under the gaze of his photograph.

Again: an observer and a psychoanalyst, in Vienna the birthplace of psychoanalysis. Alex wants to understand the mind in order to control it. By the end of the movie this fails, catastrophically, just as his attempts to control Milena push her away. The title of the movie is a glance at the limits of what can be controlled. Human will and personality can make many things inevitable, but there’s no way around Bad Timing.