Who is the truest Jack Kirby aubergine avatar? 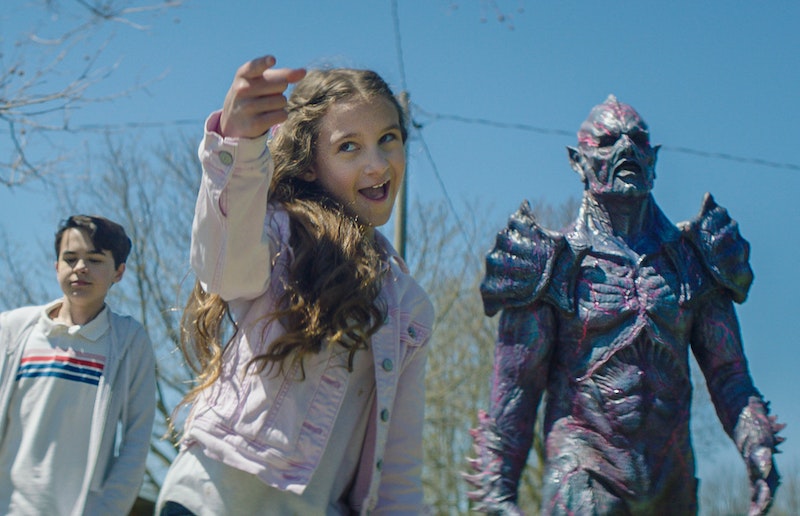 The 2020 Canadian film PG: Psycho Goreman, out now on Shudder, bills itself as a comedy/horror. The promotional material says that director Steven Kostanski is indebted to 1980s low-budget schlockfests like Monster Squad. But watching the movie not long after seeing the endless Snyder cut of Justice League, it was hard to look on the fearsome mauve rubber suited titular galactic conqueror and not think of that other mauve CGI galactic conqueror in the big-budget superhero slugfest. With a backstory of distant slave planets and godlike beings bashing each other across titanic battlefields, Psycho Goreman has superhero illustrator and cosmic genius Jack Kirby’s imagination crackling all over it.

Current superhero films try to capture Kirby’s Giant Epic Sweep. Psycho Goreman takes a more parodic approach. Two young kids, weird bossy Mimi (Nita-Josee Hanna) and her long-suffering brother Luke (Owen Myre) accidentally uncover the storage coffin of a ranting eggplant-colored intergalactic terror called the Arch-Duke of Nightmares (Matthew Ninaber, with gravelly voice provided by Steven Vlahos). Arch-Duke sets about destroying all life in the universe, but Mimi has picked up the mystical gem he must obey. She names him “Psycho Goreman” (“PG” for short) and has him watch TV and go clothes shopping with her, much to his frustration. Meanwhile, the also evil Templars, who imprisoned PG in his box, realize that he has escaped. So Pandora (Kristen MacCulloch), the boss Templar, reduces a human to a bloody spot in order to wear said body as a skin suit and track Goreman across earth.

Kirby’s creations—the Silver Surfer! Galactus! Big Barda! The Newsboy Legion!—are goofily bombastic, but he rarely winks to indicate he’s in on the joke. Psycho Goreman in contrast is tongue-in-cheek all the time. PG turns one of Mimi’s friends into a brain-shaped blob with tentacles and sad eyes; when he mournfully asks Mimi if he’ll ever be changed back, she tells him, “no,” before kissing his pulsing pink head/body/whatever. When PG challenges Pandora to a final climactic battle of Crazy Ball (basically dodgeball, but with lots of extra, complicated rules), the movie is evoking Bill and Ted, not Stan and Jack.

Psycho Goreman’s low-brow humor and gross out effects aren’t very Kirby-esque. But in other ways it seems very much in the spirit of the King. Kirby was all about gigantic creativity; his art was filled with weird machines; magic organic boxes; people wearing funny horns and gods of death on skis. Nothing is quite as un-Kirby-like as telling stories Kirby already told using characters he already created.

Psycho Goreman, despite (or because of) its silliness, truly grasps the Kirby aesthetic of having 12 different weird ideas before you eat wriggling blue worms for breakfast. Psycho Goreman turns basketballs into flaming skulls which he throws through walls; he creates pools of evil darkness from which hideous hands reach out and tear his enemies’ faces’ off; he builds a bloody sword out of torn internal gobbets of his antagonists. And those antagonists are a conglomerate of bizarre pulp tropes that would make Kirby throw bunches of exclamation points on the fire.

There’s a robot that spews blood from multiple nozzle; cyborg Valkyries; warty refugees from the Tatooine cantina cooling themselves with hand-held fans. You can see the ideas pulsing before they pull themselves off the sketch pad and onto the make-up table, in all their flamboyant fleshiness.

These days Kirby’s ideas are the odd, misshapen building blocks of popular culture, from Captain America to Hulk to X-Men to decades-old Kirby knock-offs like Thanos. But Kirby’s greatest brainchild is the idea that you can have odd, misshapen brainchildren of your own. PG snickers and farts and refuses to take galactic conflict seriously. But it believes in the joy of creativity in a way that Kirby’s more earnest successors don’t. That is why today Darkseid must kneel before Psycho Goreman!