Through the Eyes of Jigsaw

Spiral: From the Book of Saw starts with a fine first hour, then dissolves with a twist ending that comes much too fast. B- 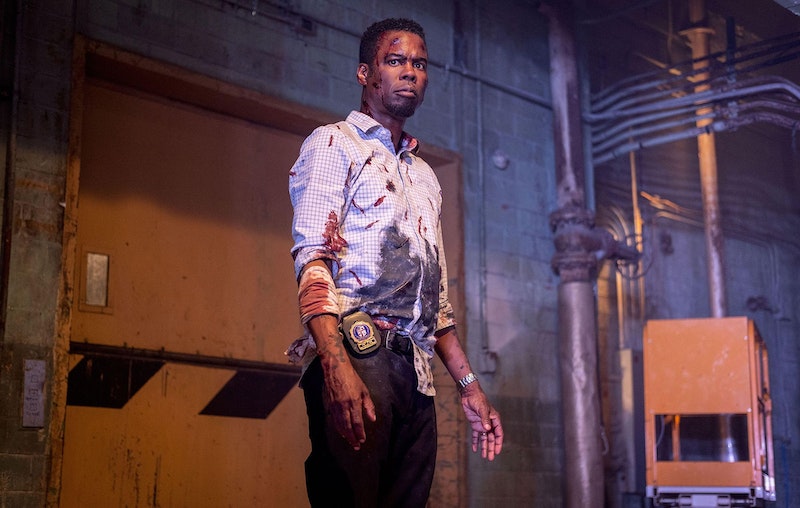 Spiral: From the Book of Saw is spawned from an intriguing idea: What if the Jigsaw Killer from the Saw movies was stalking the margins of a Serpico-style urban police corruption thriller? And what if the Saw movies, which always had few recognizable stars in them, starred Chris Rock and Samuel L. Jackson?

A promising first hour is somewhat squandered by an ending that's both needlessly twisty and abrupt.

The original Saw series featured seven films, released between 2004 and 2010. Created by James Wan and Leigh Whannell, both of whom have gone on to make fine films, the Saw movies were known for their introduction of the Jigsaw killer. That villain put victims in elaborate traps, gave them moral tests, and tortured and killed them in particularly gory ways, even by the standards of the horror genre.

An unsuccessful reboot called Jigsaw followed in 2017, and now there's Spiral, which reportedly came about when Chris Rock approached studio executives about reviving the franchise with himself as the lead actor and executive producer. Darren Lynn Bousman, director of the second, third and fourth Saw films, returns to the director’s chair.

Rock stars as Zeke, a homicide detective in an unnamed big city. Rock's character is introduced cracking jokes that sound suspiciously like Chris Rock standup routines, and we later learn he's going through a divorce, as Rock himself recently did. 48 Hrs., it would appear, is a heavy influence, at least on the film's first third, before the periodic murders begin and the comedy disappears.

Eventually, we get a heap of backstory: Zeke’s the son of a famous and respected former police commissioner (Samuel L. Jackson.) Years earlier, Zeke turned in his corrupt and murderous partner, leading him to catch a bullet, and for all the other cops to distrust him to this day. Enter what appears to be a copycat of the original Jigsaw killer, who seems to know all about everyone, and carries out a series of particularly grisly cop murders. We're supposed to guess, based on process of elimination, who's responsible. It leads up to a shocking twist, and then another, and then the movie just ends. The finale is where Spiral really steps wrongly: It raises thorny questions about morality and police corruption but raises them too late.

Spiral completed filming in late-2019, prior to the pandemic and the George Floyd protests, which would appear to give the corruption plot more gravitas than what was originally intended. But the film fumbles that, especially in not bringing race into consideration until the last possible second. Rock’s decent in the film, having taken a turn towards more dramatic acting of late, between this film and the most recent Fargo season. Jackson has some fun playing a cop elder statesman, while Max Minghella is a welcome presence as Rock's young partner. Marisol Nichols has some good scenes as Rock’s boss.