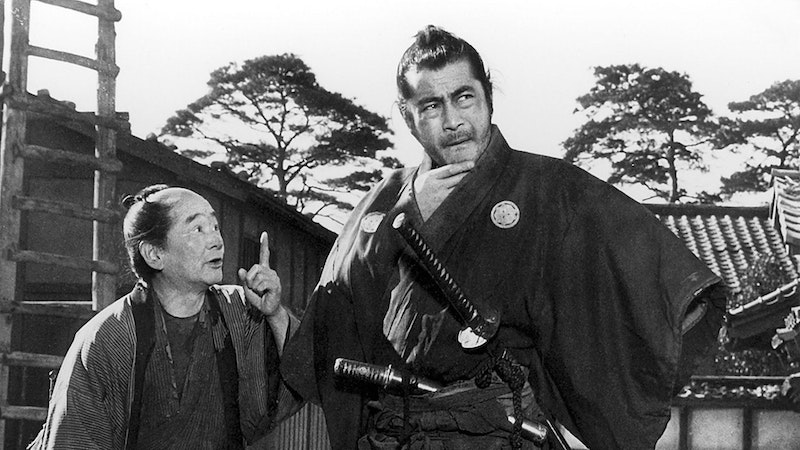 One of the more memorable recurring sketches in the early years of Saturday Night Live involved John Belushi's portrayal of a samurai living in modern day America and working at various jobs involving contact with the public. As the proprietor of a deli, he cut the corned beef with his Japanese sword. When Buck Henry, playing a customer, complained about the sandwich, Belushi's character threatened to disembowel himself in the samurai tradition. It was Belushi at his physical best, but few viewers realized that he was channeling the greatest actor Japan has ever produced, Toshiro Mifune. The actor's impact, built around the tragic hero narrative cinema (unlike the more positive personas that John Wayne, James Stewart, and Gary Cooper projected in Hollywood) extended way beyond Japan's borders.

Mifune, born on April 1, 1920, belongs in the category of history's greatest. His 16-film partnership with Akira Kurosawa formed what's probably the greatest actor/director team in cinematic history. The Japanese auteur said he couldn’t have made those films without Mifune. Outside of Japan, Clint Eastwood's performance in A Fistful of Dollars wouldn't have happened without Mifune's performance in Yojimbo, one of his finest collaborations with Kurosawa. Mifune's magnetic, masculine screen presence set the tone for many male movie stars who'd follow in his footsteps, including Steve McQueen, Charles Bronson, Bruce Willis, and Harrison Ford. In 'Rashomon, Yojimbo, Sanjuro, and Seven Samurai, Mifune's complex, scruffy ronin (masterless samurai) became the chief archetypes for decades worth of screen heroes and anti-heroes in Japan, Hollywood, and the rest of the cinema world.

Kurosawa and Mifune had a symbiosis that put an indelible stamp on all of their collaborations. Together they created templates that reverberated throughout global culture. This cinematic pairing preceded such future matchups as Alfred Hitchcock and Jimmy Stewart, Martin Scorsese and Robert DeNiro, and Spike Lee and Denzel Washington. There's a Kurosawa quote about his favorite actor's preternatural abilities: "Mifune had a kind of talent that I've never encountered before in the Japanese film world. It was above all the speed at which he expressed himself that was astounding. The ordinary Japanese actor needs ten feet of film to get across an impression. Mifune needed only three." Close-ups of the actor’s face reveal so much. In a matter of seconds it could go from bemusement to intimidation, from innocent grin to an eruption of anger. And he'd make it look natural.

One standout example of this ability to convey disparate emotions economically appears in 1954’s Samurai I, Musashi Miyamoto, directed by Hiroshi lnagaki, who Mifune actually made more films with than Kurosawa. The actor plays a fugitive captured by a monk who ties him up and hoists him up on a tree branch. Nevertheless, Mifune's character still maintains his tough-guy persona, even after a girl discovers him and cuts him down. But when he sees the rope burns on her hands, the actor transforms instantly and tears of pity form in his eyes.

In I Live In Fear, the 36-year-old Mifune made himself into a 65-year-old man, and even if you're familiar with the actor it might take you some time to realize that it's him.

Many Americans were introduced to the actor through the 1980 TV series Shogun, in which he played Lord Yoshi Toranaga. While the actor impressed viewers with his screen presence, few knew that he'd been Japan's biggest star since shortly after his first film in 1947. Mifune went on to make his biggest impact in the chanbara genre—period pieces set in feudal Japan with wandering swordsmen fighting each other over matters of honor. Those films, especially the ones Kurosawa directed, were influenced by westerns, and they in turn influenced westerns.

Mifune's shadow presence exists in many American movies made over the past six or seven decades. Male movie stars working in a variety of genres have borrowed from his diverse acting toolkit, including action, comedy, sci-fi fantasy, and crime. For someone so closely associated with the samurai genre and the action hero archetype, the comic element is a big part of Mifune's acting contributions. In addition to Belushi, Jim Carrey, Robin Williams, and other physical comedy actors also owe a debt to him. In fact, the comic aspect the galvanic performer added to epic films like Seven Samurai which rank high in the cinematic pantheon of "important" films adds some fun to them that leavens their intensity and improves the viewing experience.

You might say that Mifune was Clint Eastwood before Clint Eastwood was. But that was only when he wanted to be, because he could project fiery animalistic expressiveness just as easily as stoic strength. His versatility was extraordinary, which nobody's ever said of Eastwood. Mifune played a dead serious role in Throne of Blood, and a mostly comedic role in Seven Samurai. Like Eastwood, Mifune could’ve made an entire career of recreating the same laconic anti-hero, but his talent allowed him to apply nuance to each new role.

When Kurosawa realized that he couldn’t control the force of nature that Mifune was, he stopped giving him acting advice. The result was a remarkable body of work that even the great director himself couldn't have imagined. Many of their films can be found on the Criterion Channel.