Satanic Panic in the Parking Lot

We Summon the Darkness is the latest in a run of 1980s goth "satanic panic" movies runs thin quick. B- 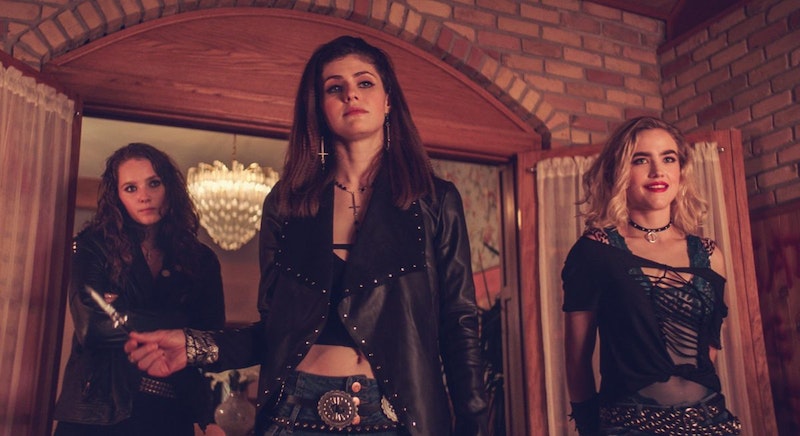 We Summon the Darkness is the latest in a series of contemporary horror movies to riff on the "satanic panic" of the 1980s, when the media pushed a moral panic that "satanic ritual abuse" was rampant, while also using heavy metal music as a front. One of the earlier such movies, from last year, was actually called Satanic Panic. This one isn't quite up to that level, but it's done everything right when it comes to period detail—and it's also got some surprises.

The film, directed by Marc Meyers, debuted last year at Fantastic Fest and comes out this week on VOD and digital. Set in the late-1980s, the film focuses on a trio of young woman (Alexandria Daddario, Maddie Hasson and Amy Forsyth) who are headed to a heavy metal show. On the way they meet three dudes (Logan Miller, Austin Swift and Keean Johnson), and the six of them head to an after party in a huge mansion.

With hints dropped throughout of a nearby string of murders that are associated with satanic ritual abuse, we get the sense that's the way things are going. About a third of the way through the movie comes a twist, one that's both clever and surprising.

The problem is that the twist comes 30 minutes into the 90-minute running time, and what ensues in the remaining hour is a much less interesting movie, which is merely the different characters chasing each other around a large house trying to kill one another. There's also one character who inexplicably switches sides on multiple occasions.

It gets bloody and violent quickly, but it’s also repetitive. Another horror movie last year, Ready or Not, was also a violent cat-and-mouse thriller set in a mansion, but Ready or Not got a lot more creative with its staging.

Showing up briefly in the third act is Jackass veteran Johnny Knoxville, in an evil televangelist role that's not nearly as fun as it sounds. HBO's The Righteous Gemstones, which presumably aired after this movie finished filming, raised the bar when it comes to the portrayal of huckster evangelists.

The cast is one of the movie's strengths. Daddario, probably best known for her part on the first True Detective season, is a compelling lead, wearing 1980s-specific crimped hair. Hasson is another standout, playing a bleached blonde woman named Val, who reminds me of a lot of bleached blonde women I knew back in the 1980s and early-90s, some of whom were also named Val. Also promising in brief screen time is Austin Swift- Taylor's Swift's brother—who appears to have a bright future in the movies in dimwitted bro sidekick roles.

The movie, though, is vague about exactly how old the characters are. They seem like teenagers, or possibly slightly older, although Daddario is in her mid-30s and most of the other actors are in their mid-to-late 20s.

We Summon the Darkness isn't terrible, but it might’ve been better if it had found a way to spread the surprises out.