Troll Farm Across the Globe

Trolls World Tour is a fine but forgettable distraction. B- 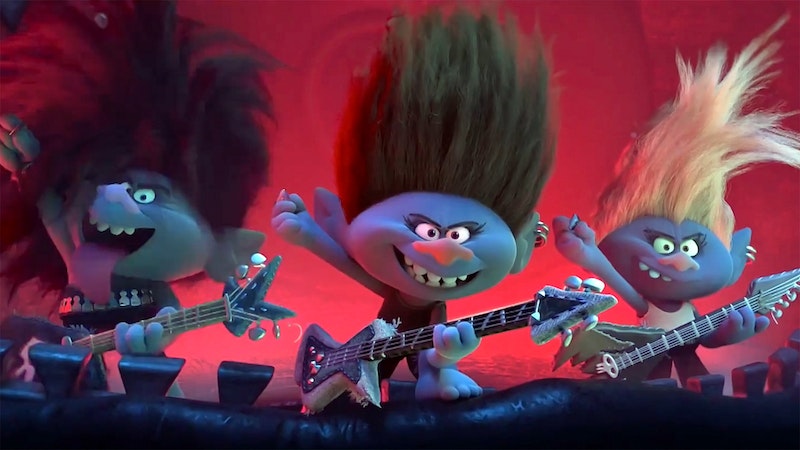 The sequel to Trolls, the hit DreamWorks Animation film from four years ago that was based on the popular toy line, is called Trolls World Tour, and not Trolls 2. This is likely to avoid confusion with Troll 2, the schlocky 1990 horror film that's become an ironic cult phenomenon, and the subject of the tribute documentary Best Worst Movie.

Trolls World Tour isn’t as bad as Troll 2, but it's not going to be nearly as memorable. It's likely to be remembered as the first major Hollywood studio film to have its planned release shifted entirely from theatrical to video on demand due to the coronavirus shutdowns. (“You might be fine living a world where everyone lives in isolation, but I am not," a character says at one point, to likely uneasy laughter of most adults watching.)

Trolls, which arrived in 2016, piggybacked on the popularity of The LEGO Movie three years earlier—it was an animated film, featuring brightly colored images and the voice talents of popular performers, led by Justin Timberlake and Anna Kendrick.

Trolls wasn't nearly as creatively successful as The LEGO Movie. But it was a decent-sized hit for DreamWorks—also featuring a hit original song, Timberlake's "Can't Stop the Feeling"—justifying a sequel.

The new movie, directed by Walt Dohrn and written by five credited screenwriters, largely follows the formula of the first, although the primary conceit of the plot is odd. As many critics pointed out when the first trailer appeared last year, Trolls World Tour has based its entire plot on an esoteric debate among music critics, circa 2004, about "rockism" vs. "poptimism."

In Trolls World Tour, the heroic trolls of the first movie (led by Kendrick's Poppy and Timberlake's Branch) are now known as the "pop trolls," and they learn that each of the surrounding kingdoms is associated with different musical genres. It turns out the rock trolls, led by Queen Barb (voiced by Crazy Ex-Girlfriend's great Rachel Bloom) are the villains, and that their plan is to collect the "magical strings" from the other tribes, put them all on one guitar, and thus destroy all other music.

The premise makes room for some colorful visual inventiveness, and also several musical numbers. This is a jukebox musical, featuring established songs, though most of the songs change the words so they're about trolls, a la "Trolls Just Wanna Have Fun."

There are some funny gags—Ozzy Osbourne voices "King Thrash," the rock queen's elderly father, while George Clinton is the Funk King. And while the cast also includes the likes of James Corden, Mary J. Blige, Kelly Clarkson, Sam Rockwell and many others, the film doesn't have nearly the time or inclination to give most of its dozens of characters much to do. And Jeffrey Tambor, the #MeToo'd actor who voiced Poppy's father in the first movie, has been replaced by Dohrn, the director.

Trolls World Tour is fine, but I don't expect to think about it ever again after this week. The story of whether its tenable to release theatrical films over VOD instead is much more interesting than anything that happens on screen. And it’s nowhere close to the level of Pixar’s Onward, in terms of 2020 animated films that had their at-home releases accelerated due to coronavirus.