Paul Verhoeven’s Black Book and the uneasy alliances that emerge amidst crisis. 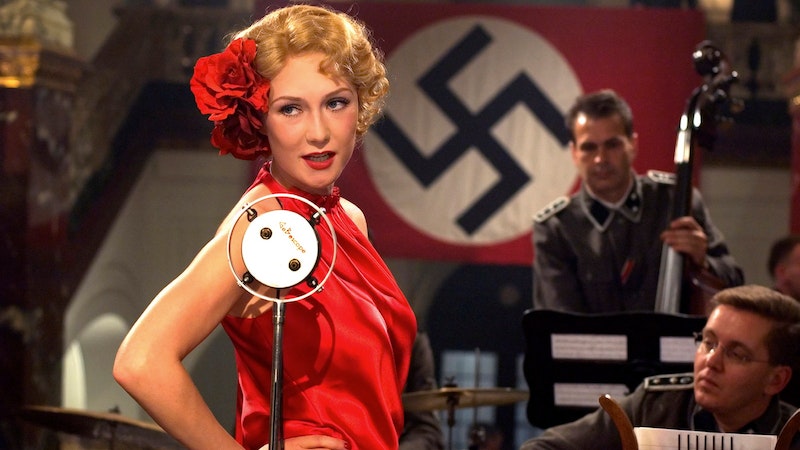 Stuck inside with plenty of movies on disc I haven’t gotten to yet, the year I keep coming back to is 2007. I went for Paul Verhoeven’s Black Book, the only film he made in the 2000s and his first back in Holland after two decades in Hollywood. World War II epics are evergreen, and 2007 was the furthest we’d get from 9/11 until the 2008 financial collapse, and the end of a brief period at the end of the Bush 43 administration that was more of a lull than a catastrophe. There was the Virginia Tech shooting, but that was (remarkably) the only major school shooting that occurred while Bush was in office. In 2007, it was obvious that the Internet would erase the print industry and radically transform the music industry, but who knew it would take until now for a magazine like Film Comment to cease publication? Wasn’t the, uh, writing on the wall in Y2K?

What no one saw coming was how the financial crisis would cleave the film industry in two: micro budget mumblecore at the bottom and spandex at the top. In an article that I’ve cited frequently and that’s practically been canonized, Jason Bailey outlined exactly how the financial crisis left us bereft and barren of so much exciting work that was in development or never started at all.

Later in the piece, John Waters says that he if ever made pillows for inspirational slogans written in needlepoint, the first one he’d make would say, “Don’t Go Backward.” So no wonder he hasn’t made a film in 2004. No wonder David Lynch was MIA until 2017 (and just a few months ago, casting for a new Showtime project starring Naomi Watts and Laura Dern that now we may never see. As far as stalled productions go, I’m bummed about Martin Scorsese losing financing for Killers of the Flower Moon, and even more disappointed that Paul Thomas Anderson’s 1970s Southern California high school comedy won’t shoot in the summer).

Verhoeven’s Black Book was a Dutch triumph in 2006, but it didn’t come out in the United States until 2007. Two years before Quentin Tarantino’s Inglourious Basterds, Verhoeven delivered a prescient spin on Jewish women in the war making do. Black Book is so much more complete than Tarantino’s cobbled together pseudo-epic, so clearly strung together and edited down from thousands and thousands of pages that went un-filmed. Imagine Inglourious Basterds if it was just the Shoshana character. This is Black Book, and Verhoeven’s heroine, Rachel aka Ellis de Vries (Carice van Houten), runs through the movie like Marlene Dietrich in the best WWII video game never made.

Black Book does play out like a video game, 146 minutes that feel long because it’s paced like a series of side quests and campaigns. Van Houten’s performance is phenomenal, and it elevates what otherwise might’ve been mere pulp. She goes through so much, screaming after the death of yet another loved one in hour two, “When will it ever end?” We see her live through the brutal murder of her family, lovers, friends, and comrades. Even after surviving the liberation, she’s framed as a traitor and imprisoned along with the other collaborators. In the most Verhoevenian sequence in the film, a bucket of wet prisoner shit is dumped on van Houten’s character Carrie-style. Other than that, Black Book holds back on a lot of the body horror and gore that defined Verhoeven’s turbo-charged Hollywood satires.

Black Book sits in a strange place in Verhoeven’s body of work: made six years after his Hollywood bomb Hollow Man, and a decade before his second comeback, 2016’s Elle. He has a new film finished and ready for release about heretical lesbian nuns—can we get an expedited option on that one? It’s not well-known in the United States, but in 2008 it was voted by the public in Holland as the best Dutch movie ever made. Black Book takes a comparatively under-explored side of the war: how occupied countries dealt with collaborators and the politics of those temporarily united by Nazi oppression. There are arguments about whether or not saving a group of Dutch prisoners would be better than saving a group of Jews. At the end, when Holland is liberated, collaborators are imprisoned and humiliated in public. Fascism begets fascism, as in post-Vichy France.

I’ve wished for years that film and television production companies would put a voluntary hold on all World War I & II stories. We don’t need them; they’re conflicts too distant to be relevant anymore. They’re binary battles of good and evil, unlike every other American war since. But the coronavirus pandemic is the most significant disaster in world history since World War II, and the kind of uncomfortable and risky solidarity depicted in Black Book is exactly what we see happening today: no one wants to get the virus. But some people think it’s exaggerated, that, “it’s just the flu.” Others haven’t left their homes in weeks. Others still now wash their keys with bleach and strip when they get back from the grocery store.

People haven’t had to “stick together” at such a scale since World War II. In such an atomized and individualistic society, what will the post-virus America look like? Probably a lot like Europe after the war: full of back-biting, betrayal, recriminations, revenge, and so much snitching. Get ready to see your neighbors taking notes on how often you leave your house and whether or not you’re wearing a mask. Get ready for questions and looks that ask, “Are you with us? Are you safe?”

Forget about war refugees, we’ll all be like the traumatized and occupied in Holland: finally free but eager to take up the fascist, punitive behavior of our tormentor. Governments will use this crisis to tighten control and consolidate power. Look at how the world reformed after World War II, how things realigned. Other than past pandemics, texts like these are the best indication of where we’re headed, and what our options might be in a year or two.