Too Much of the Everyday in The Umbrella Academy 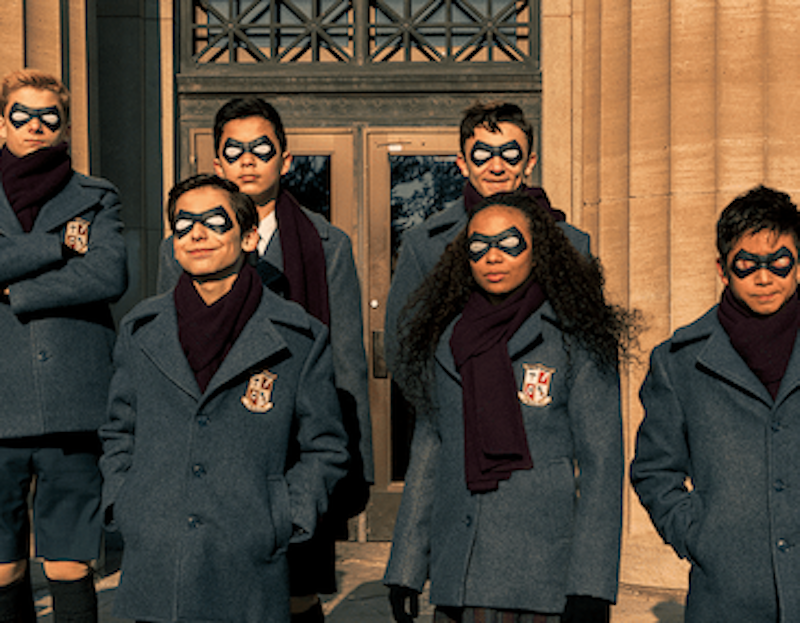 Among its other virtues, Netflix has become a reliable generator of genre television shows that catch whatever passes for the zeitgeist today. The first 10-episode season of The Umbrella Academy started streaming in February. A week later data analytics firm Parrot Analytics, which claims to track demand for streaming TV, announced that by their metrics the show was the most-watched American digital original program for the week, was in the top 0.03 percent of all shows, and was demonstrating increasing strength around the globe. That might explain why Netflix is (allegedly) already scouting locations for a second season, which is expected to be officially announced before too long. It doesn’t really answer the question: what is this show?

It’s a kind of superhero story, based on a comic series written by Gerard Way, former frontman of My Chemical Romance, and drawn by Gabriel Bá; it was adapted for TV by Steve Blackman and Jeremy Slater. Twenty-nine years ago, 43 women around the world gave birth at the same time, after instant and inexplicable pregnancies. Seven of those children were adopted by mysterious billionaire Sir Reginald Hargreeves (Colm Feore, demonstrating that he’s as tasteful and precise in overacting as in regular acting). All but one child developed strange powers. When Hargreeves dies, his children, now adults who have mostly scattered across the globe and beyond, reunite to mourn him. Unexpectedly, one of the kids, a time-traveller who vanished into the future years before, returns at that exact moment, bringing news that in eight days the world will end.

Nominally, the show’s about trying to stop the apocalypse. In fact, there isn’t much of a sense of urgency to it. At its best, the show’s engagingly off-kilter and unconcerned with plot in a way that’s unusual for superhero TV shows. Set pieces in the show are as likely to be dance numbers or displays of filmmaking technique as fight scenes. When The Umbrella Academy lets itself be weird, it’s involving. I didn’t find it got weird enough often enough. This isn’t David Lynch. There isn’t the thorough sense of a show informed by a specific idiosyncratic vision. There’s too much of the everyday here.

That’s an odd thing to say about a show with a talking chimp butler. Pogo, voiced by Adam Godley, is Hargreeves’ servant, given humanlike intelligence by Sir Reginald. But he mainly shows up to give exposition or move the plot forward. There’s a lack of interest in the oddity of Pogo, and in his individuality. This is less a function of plot-centred storytelling than of a failure of the imagination. This is a show in which one of the characters spends years on the moon, but we never understand whether Hargreeves alone has the technology to send him there or if this is a world with more advanced space travel in general.

To an extent, that’s fine. But after a point, a failure to envision the world undermines one’s ability to understand the characters. The guy who spent years on the moon is upset because he was there all alone. But he seems to have made it back to Earth easily enough when he needed to. So can other people go to the moon? Could he Skype? It’s fine to say that the point is he was on his own for a few years, but the series is so uninterested in the details of those years there’s a lack of any kind of telling detail to reinforce the individuality and idiosyncrasy of the character’s experience. Which tends to undercut the character.

A simpler example: the same character walks around in a big jacket, apparently supremely big and muscled. Soon enough, the jacket gets torn in a fight and we learn a bit more about what’s under his jacket—but we don’t really get what it means. Everybody in the family’s got weird abilities. What’s it supposed to matter that this one guy has changed a bit since any of the others have seen him?

One can multiply examples indefinitely—the family used to be known as a superhero group, and one son still runs around knifing criminals, but it’s unclear what the general population thinks of superheroes or if they’re supposed to be well-known. One member of the family wrote a book about her experience, which apparently flopped, but again it’s difficult to see how a memoir from the inside of a famous group could fail as badly as this book apparently did. The upshot is that the family dynamic falls apart because it’s difficult to understand who these characters are.

I’d argue that the character work fails as well because of a general sloppiness in the writing and execution. Dialogue is uninspired and tends to follow the needs of a scene rather than follow in emotionally coherent sequence. When the time-lost Number Five turns up with his message of the apocalypse, nobody is too surprised that a brother missing for 15 years happens to appear at the exact time and place the surviving members of the family have gathered to mourn for their father. One of the kids died in the past; nobody talks about him when the family gathers, which is strange. A key plot twist late in the series, about one character’s medication, feels like something all the characters should have suspected at some point in the last two decades of their lives. And the revelation of a betrayal in childhood says some unintended things about one of the characters; it’s one thing for a child to have done what they did, another to not talk about it for more than two decades after.

Perhaps as a result, the best moments tend to come from a duo of time-hopping assassins, Hazel and Cha-Cha, played respectively by Cameron Britton and Mary J. Blige. They’re an example of the show’s weirdness done right: employed by a mysterious cross-time agency, their camaraderie and their grousing about their jobs is perfectly relatable. When the show works, it gets at a very distinctive tone. Aidan Gallagher, who plays the Hargreeves child called Number Five, is another high point. He spends a lot of his time almost on his own, and his emotional landscape is more affecting when he’s in the company of a mannequin than when he’s with his family. Also worth noting is the work of Robert Sheehan as Klaus Hargreeves, who can see ghosts and is extravagantly bohemian; he wrings some fine moments out of bland dialogue.

This is what’s frustrating about the show: there are some wonderful moments in it. You can see how it could’ve worked. And it’s different enough that it’s not surprising that it appeals to a lot of people. But it’s toned down some of the strangeness of the comics—code names are almost entirely dispensed with, for example. (Oddly, one of the plot threads unique to the series is highly reminiscent of a classic story from the Chris Claremont X-Men comics; without wanting to tip off the plot too much, it’s also a little disappointing that the show traffics in the comics trope of a vastly powerful woman going mad and becoming a threat.)

Whether due to coincidence or some quirk of Netflix algorithms, there’s a weird similarity here to The Haunting of Hill House: a group of siblings return to a sprawling mansion where formative and terrible things happened in childhood; one has written a book; another has problems with substance abuse; another has died. This show is a different genre, but it’s also much less assured. Hill House knew how to use horror to do something distinctive. Umbrella Academy hasn’t figured out what to do with superheroes. It has wonderful pieces. I wish there were more of them, making a more coherent whole.