There's nothing about Triple Frontier that won't play at home. B+ 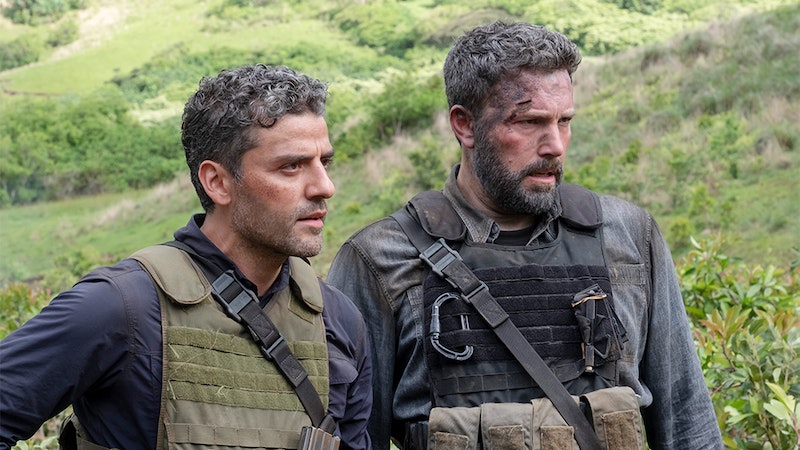 Triple Frontier is a relatively unconventional heist picture, both in structure and in execution, which is what I liked most about it. That, and an understated, wonderful performance by Ben Affleck. The film, on a brief theatrical run next week before heading to Netflix, is the story of a group of ex-special forces types (Oscar Isaac, Charlie Hunnam, Pedro Pascal, Garrett Hedlund, and Affleck) who, bored and unsatisfied with civilian life, attempt a risky heist of a drug lord in South America.

The plot is a touch of Three Kings, with bits of The Hurt Locker and Predator, minus the alien monster. The Hurt Locker part isn't coincidental, as that film's creative team of Kathryn Bigelow and Mark Boal was originally supposed to produce it (with Tom Hanks, inexplicably, starring), and Boal retains a co-writing credit.

There's a hint of a social conscience, in that these men gave years to military service and walked away without much money, to a life where they can barely make ends meet, while staying at home and missing the action. And the film's second half is an indictment of greed and hubris.

The ringleader (Isaac) has to talk the others into the job, starting with Affleck, a sad-sack middle-aged man who's introduced failing at his new career as a realtor, before drinking a beer while driving. It's Affleck's most interesting role in a while. What's unconventional is that while events certainly go sideways, it's not in the way they normally do in this sort of movie. The heist sequence is relatively early in the movie, and around the halfway point the stakes switch from "Will they carry out the robbery?" to "How, logistically, will they get these bags of money out of the country?"

Triple Frontier also has a similar plot to the fifth (and best) movie in the Fast and the Furious series, 2011's Fast Five. That one also involved a group of Americans robbing a South American crime lord, although in that movie the criminal conveniently kept all of his money in a giant, moveable vault that brought to mind Scrooge McDuck's money bin.

The film, likely purposely, is vague about geography, as well as about the exact length and difficulty of their journey through the mountains, jungle, and towards a waiting boat. (The "triple frontier" of the title is the area at the injunction of Paraguay, Argentina and Brazil.)

Triple Frontier was directed by J.C. Chandor, who previously teamed up with Isaac on the sublime 2014 crime drama A Most Violent Year. He also directed All Is Lost, the movie where Robert Redford was alone in a boat the entire time. He injects the film with some thrills, especially in the lengthy heist sequence, while adjusting it tonally, in its later parts, in a way that never loses the pace. As for the eternal Netflix dual-release question, there are some pretty vistas that will look handsome on the big screen, but there's nothing about Triple Frontier that won't play at home.