Forecasting the end of cinema through the sewers of early-year releases like Five Feet Apart and The Wedding Guest. 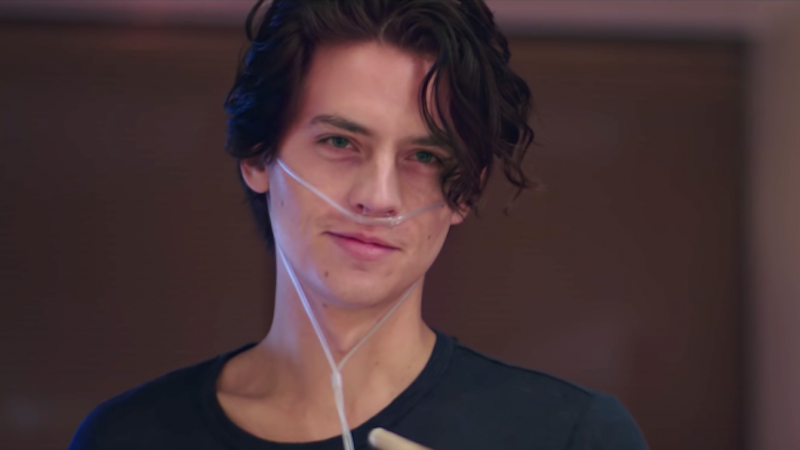 If I felt more venomous I’d leave my review of Five Feet Apart to my thoughts coming out of the theater (total fucking garbage), post it on Letterboxd, and move on. But this movie is bugging me, despite my initial disgust fading faster than I imagined. I’m no longer infuriated and feel no need to indulge in cruelty in order to write about Five Feet Apart. Its premise is appalling but competently executed, producing something disturbing and frightening: a love story between two teenage cystic fibrosis patients in a children’s hospital. This is not The Day Clown Cried, or even Patch Adams—the film feels assembled by algorithm, with stock shimmers and constant epiphany-core music cues that verge on absurdist. Five Feet Apart has the mis-en-scène of an Apple ad, and how odd how many iPhones, iPads, and Apple Watches appear on screen, their screens cradled by characters’ hands and superimposed next to pensive faces, showing a text conversation. The new phone call. A multi-billion dollar corporation shouldn’t be allowed to own a plot device.

Another day at the movies proved even more depressing, disinterest compounded by an unforgiving, almost psychedelic bout of food poisoning I’m still soldiering through. How did they put up with this shit hundreds of years ago? Black plague? Anyone? Seems extremely painful and not worth it. I wipe out after a bad bulgogi bowl. And I’m in a minor-to-medium depression thinking about the future of the cinema and if I’ll live to see movie theaters go extinct. Even in the last three years, the movies released in the doldrums between Christmas and early spring have gone from passable to bad to non-existent: streaming has made stocking-stuffer junk unnecessary, and theaters are happy to play Green Book or whatever won the most Oscars or Golden Globes for five months straight. Why stop? It brings people out, unlike The Wedding Guest, which I saw most of at a deserted matinee yesterday.

Dev Patel can’t play the heel, he’s a wack ass villain, and he’s a pretty shitty actor if you ask me. I can’t think of a single good performance this guy has given in his entire career. Anyway, when I saw the movie, the sound system was either partially off or dysfunctional, because the film’s soundtrack was off-kilter: only the speakers behind the silver screen were on, it was very quiet, and elements of the score and incidental sounds were missing (the same thing happened when I saw Stan & Ollie, but no one in the octogenarian audience noticed. Maybe they assumed they were the problem). Patel plays an asshole who kidnaps a woman in Pakistan, she develops Stockholm syndrome, he kills her secret lover and she escapes in the end—it’s a nothing movie, not ethically outrageous garbage like Five Feet Apart, just a wisp of material that doesn’t deserve the bytes it’s stored on.

It wasn’t a good weekend at the movies, and I haven’t had one all year. The only bright spots have been the Charles’ consistently great revival series (Wild Strawberries, Waiting Women, Sansho the Bailiff, When You Read This Letter off the top of my head) and Jean-Luc Godard’s The Image Book, which I saw three times and basically amounts to one of the most significant filmmakers in history coming to terms with the futility of his medium and his work near the end of his life. Cinema has changed nothing—if anything, it’s only made the world worse through distorted and outright false representation and elision. Moving image and sound aren’t going anywhere, but their venues are ghost towns now more than ever. I wonder if any of them will be there in a decade.