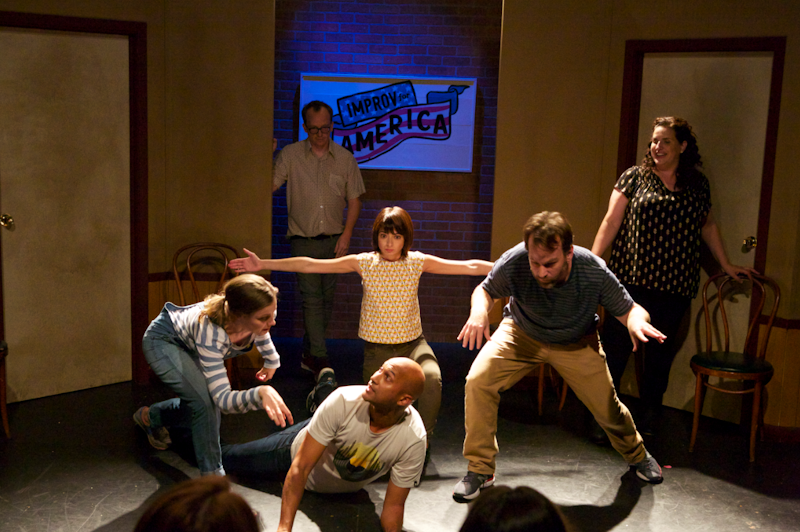 Don’t Think Twice could’ve been called While We’re Young, if Ben Stiller hadn’t taken that one. The movie’s about an improv troupe in their 30s, still the early half of their 30s but late enough for dreams to be dying. All except those of one guy (Keegan-Michael Key). He gets a ticket to the big time—Saturday Night Live, here called Weekend Live—and he and his friends must say goodbye.

Don’t Think Twice borrows its title from one of improv’s organizing principles. Possibly the title also says something about the characters’ career choice. Second thoughts are forced upon them when a dozen years of plugging along ends up with their failing to make the cut. They must ask whether they’re losers, and they have to smart over the small ways in which Key’s character, their old friend, ditches them or sells them out. In the end life choices get made, directions taken. Music plays beneath a shot of a newborn child, of a manuscript being dropped in the mail box (Kate Micucci’s graphic novel, finished at last).

Mike Birbiglia (writer, director, cast member) has given us a neatly-made film that’s lit like an ad for a good brunch place. To be condescending, Twice is the performance of a very good B student. I’ll note that when Key practices his Liam Neeson voice in the shower, the very well-composed soundtrack thrums underneath him—acoustic guitar, I think. Also, and this is painful to say: nobody in the film is funny. Their skills are respectable but nothing more, and their ideas seem standard. Somebody might sidle up and tell me that’s the point here, that we’re celebrating the generic, uninspired performers of the world. But I bet that isn’t the point. We’re supposed to think these people are funny.

Finally, the movie has a great air of hand-me-down. Improv and rock ‘n’ roll have been around for 60 years. The film is cast with children aged 31 and 33 and 34, and they’re doing what people’s grandparents were doing. That may be good for production of Scotch or hand-stitched sweaters, but it seems not so good for the inspired shifting of established boundaries, or however you define smart-guy comedy. The kids have never noticed. They still roll about on the floor in what is now the time-old manner, horsing around with their funny faces and weird voices. Well, what do you want. Here they are, bumping into middle age, and they still say “Mr. Kaufman” to their friend’s dad, the bunch of them in their blue jeans and t-shirts. Childhood has grown old in the post-boomer world. Everything has, but at least somebody can do a neat job of movie-making. Mike Birbiglia did. Take that for what it’s worth.

Wrong about Tolstoy.  I got mouthy about Leo Tolstoy and said kids didn’t like him. This was surmise on my part. The next day I watched a documentary on YouTube in which an aged Russian fellow assured the camera that Tolstoy had been a great companion to him when the aged fellow was a small child. My intuitive stab—based on the idea that anyone who says kids are especially perceptive must be a Wally, and therefore no fun for kids—had been thwarted by first-hand testimony. On viewing the documentary again, I learned that the old Russian fellow was Tolstoy’s daughter Alexandra. This in no way counts against her recollections, so I must accept my lesson. Not all intuitive stabs are based on a prejudice, but this one was, and I guess that was the problem.