What the box-office bomb might’ve been. 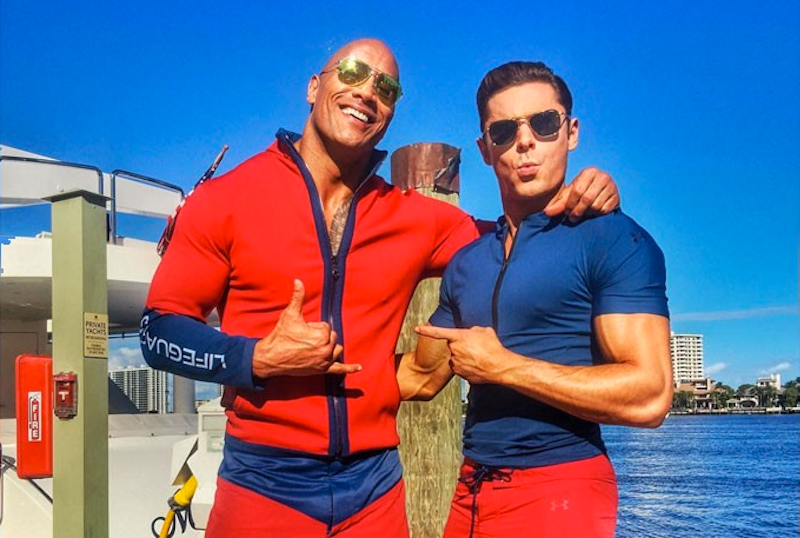 Baywatch is a turd. With a weak plot, poor editing, and too much dick humor, the film earns its 19 percent Rotten Tomatoes score.

Part of the disappointment is that Baywatch could’ve been so much more—a splashy, sexy, but also smart summer movie. All the producers had to do was consult a Baywatch fan and good professional script doctor—like myself.

The plot of Baywatch is simple, which doesn’t mean bad. Legendary lifeguard Mitch Buchannon (Dwayne “The Rock” Johnson) is the guardian of Emerald Bay, a beach resort somewhere in California (but shot in Florida). Mitch isn’t the tough but compassionate head coach of his team of life-savers, but conflicts with new recruit for Matt Brody (Zac Efron), a disgraced Olympic swimmer who’s there to boost the p.r. of the beach. Mitch is also preoccupied investigating the rise of the drug flakka on his beach and its possible ties to wealthy club owner Victoria Leeds (Priyanka Chopra).

Brody, it’s revealed late in the film, is the product of a series of foster homes. This accounts for his poor attitude and drinking problem, the later of which results in him ganging the nickname “the vomit comet” for the time he blew a race by barfing in the pool during an Olympic match.

This is the key that could have unlocked a great Baywatch movie, had screenwriters Damian Shannon and Mark Swift simply put in more effort. Baywatch is a redemption tale about Brody, with the cops and robbers stuff added for excitement. Instead of having this revealed in a conversation, you show it, and early in the film. Brody is seen as a kid, dealing with the chaos of a foster home. His escape is a nearby pool, which he flees to at night. In these charged flashbacks, like the great Beethoven scheme in Immortal Beloved, we see Brody becoming stronger and connecting with what Carl Jung called the “true self” in the water at night. He builds his body even as his psyche remains undeveloped. This is Baywatch, so you don’t have to go overboard with melodrama. It’s just a basic building block of story and motivation you can use.

It would also fit in with Brody’s conflict with Mitch. In the opening, and best, scene of Baywatch, Mitch performs a spectacular save of a power sailer. The dazed city looks up at him and says, “Are you Batman?” Indeed, Mitch is a Batman of the bay, a man who has the talent and resources to be doing something else—and a soft spot for orphans—but feels an obligation to his “family” at Emerald Bay. As with Brody, we need to be shown why Mitch has this loyalty. Let’s see a flashback where he decides to leave Baywatch, only to see a kid nearly drown because his replacement just doesn’t know this aquatic Gotham the way Mitch does. It’s a movie theme going back to Casablanca and last seen in Hail Caesar! It’s the man who’s caught in a dilemma and has to decide to do his duty. Mitch is the irreplaceable foster father of Baywatch. We just needed the screenwriters and director Seth Gordon to show it to us.

The rough, unfinished Brody doesn’t only need animus, the focused male energy the Rock represents, but anima, female energy. This is where the Baywatch babes come in. The female protagonists—played by Kelly Rohrbach, Alexandra Daddario and Ilfenesh Hadera—are too thin, even by Baywatch standards. Give one of them a side interest, the way Rosie Perez was hooked on Jeopardy! in White Men Can’t Jump. Ilfenesh Hadera, who is underused in Baywatch as Stephanie Holden and has the most captivating face in the entire cast, can be also a mentor to Brody. Give Stephanie an interest in ballroom dancing. Her dream is to get on Dancing with the Stars. While Brody is broken and rebuilt by Mitch, she teaches him how to dance, guiding him on the right way to negotiate and respect he mystery of femininity even as she is a powerhouse lifesaver on the beach. At the end of the film Stephanie gets her beak, getting asked to appear on Dancing with the Stars. Her partner? Original Baywatch beefcake David Hasselhoff.

You can have this plus the drug-dealing villain Victoria Leeds, played by stunner Priyanka Chopra. Adding some meat to the characters, actually showing their backstories and motivations, means you could lose some of the awful attempts at comedy, the dick and boob jokes that are the currency of modern Hollywood.

Baywatch has bombed, but word is they are already planning a sequel.