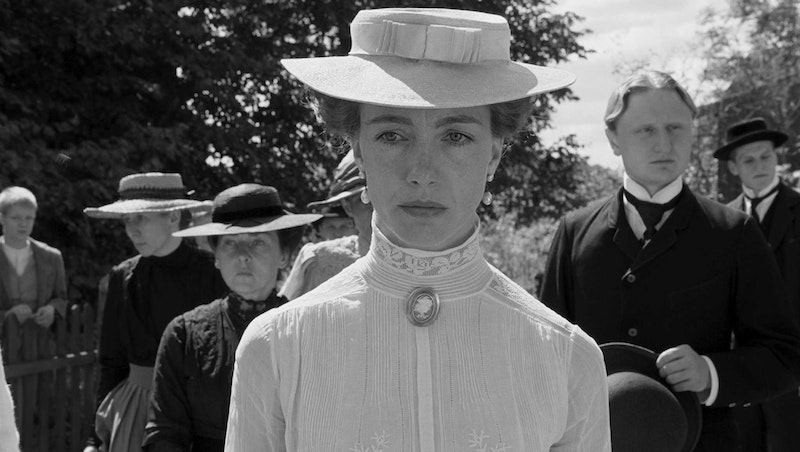 This is part of a series on fascism in film. The last entry on 300 is here.

Critics have consistently seen Michael Haneke's The White Ribbon (2009) as a film about the Nazis. A.O. Scott refers to the movie as "a study of child abuse, class resentment, and incipient fascism." Roger Ebert acknowledges the theme while half disavowing it: "It's too simple to say the film is about the origins of Nazism." Haneke has performed a similar maneuver in interviews, noting, "I don't want it to be understood solely as a film about German fascism"—which suggests that it can be seen, at least partially, as a film about that topic.

While the film may evoke Nazism for viewers, however, its setting is well before the time of Hitler. The black and white visuals emphasize that this is a period piece, about the village of Eichwald, Germany, shortly before World War I. The village is pleasant on the surface. It’s a small farming town, where everybody knows everyone else. The narrator—a schoolteacher looking back through the mists of time—sounds warm and kind.

But sadism, violence, and cruelty run through the town like its own unfinished dirt roads. At the opening of the film, someone has strung a wire across the path where the doctor (Rainer Bock) rides; he falls and spends months in the hospital. When he returns, we discover that he is in an abusive sexual relationship with his neighbor, the midwife (Suzanne Lothat), as well as his own 14-year-old daughter Anna (Roxanne Duran). Someone kidnaps the Baron's child (Fion Mutert) and whips him badly with a cane. Later someone kidnaps the midwife's retarded son and nearly blinds him. A farmer's wife falls to her death, probably due to the Baron's negligence. The pastor (Burghart Klaubner) is a brutal man who ties his son's hands to the bedposts every night to prevent him from masturbating and humiliates his daughter in front of her class for no reason. The daughter, Klara (Maria-Victoria Dragus) crucifies her father's songbird with a pair of scissors. She and the son Martin (Leonard Proxauf) may be responsible for the tripwire and the canings—or may not be.

If the mystery were resolved, this would be a genre tale; the ambiguity is central to the film's universal acclaim, and to its Palm d'Or at Cannes. It's also central to the film's message. The White Ribbon is a brief for collective guilt; there’s no one person responsible for the village's bleak cruelty. Even more than on Murder on the Orient Express, everyone is the criminal. The town's remorseless patriarchy and joyless, duty-bound religion create an atmosphere of repression, guilt, and bile. The Baron's negligence leads to the death of a farmer's wife, the farmer's son destroys the Baron's cabbage patch in revenge, the Baron refuses to hire the farmer, the farmer kills himself—a closed circuit of vindictiveness and despair. "I'm leaving so the children don't grow up in surroundings that are dominated by malice, envy, apathy and brutality," the Baron's wife (Ursina Lardi) declares with buttoned-up venom. Meanwhile Klara, Martin and the other children in town lurk around sites of disaster like polite, glinty-eyed, grey crows.

Haneke treats evil as a kind of social pathology. His clinical camera—staring blankly at a child carrying the cane to his father, or at a bird impaled on scissors—shows the stark truth of deviance. The sober anatomization of aberration fits neatly into prevalent views of German guilt, which have over the years centered on ideas about authoritarian personality and group acquiescence. The children, poisoned by repression, seek to visit their frustration, anger, and impotent fury on scapegoats, whether those scapegoats are the rich or the disabled. This is the cauldron that bore Hitler and his enablers. Or at least, that's a theory.

It's not very convincing, though. The German town in The White Ribbon is certainly a bleak, vicious place. But were German towns before World War I really significantly more bleak and vicious than, say, the Italian town to which the Baron's wife wants to flee? Haneke presents the town's evil as linked to its ignorance and crabbed religious insularity. But Hitler's eugenics policies weren't ignorant or backwards looking; they were at the forefront of international science at the time. Feudalism was terrible and Nazism was terrible. But they weren't the same.

Again, Haneke has been leery of linking The White Ribbon to Nazism specifically. You could see it instead as a story about evil in general. But without the connection to the specific historical atrocities to come, its intellectual and moral weight dwindles. It becomes a literary fiction horror story, about a particular possessed town, and the rot therein. That rot can be generalized as patriarchy—but the patriarchy of pre-War Germany, with its feudal relationships and openly accepted beating of children, looks somewhat different than the patriarchy we've got now. If The White Ribbon isn't relevant because of Hitler, why exactly is it relevant?

I can see Haneke's film having a different resonance in Germany, or perhaps in Britain. In the United States, though, in 2017, the widespread critical praise seems overly fulsome, and too easy. The collective guilt of Eichwald isn't especially pointed when it's not your collective guilt. An evil that's a couple steps removed from racial bigotry and populist nationalism may have something to do with the Nazis. But it doesn't really resonate with America's particular twist on fascism.

The title refers to white ribbons which the pastor pins to his children, to remind them to be innocent—or, really, to remind them of their guilt and their father's mistrust. The White Ribbon, the film, is supposed to serve a similar purpose, reminding Germany that even before it committed atrocities, it was not pure. Watching from Trump's United States, though, it seems like Haneke pinned the ribbon to someone else.