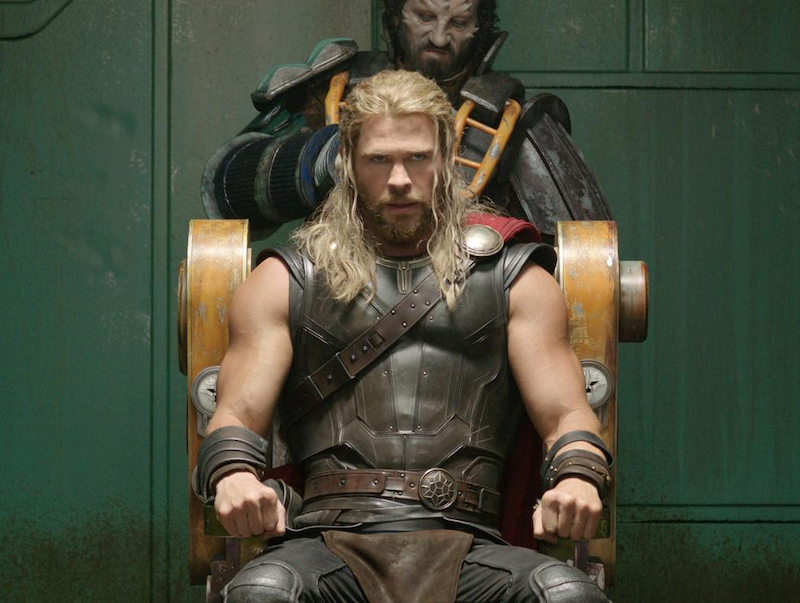 This is part of a series on screwball comedies. The previous essay on It Happened One Night is here.

Is Thor: Ragnarok a screwball comedy?

There are some obvious ways in which the new Thor film doesn't fit into the screwball genre. It's set in an inter-dimensional fantasy space setting rather than in the Depression. And screwball comedies are usually built around a romance plot. Thor: Ragnarok is unusual among Marvel films, and action films, and big budget films in general, in that there's no love story to speak of.

The only mention of romance in the movie is an offhand comment that Thor (Chris Hemsworth) broke up with Jane, the scientist he was seeing in the first two Thor films. Lady Sif, perhaps another love interest for Thor in the second movie, is conspicuously absent, and while there’s some suggestion of romantic tension between Thor and Valkyrie (Tessa Thompson) it never amounts to more than a couple of lingering looks.

But there’s one element of screwball comedy that is front and center in Ragnarok. Men being un-manned.

Screwball comedies reveled in undermining and humiliating their male leads. In films like Bringing Up Baby and Monkey Business, Cary Grant bumbled through physical contretemps as he was shoved into frilly bathrobes, dumped into mud holes, and tormented by enforced dancing. Rather than portraying powerful male leads who sweep women off their feet, screwball comedies present men who trip over their own nether appendages and collapse in flaccid heaps.

Hemsworth isn't exactly Grant in his classic screwball roles; he's neither professorial nor meek. But Thor's bluff self-confidence mostly serves to make his screwball pratfalls hit with a heightened "splat!" The most flagrant example is Thor's first encounter with Hela, when she catches his hammer and grinds it to powder in her hands in a flagrant and painful castration metaphor. But Thor is also casually bested by Dr. Strange (Benedict Cumberbatch) who mystically bamboozles the God of Thunder by making rooms appear and disappear and dumping him onto a settee.

And then there's Valkyrie, who electrocutes Thor into submission so often it practically becomes a cliché. Often Thor doesn't even need anyone else to humble himself; in one sad scene he confidently throws a ball against a pane of glass to bust free of his prison, and is knocked to the ground when the ball ricochets off. There's another castration metaphor when the barbers on a prison planet chop off his flowing locks, causing Thor to plead pitifully, "Please don't cut my hair off!" They do anyway.

Sexy men are supposed to be sexy because they're strong and capable. So, Grant and Hemsworth, who are weak and incompetent, should be emasculated anti-sex symbols. That’s adamantly not the case. In part, that's simply due to looks; Grant and Hemsworth are both attractive enough that they could cover themselves in sewage and still be movie-star draws.

In fact, as the screwball demonstrates, covering yourself in sewage, or the equivalent, and doing it with panache, makes you sexier. Thor gets his hammer busted and his hair cut and bashes himself in the face with a ball, but he remains chipper and game. In fact, he enjoys the indignities heaped upon him. Hemsworth's performance of incompetence is dazzling; he's an expert at being inexpert. He (like Grant) is so utterly confident that he doesn't mind looking like a stooge. He's so cool he doesn't have to be cool, which makes him all the more cool.

Screwball comedies give women a chance to be witty, determined, and masterful, but they also gave men a chance to be ineffectual and ridiculous. Hemsworth relishes the opportunity to shuck off the usual dull heroic competent boilerplate, and play Thor as inept doofus.

Despite the screwball elements, Thor: Ragnarok is a big-budget superhero fest. Hemsworth doesn't particularly want to self-actualize, but the moviemakers figure it's what's expected of him, and so Thor discovers he has powers even without the hammer and regains faith in himself and wins the day. The wonderful trailers, in which Thor is thumped and is left at the end waiting to get thumped even further, are truer to the film's vision than the film itself, which ends up a formulaic exercise.