The Romance of Class War

Woman and economic anxiety in It Happened One Night. 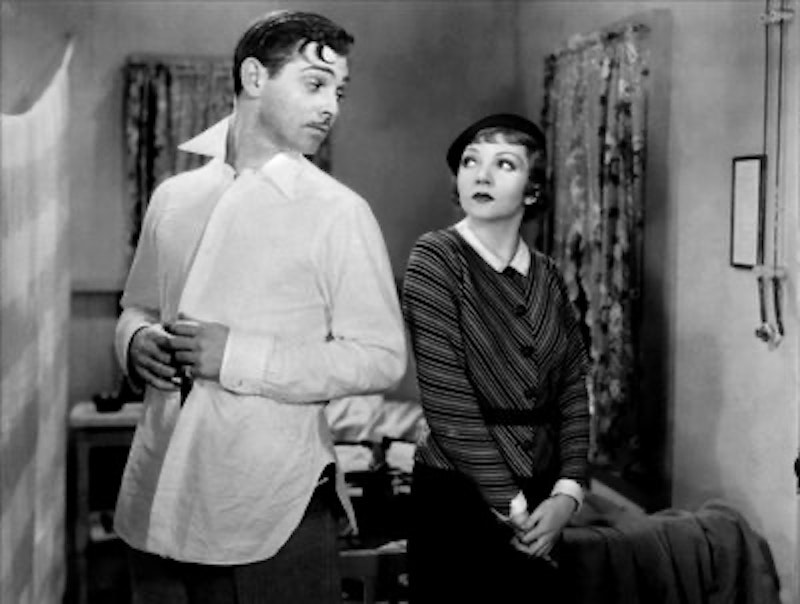 This is part of a series on screwball comedies. The previous essay on The Palm Beach Story is here.

Did Donald Trump win the presidency because of economic anxiety? Or did he win because of retrograde sexism, with men (and women too) voting to show women that men are still boss?

Frank Capra's hugely successful It Happened One Night from 1934 was produced before Trump and Hillary Clinton were born. But its narrative, which conflates class war with a battle of the sexes, neatly answers the economics-vs.-sexism question by demonstrating that it's not a question at all. Economic anxiety and male status anxiety were inseparable in the Great Depression, and they're inseparable now, as we grind along with an endless not-quite recovery and reduced expectations of the Great Recession. Making Men Manly Again means earning good wages while a woman looks on adoringly—or else.

The economic anxiety and gendered panic in It Happened One Night centers on Ellie Andrews (Claudette Colbert), a wealthy heiress who runs away from her father (Walter Connolly) to marry aviator King Westley (Jameson Thomas). While on the road to get to King in New York, Ellie meets newspaper reporter Peter Warne (Clark Gable.) Warne decides to help Ellie escape her father's detectives in exchange for the exclusive scoop on her escape and her trip. They squabble, become friends, fall in love, experience misunderstandings, and eventually, after an annulment of the marriage with King, get to that happy ending you knew was coming all along.

Buried none too deep underneath the sweet story of burgeoning love, though, is an unpleasant and abusive rage. Ellie is headstrong, determined, and surprisingly resourceful. Her father’s a paranoid control freak, who won't even let her go shopping without bodyguards. Before the start of the film, she managed to elude him and elope with King, but his detectives immediately captured her, and in the first scene of the film she's held prisoner on her father's yacht. She goes on a hunger strike to get him to relent, and when that doesn't work, dives over the side of the boat and swims gamely away, eluding her father's minions because, as he says, "She's too smart for you!"

Ellie's father is an abusive jerk, and Ellie foils him through brains, bravery and determination. You'd think the message of the film would be, "Go Ellie!" But it isn't. Instead, after that initial flurry, the movie settles into chastising and humiliating its heroine. Ellie escapes with no possessions, clothes or money, and she's still on the run. She manages nonetheless to get a ticket on a bus, where she meets Peter Warne—who immediately starts insulting her. When she very reasonably offers to pay him to help her, he completely freaks out, berating her mercilessly. "You know, I had you pegged right from the jump. Just a spoiled brat of a rich father. The only way you get anything is to buy it, isn't it? You're in a jam and all you can think of is your money," he sneers. Ultimately he agrees to help her anyway—in order to get an exclusive story! He's as mercenary as she is; the difference is that she's straightforward about what she wants and what she's willing to pay, whereas he presents himself as aiding her out of gallantry before eventually admitting that his help comes with the price tag of her privacy.

Why is Peter such an asshole? The answer is economic anxiety—which is inextricably connected to his perception of himself as a man. At the beginning of the film, Peter gets fired from his newspaper job—an incident embarrassing enough that he conceals it from his colleagues. He’s angry at Ellie's offer to pay him in no small part because he actually needs the money. Though he excoriates her for being vain, shallow and silly, his ego is an open running sore. His refusal to treat Ellie as an equal, and his need for validation, almost derails their romance. Ellie declares she loves him (for unclear reasons), but instead of responding in kind, he leaves her in their unpaid-for hotel room in the middle of the night to race off to New York so he can sell their story to his editor. A guy can't propose if he doesn't have any money, he explains. Ellie has plenty of money for both of them, but Peter needs to be in control and independent. So he peddles the details of Ellie's love affair without her consent.

The film doesn't see Peter as a jerk, though. His actions and reactions are presented as entirely natural. He's one of the common people, and Capra loves the common people. Probably the most Capra-esque sequence in the film is an impromptu sing-along on the bus, with different passengers stepping up to belt out a verse of a mildly ribald song. It encapsulates Capra's passion for the American (white) volk, who are limited in means but great of heart. Ellie herself is swept along in the tuneful bonhomie. Losing her wealth (temporarily) has brought her down to the level of the common people: she uses outdoor showers; she hitchhikes; she sleeps on hay in the open air. The film is a fantasy of leveling. The high are brought low the better to celebrate the panorama of democratic egalitarianism.

The film mistrusts wealth, but not because wealth is exploitive in itself—there are no Dickensian scenes of worker exploitation. Nor is Ellie's father a villain. She speaks eloquently about how he has restricted her, but ultimately the film portrays him as an appealing figure, understandably and genuinely concerned for his daughter, and possessed of beneficent patriarchal wisdom. Capitalism doesn’t produce systematic injustices or evil capitalists. The only problem with the unequal distribution of resources is that Ellie is richer than Peter—an imbalance that’s rectified, finally, when he marries her. Patriarchy can fix poverty, if only women like Ellie would learn their place, and fall in love with the men who insult them. Which is why a wealthy jerk like Donald Trump gets to call himself anti-elitist, so long as he makes it clear that he hates women.