The film provides an intimate look. 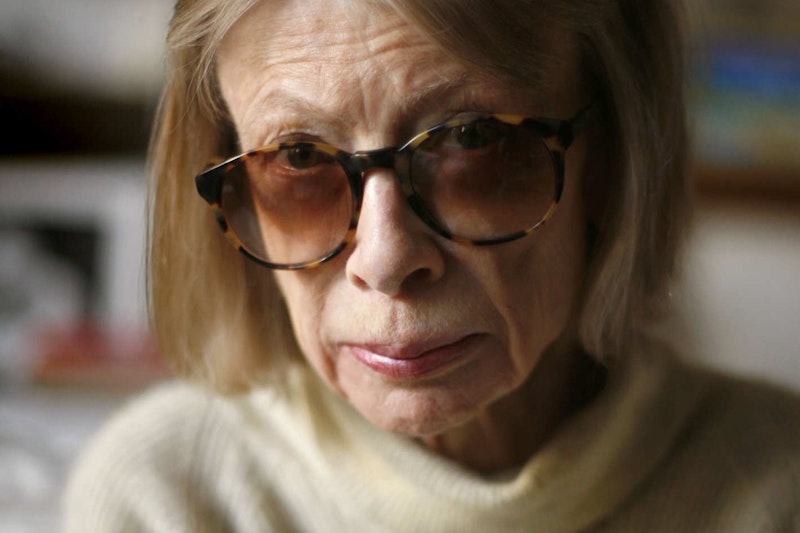 Few photos of authors have reached “iconic” status over the years. Albert Camus is in that exclusive club, as are Oscar Wilde, James Joyce and a handful of others. Writers aren't athletes, Marxist revolutionaries or rock stars. Photographs of them have little interest. Joan Didion is a member of that elite literary crew who were able to break through that ceiling. She did it with that photo of her in her Corvette Stingray, with a cigarette dangling from her fingers at just the right angle.

Few other writers have their image emblazoned on the back of a $1,200 leather jacket. Didion is a writer whose career lends itself easily to the documentary film format. During her extraordinary career as a novelist, essayist, screenwriter, playwright, and memoirist, she had the knack of being in the right place at the right time. While hanging out with The Doors, doing jailhouse interviews with Charles Manson girl Linda Kasabian, and traveling to El Salvador to cover its civil war in 1982, Didion helped shaped the public's perception of the societal upheaval in the 1960s and '70s. She fulfilled the demand for people with a nose for the Zeitgeist and the originality of thought to interpret it.

Didion’s so mythologized that her persona often threatens to eclipse her remarkable and extensive body of work. Her nephew, actor/director Griffin Dunne, has captured her life and work on film, and the results can be seen with his Kickstarter-funded film, The Center Will Not Hold, now out on Netflix. Dunne’s interview with the frail, gaunt 82-year-old Didion, with her bright red lipstick and extravagant arm gestures, is the foundation of his documentary. He fleshes out the rest with still photos, archival footage, and interviews with The New Yorker's Hilton Als and Calvin Trillin, playwright David Hare, actress Vanessa Redgrave, fashion maven Anna Wintour, and other notables.

Early in the film, the Sacramento-born author explains how she ended up in New York City working for Vogue after graduating from UC-Berkeley in 1956, and why the city had become unbearable to her by the time she decided to leave in 1964. She and her husband/writing partner, John Gregory Dunne, moved to L.A. The couple soon made their way to the center of Hollywood's talent élite. They attended parties, and threw them too, with guests like Janis Joplin and Rod Stewart showing up. Joplin wanted a Brandy & Benedictine and a water tumbler, Didion recalls, because “music people never wanted ordinary drinks. They wanted sake, or Champagne cocktails, or tequila neat.” At one party, she tells Griffin Dunne, she went up to check on her young daughter Quintana and was horrified to find drugs on the floor of her bedroom.

The film portrays good years in L.A., with the literary couple enjoying much success. Didion would publish two acclaimed collections of essays, Slouching Towards Bethlehem and The White Album, and her second novel, Play It As It Lays in those years. When it shifts back to New York City, where they'd decided to return to after 20 years, things take a dark turn. Quintana gets married and soon contracts a mysterious life-threatening illness. John Gregory Dunne, who was emotionally distraught over the situation, then died suddenly of a heart attack at the dining room table while Quintana was still in the hospital. Upon her release, she'd pass away in less than two years.

Having lost the family she valued so much, Didion coped with her double tragedy (although she says she didn't plan it that way) by writing two memoirs. First was The Year of Magical Thinking, about the death of her husband, and then Blue Nights, about the death of her daughter. She wrote a stage version of The Year of Magical Thinking, directed by David Hare, who explains that Didion was down to 75 pounds by that time, so he had to devise ways of getting her to eat.

A filmmaker so close to his subject is a double-edged sword, but Griffin Dunne was never going to make anything other than a valentine to his aunt. Dunne was able to get Didion in front of the camera for his project, something another director probably couldn't have achieved. She’s obviously pleased to talk with him, and her trust allows her to open up. In the most poignant moment, Didion talks of her grief over losing Quintana, compounded by the fact that she was given her adopted daughter so she'd take care of her, but she'd failed to complete her appointed task. She’s harsh on herself with this self-evaluation, but it reveals that she's still harboring some lingering guilt for encouraging her to return to California after she left the hospital. Quintana fell down getting off the plane in L.A., which put her into a coma.

Didion offers revelations throughout the film, about John Gregory Dunne and Quintana, for example, that fill in key blanks about her life. Without the author’s narrative, The Center Will Not Hold would merely be a competent documentary.